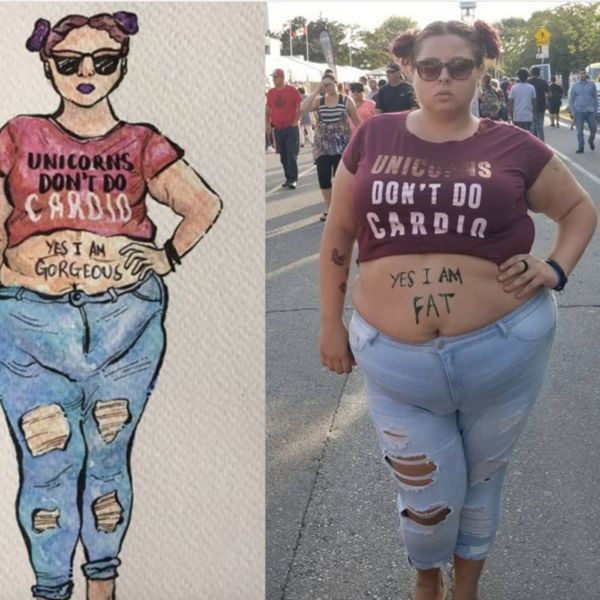 While many brands talk the talk about being “body positive,” it’s less common to see them walk the walk in supporting their plus-size customer base, online or off. That’s why it was such a surprise when, in August, the UK-based designer lingerie brand Playful Promises featured the plus-size model Jewelz Mazzei front and center on their Instagram page, rocking one of their lingerie sets like the badass queen that she is. But while many people were thrilled to see Mazzei strut her stuff to represent size diversity, trolls and haters were not having any of it.

We absolutely love seeing our customer photos, and @jewelzjourney is looking hot in our Tamara Rust set (which is currently in our SALE). Shot by @provocateur_images

Angry comments on the pic poured in. They ranged from “unfollowed” to name-calling, to “I’m concerned for her.” Pretty bad, right?

If there’s one thing a brand doesn’t like, it’s negative attention. For this reason, other companies may have opted to take down the photo to avoid drama and appease the vocal, angry minority. Instead, Playful Promises stepped up and deleted each and every one of the hateful messages, and posted the following message to explain why:

Anna Sampson, a brand manager for Playful Promises, explains that this community management effort seemed like a no brainer to the team. She tells us via email, “Why would any brand NOT want to remove this hatred from their pages? Why would you want to allow bullying to be linked to your product?”

Another stunning shot of @pureivorydotca rocking our Emerald set (from stockist @broadlingerie), shot by @craveboudoir!

Sampson explains that Playful Promises’ goal is to create a safe space for women to feel confident to express themselves and their sexuality, regardless of what they look like.

“Women are not treated well on the internet,” says Sampson. “It’s irresponsible for brands not to stand up for their customers; showcasing things like diversity and support are important. As a consumer, I don’t want to browse lingerie and see reminders of how much society values the slim, white cisgender woman, I want to see reminders of how amazingly diverse we are!”

This attention to inclusivity hasn’t gone unnoticed. Mazzei tells us that she was shocked to be asked to model for the now-controversial shoot, despite being aware of the brand’s plus-size offerings.

“Even when brands sell clothes that are sizes 20-32, they don’t typically showcase those models online,” the model tells us. “To have Playful Promises represent and stand behind my size 22 body is an incredible win.”

Mazzei has admitted that she is very familiar with body shaming and negative feedback to images she shares on Instagram — both from her personal account, jewelzjourney, and through her body positive Instagram account, bigandblunt. Mazzei tells us that when she posts images via Instagram, rather than let that negative feedback affect her, she hopes that someone viewing her images will be inspired to be free and confident and love their body like she does.

YES I AM GORGEOUS, and YES I AM FAT 👏💋🤞❤ Whomever told you that those two things don't correlate lied to you! Thank you so much @thehashybashy for this incredible #fanart, it's perfect 🖌😍. #bigandblunt #igot99problemsbutmyfataintone #fuckfatphobia #bigarmnoharm #honormycurves #loveyourbody

Many brands can learn from how Playful Promises handled this situation. If we want to expand the body positivity movement, we must understand and learn that the movement will only be a success once we include all shapes, sizes, abilities, and races — and, most importantly, stand behind them.

How do you think Playful Promises handled the trolls? Let us know @BritandCo!

Amanda Scriver
Amanda Scriver is a passionate storyteller and body image advocate based out of Toronto, Canada. When she isn't writing for various publications, she finds time to Keep Up With The Kardashians while partaking in life's greatest pleasure: the chip buffet. Don't ask her what her favorite restaurant is, it's complicated
Body Positive
Diversity
Body Positive Every Body inclusivity Plus Size
More From Diversity