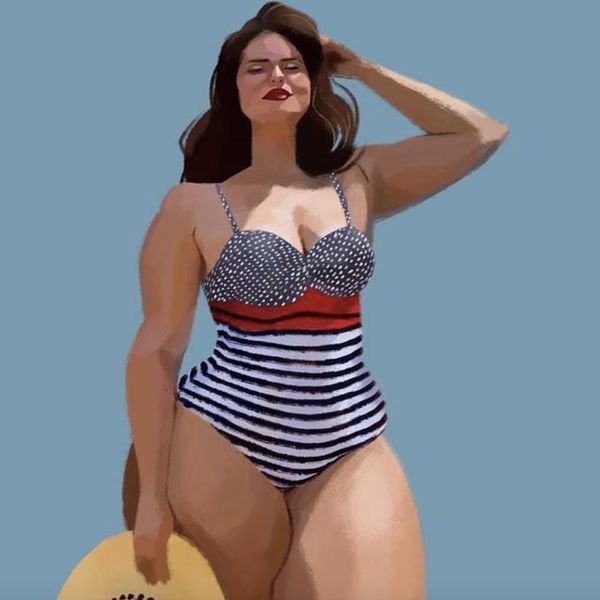 Animator Pierre Rütz began painting his series of curvy, full-figured women as an artistic exercise, posting them to Instagram on a whim and not expecting much to come of it. It was the response he got from fans that encouraged him to develop the paintings into a social media project that celebrates the kinds of strong, beautiful bodies represented far too infrequently in fashion, film, and pop culture. His gorgeous, body-positive drawings star familiar faces like Orange Is the New Black's Danielle Brooks and Aerie brand ambassador and Global Role Model, Iskra Lawrence. We asked Rütz about the importance of broadening outdated definitions of beauty and how he hopes his work will one day influence his children.

You're a father to two young daughters. Are they one of the reasons you make this kind of art? So that they can see a variety of shapes and sizes represented as being beautiful?

My actual job is 2D and 3D animator which means I don't get to paint a lot, so I decided to do these little sketches with the little free time I have to practice painting with lights and shadows. As a subject, I chose to paint women because it's my favorite thing to draw, especially curvy women.

I'm really glad to contribute even a little bit to promote the beauty of women with different shapes and sizes than the ones that we are accustomed to seeing everywhere, whether it be on television or in magazines. My daughters are a little young as of yet to be concerned with such things, but I certainly hope that these drawings I make will help them be confident with whatever “shape" they grow up with.

Your curvy Wonder Woman is really great. Are you concerned with how the lack of diverse representations of women's bodies in mainstream pop culture affects young girls' perception of their own bodies?

I am, of course. I think that young girls are easily influenced. They are bombarded every day with the stereotype of the “beautiful" woman or girl everywhere they look, through advertising, cinema, etc. When they see those images, and realize that they don't look that way, they might think that there's something wrong with them or that they aren't beautiful. It's particularly dangerous with movements like the “thigh gap phenomenon" that happened, when was it, two years ago? Young girls were starving themselves because they didn't realize that their individual physique wouldn't permit them to achieve that gap no matter how much weight they lost.

I am happy though to see that plus-size models are getting more and more noticed and appreciated. In cinema also, there are now a few incredible curvy actresses with leading roles, playing strong, desirable characters — Christina Hendricks in Mad Men and Danielle Brooks from Orange Is the New Black. We might have a new Renaissance era coming, which would be a good thing!

There's a real sense of strength and self-confidence exhibited by the women in your drawings. Can you talk about why you draw them that way?

I guess it's the way I see women in general. Between my mother, my two sisters, my wife, and my two daughters, I am surrounded by women. Looking at them, I am utterly convinced that women are stronger than men in many aspects. They have to deal with much more than I do, at least. I'm an average 31-year-old, white, European man. I have it pretty easy. Being a woman — of any color or size — you're sure to regularly be the subject of some prejudice or other. I am particularly amazed by my wife's strength. I'm not sure I have that kind of strength myself.

You draw women from a range of different ethnicities — is that a conscious choice? To portray another underrepresented segment of the population?

As an artist, it is something that you have to be conscious of, especially if you work as a character-designer for animated films where you're job is to create and design the characters of the movie. You naturally draw what you are familiar with; if you're white you tend to draw white characters, so you have to keep in mind that if you want to represent the world as it is you have to create characters of different ethnicities.

In my case, it's a bit different. I draw women that inspire me or that I find beautiful, and color or ethnicity are not factors in that regard to me so I guess I do it naturally.

Corrina Allen
Corrina Allen is a film + television + travel writer from Toronto. Her journalistic goals include a backstage interview with David Byrne, the fictional character she identifies most closely with is John Wick, and her favorite dead person is Vladimir Nabokov. She never, ever Instagrams photos of her food (just her dog).
Art
Diversity
Art Body Positive Every Body Instagram Instagrams to Follow
More From Diversity