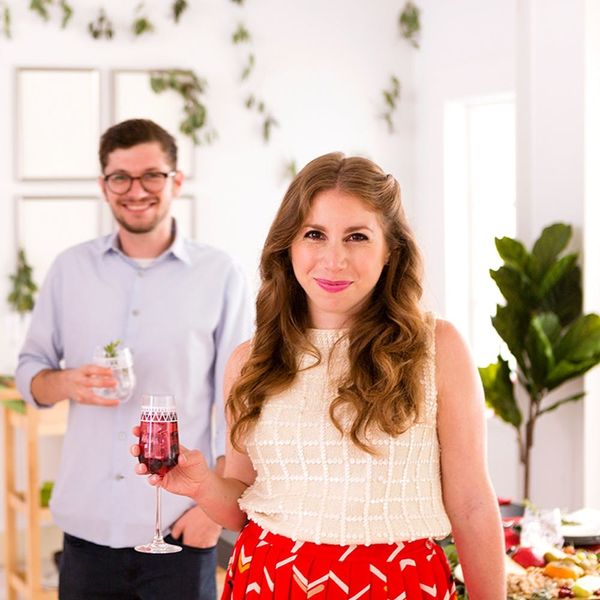 Is this the year you make the leap and become your own boss? Having a side hustle could be the way you do it. So if you love to cook for a crowd, know how to bake killer cookies, or want to bottle the salsa that friends and coworkers all say you should sell, jam on. To help you get started or take your business to the next level, we tapped five female entrepreneurs in the food industry to share their best tips for creating a successful side hustle.

Getting to the point where your side hustle is your main source of income takes time. Megan Gordon, founder of Marge Granola, says, “Honestly, unless you have an impressive financial cushion, give yourself a break and start slow (preferably even while working for someone else to ensure you have some solid income). I see a lot of under-funded businesses and struggling small businesses, and making smart fiscal decisions for the company can become really hard if you’re in a desperate spot yourself.” Gordon started her granola company in 2010 after making a transition from teaching in a high school to food writing and catering. She sold Marge Granola in 2017, all the while writing about food for income and as a creative outlet. Gordon stresses the importance of keeping an eye on finances. “While it’s awesome following your passion and seeing a dream through, it’s important to realize you may not pay yourself for at least a year (I waited two years), so as unsexy as it is to think through the financial reality, it is really critical,” she says.

“Today there are hundreds of gluten-free mix companies alone,” says Beth Hillson. When she started Gluten-Free Pantry in 1992, none of that existed. She’d been recently diagnosed with celiac disease and that diagnosis kick-started her packaged mix company, which she ran from her basement for the first three years so she could keep costs down and take care of her son until he became school-aged. It took two years to make it her primary business, and she eventually sold the company in 2005. Over time and as a result of building a customer base, she found community with her customers too. “Gluten Free Pantry filled an important need for them. As Gluten Free Pantry grew, our relationships grew stronger. Our customers became my best sales force,” Hillson says.

Allow yourself freedom to pivot

Gordon didn’t start with granola as the focus of her company. Instead, Marge began as a baked goods company which offered pies, cookies, and brownies. “I narrowed it down to just granola a few years in as it was extremely popular and shelf-stable, and I could see a way to market to wholesale clients (pie is hard!),” says Gordon. “Plus, I became tired of all the overly sweet granola and cereal on store shelves, and knew I could make a superior product.”

Just met the new neighbors for the first time and happened to be wearing this shirt. At least they'll know what they're in for with us next door! 😋 #Glutenfree #ilovetobake #glutenfreebaking #celiac

Be a part of your customer market

Jules Shepard of gfJules says, “This business is too hard, too time consuming, [and] too draining to do it because you think you’re going to make a buck. You may, or may not, but your heart has to be in it to get you through the tough times, and the best way I know to have your heart in it is to be a part of the group you’re serving.” Shepard started her original flour company in 2008 before dissolving it over a disagreement with investors and later creating gfJules, a gluten-free flour company, in 2014. She currently augments her flour business by writing and working as associate editor at Gluten-Free & More magazine, as well as consulting on recipe projects.

Gordon says that when you’re in the planning stages of starting a new business, it’s key to talk to people who are in the field you want to be in. “Don’t be afraid to reach out! You’d be surprised how many people will be willing to talk with you about their journey — or even field specific questions,” says Gordon. She’s paid it forward and finds it inspiring when others reach out with food business questions, as it reminds her of when she started out and the people who helped her.

While she was a full-time graduate student in 2013, Jessica Hilbert co-founded Red Duck Foods, a line of ketchups and BBQ sauces. She and her collaborators wanted to start a company from the ground up, be their own bosses, and set their own schedules. Since then, she’s learned that there’s no way to get around the fact that running your own business is hard. “There will absolutely be times when the water seems like it’s continuing to rise at such a fast rate that you aren’t sure if you can keep your face above its surface,” Hilbert says. “But then you have a really good day and that water level falls just as fast as it seemed to rise.” For the first two years after co-founding the company, she worked there part-time, working several “odds and ends jobs” on the side as well for about three years before being solely at Red Duck. Hilbert also emphasizes the importance of sharing the wins and losses of running your own company. “I learned how important it is to really like and respect your team (no matter how big or small) as people first and foremost because it makes the highs taste that much sweeter and the lows that much less bitter,” she says.

Spotted while visiting my old haunt @wholefoodsmarketsf where I used to shop 11 years ago when #adampascal was shooting the #rent movie. Thrilled they carry our @cybelesfreetoeat cookies. We 💖 @wholefoods who were our very first customer!

“Tenacity goes a long way. Many people quit. It’s the ones who hang on who make it,” says Cybele Pascal of Cybele’s Free to Eat, a food-allergy-friendly pasta and cookie company started in 2012 that grew out of her cookbooks and subsequent reader requests. It took her two to three years after conception for her company to become her main thing. “It’s really true that success, the kind that sticks, usually takes a long time to build. Be patient. Know there are cycles. And things shift quickly,” Pascal says. She suggests finding a mentor or two who have been where you want to go and can provide insights about what they’ve learned.

Hey we're at a really huge (!!) factory advising on the printing of new #margegranola boxes

To make her granola company great, Gordon discovered the secret sauce came down to cultivating good relationships across the board. “Food trends come and go, but to really hang in there and become a strong regional (and even national brand), you’ve got to put in your time and connect with people,” she says. By the time she sold her company, Marge Granola, her granola was available in Whole Foods in the Pacific Northwest, as well as in regional grocery chains and nationwide via her website. For her, that meant connecting with customers personally online, [and] strengthening ties in-store with grocery team members knowing “who to call at a particular store if there was an issue and [being able to] chat with them about the weather or their mom’s health.” Connecting in-person when possible with her maple supplier forged a friendship and also helped her better understand the sourcing of the ingredient.

Look who I found in the #press room... the lovely and talented #bethhillson She is such an inspiration as a #ladyboss #author #businessowner and #academic #expowest #editor @glutenfreelivingmag #naturalproductsexpowest #expoblogger #anaheim

Don’t try to do everything yourself

Begin to delegate functions to others so you can free yourself to focus on growing the business,” Beth Hillson says. By the time she sold her company, it had national distribution in natural food and grocery stores, along with international coverage. Growing and scaling her business didn’t mean necessarily adding to the head count, but rather entailed smart thinking about where she could outsource. “Every day hundreds of problems and distractions come up,” she says. “The more you can build resources like a payroll service, co-packer, [and] sales team, the more you can stay focused on the primary goals of the company.”

Over the years of working in the food business, Shepard has learned a valuable lesson: “You have to stand up for yourself and not allow yourself to be put down. You know what you’re capable of, and never let anyone take that from you.”

Getting our Monday morning fix. #coffee and #cookies #FreeFrom

“Female-led businesses have better success rates. So I’ve been told,” says Pascal. “I have an all-female team except for my sales manager. And he grew up with four sisters and a single mother.” Above all, Jessica Hilbert keeps it real. “Don’t forget to laugh. At the end of the day, it’s just ketchup and BBQ sauce. Or cupcakes. Or granola. Or whatever your food business ends up being,” she says.

Find ideas for starting your own side hustle by following us on Instagram!

From Your Site Articles
Annelies Zijderveld
Annelies Zijderveld is the author of Steeped: Recipes Infused with Tea. Her food writing and photos have been featured in Paste Magazine, The Kitchn, TODAY, Darling Magazine, AllRecipes, and other publications, She whisks together food and poetry on her blog, The Food Poet, and on Instagram at @anneliesz.
Adulting
Food
Adulting The Art of the Side Hustle
The Conversation