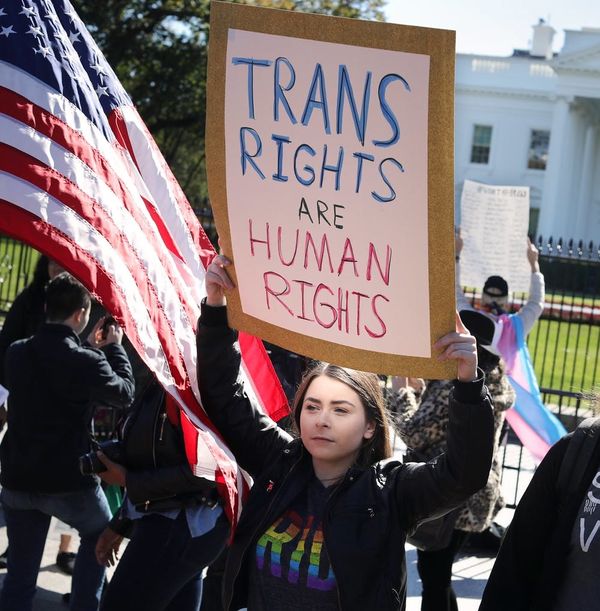 A trans advocacy group in El Salvador says that a Salvadoran transgender woman named Camila was murdered within months of being deported from the US in late 2018. Camila, who, according to the Washington Blade, also went by the name Aurora, reportedly came to the United States in one of last year’s immigrant caravans from Central America. One LGBTQ+ rights advocate told the Blade that “[Camila] migrated to the US because of threats that she had received, but she was deported because [the US] didn’t believe her.”

While official reports on Camila do not cite a hate crime as the cause of her death, and the Blade reports it is “unclear” what exactly happened to Camila, LGBTQ+ rights group believe she was attacked because she is trans.

A Salvadoran trans rights group, Asociación Aspidh Arcoiris Trans, told the Washington Blade that Camila was reported missing at the end of January, and that she had visited a hospital in San Salvador with “multiple injuries” on January 31. Camila died on February 3.

Though trans rights and immigrant rights have always intersected, transgender immigrants and asylum-seekers tend not to receive the same amount of media coverage that other groups — for instance, children — get. Thousands upon thousands of people around the world have protested against the Trump administration‘s inhumane treatment of immigrants, and many have also protested against the administration’s anti-trans policies, but the unique plight of trans and LGBTQ+ newcomers to the US — many of whom are fleeing threats of violence, or even murder, in their countries of origin — often gets left out of mainstream conversation. But that doesn’t mean that nobody is paying attention: Always at the forefront for the fight for their own rights, trans activists themselves blocked streets in New Mexico last year to demand that ICE release all transgender detainees.

Citing Bureau of Justice Statistics, the Center for American Progress reports that LGBTQ+ people are more than twice as likely as the general population to be sexually assaulted while in confinement. LGBTQ+ people in detention are also particularly vulnerable to verbal and physical abuse, extended periods of solitary confinement, and the withholding of critical health care essentials like hormone therapy and HIV medication.

Yet, despite the dangers faced by LGBTQ+ immigrants to the US, the risks of staying at home may be even greater. Same sex activities between consenting adults remain illegal in dozens of countries (mostly in the Middle East, Africa, and Asia), according to the LGBTQ+ info database Equaldex. In some of these places, being gay is punishable by death. In the US and elsewhere, LGBTQ+ individuals face higher rates of violence, abuse, and homicide than the overall population — a grim reality that’s especially true for trans women of color.

While attacks on trans immigrants (and, for that matter, all immigrants) have escalated under the Trump administration, these issues did not begin with Trump. The US has never had a president who has prioritized the human rights of trans people, and while some presidents have been less harsh than others on immigration, none have been true champions of the rights of immigrants.

As is true under the Trump administration, under President Obama — and other presidents before him — ICE detained trans women in detention centers with men, a common practice in prisons and jails throughout the US. According to a Fusion report on trans people incarcerated and deported by the US government, one-fifth of all confirmed cases of sexual abuse in ICE detention are committed against trans women.

Many individuals outside of trans and immigrant communities were minimally aware of the overlap between these issues until an act of protest by one trans immigrant against President Obama went viral in 2015. Jennicet Gutiérrez, a LGBTQ+ and immigrant rights activist, interrupted Obama while he was giving a speech about his accomplishments for LGBTQ+ rights, yelling out, “I am a trans woman… no more deportations!” Obama cut Gutiérrez off and had her escorted out, which garnered praise from many of his fans. However, rights activists who work against deportation and other anti-immigrant policies supported Gutiérrez, and noted President Obama’s nickname, “Deporter in Chief.”

The tragic and outrageous death of Camila in El Salvador highlights how dangerous and insidious anti-immigrant and anti-trans policies and sentiments truly are, and shows how seriously threats against trans people must be taken. If the US is to maintain its reputation as a safe haven, we need to better stand up for the LGBTQ+ asylum-seekers who seek to make this their home.

Elizabeth King
Elizabeth King is a politics, history, and culture writer based in the Twin Cities. She is generally pretty cranky but still enjoys traveling, music from the early 2000's, and plotting the resistance. Feel free to say hi on Twitter at @ekingc or check out some of her work at www.elizabethcking.com.
Immigration
Gender Issues
Immigration LGBTQ Politics
More From Gender Issues