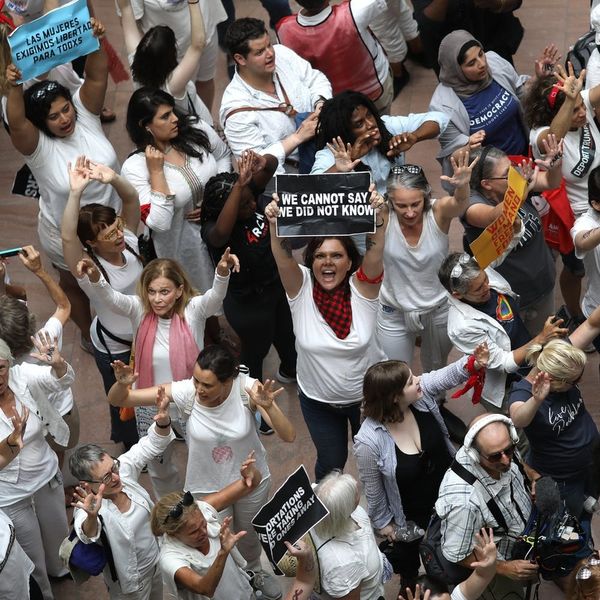 Following the Women’s March #WomenDisobey protest in Washington DC on Thursday, another huge protest is planned for Saturday, June 30 in cities across the country. The Families Belong Together march was called several weeks ago in response to the Trump administration’s cruel “zero tolerance” policy for migrants and asylum-seekers, and to protest ICE’s separation and incarceration of families.

Here’s everything you need to know:

Where is the march happening?

An artist in Texas has made this beautiful image available to anyone who wants it for posters or any other use. We love it and we hope you will too! #FamiliesBelongTogether#FreeOurFuture#EndFamilyDetention pic.twitter.com/QGQlHuwQI3

Cities all around the US are hosting marches on Saturday after the Trump administration separated more than 2,300 kids from their parents at the US-Mexico border. There are even a few events scheduled in Europe! The march is supported by rights groups including the Domestic Workers Alliance and the ACLU. Starting and end times will vary depending on where the march is taking place, so check out this map to see what’s happening and when in your area.

What is this a protest against?

We have a few more graphics for you to use in your social media posts or anywhere else you’d like. #EndFamilyDetention #FamiliesBelongTogether pic.twitter.com/msJWifF1wt

The march is officially dubbed “Families Belong Together,” but the organizers are calling for more than an end to separating families at the border. According to thefamiliesbelong.org, the protest is also a call to action against the Trump administration’s “zero tolerance” policy and “family internment camps.” The march is also demanding that the administration “reunify the children with their parents.”

are there other ways to participate?

Our organizers at the ICE office in Miramar, FL in Broward County #FamiliesBelongTogether pic.twitter.com/6V0h3wWhd4

If you want to participate in Saturday’s actions but aren’t able to make it out to a march, there’s still plenty you can do. First, you can follow along and see what’s happening with the protest by checking out the hashtag #FamiliesBelongTogether across social media. Keeping Families Together also has a Move On petition to end family separation, and they’re still seeking signatures. You can add your name here.

The march organizers are also calling on participants to wear white, but even if you can’t make it, you can sport a white outfit to show solidarity.

Will you be marching today? Let us know on Twitter @BritandCo.

Elizabeth King
Elizabeth King is a politics, history, and culture writer based in the Twin Cities. She is generally pretty cranky but still enjoys traveling, music from the early 2000's, and plotting the resistance. Feel free to say hi on Twitter at @ekingc or check out some of her work at www.elizabethcking.com.
Activism
Politics
Activism Immigration womens march
More From Politics