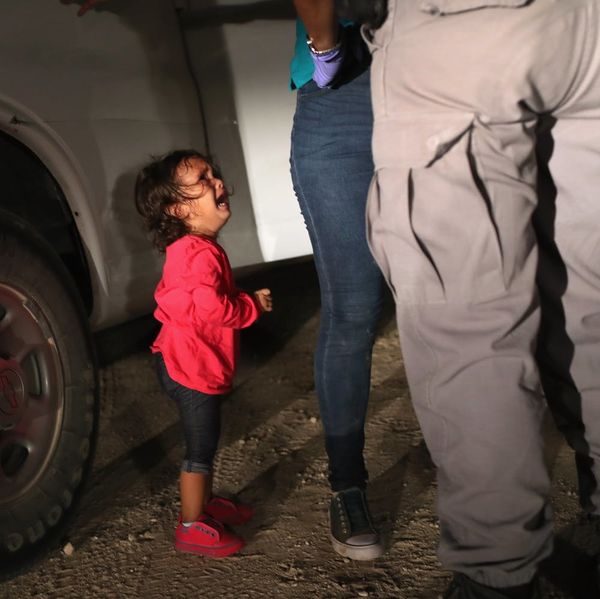 New figures from the Department of Homeland Security show that 1,995 children were separated from 1,940 adults over the six-week period between April 19 and May 31. Attorney General Jeff Sessions announced in early May that US border agents would be separating children from their parents if caught illegally crossing into the country. When asked Thursday about the human rights implications of such drastic law enforcement on children, White House press secretary Sarah Sanders cited the Bible to skirt the answer: “I can say that it is very biblical to enforce the law.” Biblical or not, medical experts are warning against the long-term psychological devastation that border officials are inflicting upon entire families of migrants by forcibly removing children from their parents.

The American Psychiatric Association issued an official statement on May 30 opposing the separation of parents and their children at the border because of the profound physical and mental health risks to the entire family.

“Any forced separation is highly stressful for children and can cause lifelong trauma, as well as an increased risk of other mental illnesses, such as depression, anxiety, and post-traumatic stress disorder (PTSD),” the statement reads. “The evidence is clear that this level of trauma also results in serious medical and health consequences for these children and their caregivers.”

Ernesto Castaneda-Tinoco, PhD, a Sociology professor at American University whose research concerns immigrant integration and transnational family dynamics, says he’s seen the way early childhood trauma like separating from a parent — a Homeland Security practice that long precedes the Trump administration’s recent crackdown, if to a lesser extent — affects immigrant children. While many mental health concerns may not surface until later on in life, he believes the trauma begins at the initial separation.

“A lot of these youth have nightmares because they saw the border patrol agent, the judge, or the prison guard taking their parents away. They see the person they love the most being humiliated, taken away, shouted at. It can be very violent,” Castaneda tells Brit + Co.

Particularly stressful, he says, is the uncertainty and confusion brought on by the initial separation. “What’s stressful for these children is that they have no real news about their parents — there’s no certainty about when they’ll see their parents again,” he says.

And since children don’t understand the legal aspect of the separation, many assume their parents did something morally wrong, which emotionally complicates existing trauma. “It’s like a prolonged, ongoing status of grief. When a family is separated, every single day, every meal, is a reminder of what’s missing,” he says.

For children whose parents are deported, the ongoing lack of safety and security, combined with the memories of early trauma, makes it difficult to function later on in life and often leads to depression and low self-esteem.

“For a young child, the number one sense of security in a difficult situation is a parent who makes them feel safe,” Castaneda says. “If that parent is removed, it leads to depression, insecurity, and lack of self-worth.”

Because many immigrant children separated from their parents stay with legal family members stateside, they get to enjoy new opportunities and safety they may not have experienced in their countries of origin. But many of them lack the basic skills they need to do well in school or succeed in a job, largely because of the trauma they have endured in being ripped away from their primary caregivers.

“We find in our research that while these kids have more money and are eating better than they used to, these kids just aren’t as focused in school, so they’re not performing well,” he says. “Not only do they not have English skills they need to do well, but they’re distracted because they are undergoing all this stress in their homes.”

Though some research links early stress and trauma to increased risk of crime later in life, Castaneda says this appears to be less common among immigrant youth.

“What we see most is that many of these children are very resilient and adaptable,” he says. “They don’t often run into trouble with the police or abuse substances — most of them are actually pretty law abiding. They’re usually very careful about not calling any attention to themselves, especially if they experience fear of deportation.”

Rather than act out, many immigrant youth face low self-esteem and depression, which Castaneda says can lead to lack of motivation or drive — many drop out of high school and never attend college, which keeps them in low-class jobs — and even self-harm.

“There’s a message coming from society that these children aren’t valuable, so these youth feel like they’re nobodies, that they don’t deserve anything,” he says.

In some cases, children are reunited with their families, whether they move back home or their parents are able to immigrate. But even then, the grief of separation has left its mark. Castaneda says that by the time families are back together, parents have often remarried or had other children, which compounds the trauma children experienced when they were separated from their families.

“These families thought everything would be fine once they were back together, but they still have to deal with this trauma and the feelings of abandonment and separation,” he says.