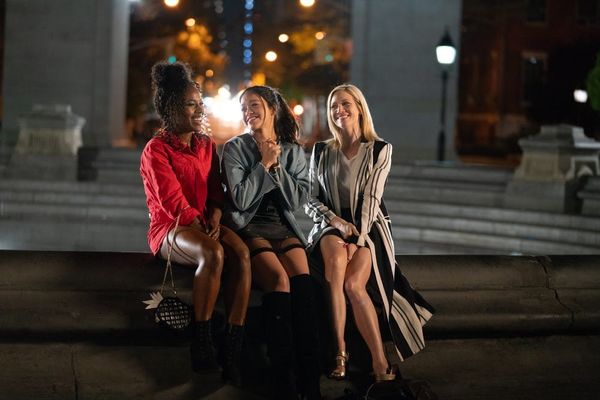 Welcome to Brit + Co’s Weekly Entertainment Planner! Each Monday, we highlight one thing we’re excited about in six categories — movies, TV, music, streaming services, podcasts, and a bonus pick from all of the above — to help you navigate your week in watching and listening. Check out our picks for the week of April 15 to 21 below. Your eyes and your ears will thank us!

Penguins (April 19): Disney’s latest nature feature takes a lighthearted approach, detailing the life of an Adélie penguin named Steve who is on a mission to find his life partner. It’s soundtracked with fun, poppy fare, and narrated by Ed Helms, who does a charming job of taking on Steve’s character while also providing plenty of educational information. Check it out in theaters starting Friday, April 19. (Photo via Walt Disney Studios)

Bless This Mess (April 16): Lake Bell and Dax Shepard star as newlyweds who uproot their chaotic lives in New York City to start over on a farm in rural Nebraska. But with a crumbling house and relatives who aren’t quite long-distance enough, they quickly realize that starting over isn’t exactly the clean slate they hoped it would be. Watch the premiere on Tuesday, April 16, at 9:30pm ET/PT on ABC. (Photo via ABC/John Fleenor)

Someone Great (April 19): Gina Rodriguez stars in this girls’ night flick as Jenny, a fledgling music journalist whose long-term, serious relationship ends when she decides to move across the country for her dream job. Heartbroken, she turns to her two best friends, Erin (DeWanda Wise) and Blair (Brittany Snow), for “one last epic day” in NYC. Check it out when it arrives on Netflix on Friday, April 19. (Photo via Sarah Shatz/Netflix)

Bodies: Women often struggle to have their health issues taken seriously. Bodies, a podcast series from host Allison Behringer, tackles the medical mysteries women confront — from anxiety to menopause to problems with breastfeeding and more — with the detail they deserve. Listen to all six episodes online, or wherever you get your audio content.

BTS feat. Halsey, “Boy With Luv” (April 12): If you haven’t already fallen for Korean pop phenoms BTS, their new single with Halsey might just be your ticket in. The pop banger is poised to make a strong play for the song of the summer, and given that their new album Map of the Soul: Persona also features an Ed Sheeran collaboration, we’re gonna go ahead and bet that you’ll hear more from the septet than ever before in the coming months. Listen to “Boy With Luv” right here. (Photo via Jon Kopaloff/Getty Images)

No Good Nick (April 15): If you find yourself waiting (im)patiently for the fifth and final season of Fuller House to drop on Netflix, No Good Nick could be the perfect feel-good placeholder. Melissa Joan Hart and Sean Astin star as the Thompsons, whose lives are changed when a teen girl claiming to be a distant relative, Nick, appears on their doorstep needing a place to stay. Nick’s story isn’t exactly the truth, though, and the Thompsons have to work to find out her real motives. No Good Nick arrives on Netflix on Monday, April 15. (Photo via Lara Solanki/Netflix)