While the Internet Was Celebrating Alexandria Ocasio-Cortez’s Dance Moves, She Voted Against a Key Campaign Promise 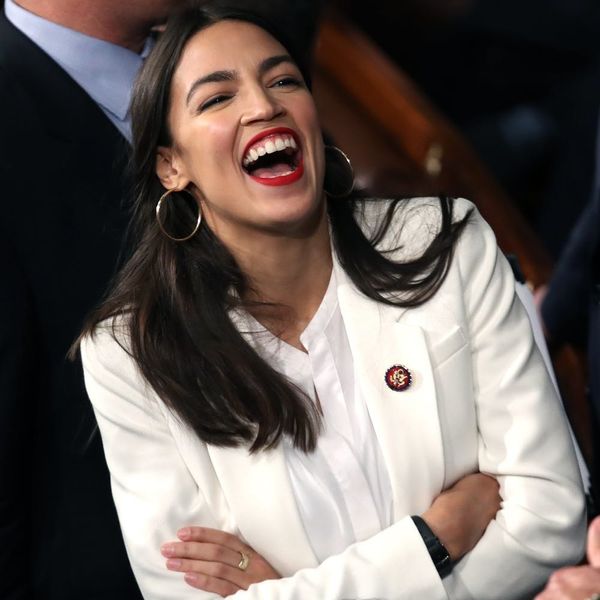 The internet was alight on Friday over yet another viral Alexandria Ocasio-Cortez moment, this time in the form of leaked footage of her dancing while she was in college at her alma mater, Boston University. The video was posted by an anonymous Twitter account, whose account name is taken from a far-right conspiracy theory called “Q Anon.” The account’s ostensible aim was to make Ocasio-Cortez (or “AOC” as she’s popularly known online) look bad on the day she was sworn in, but her online fans loved the video and turned it into an internet phenomenon over the weekend. Ocasio-Cortez herself even responded by tweeting a new video of herself dancing outside her new office on Capitol Hill.

Unfortunately, while everyone was celebrating Ocasio-Cortez cutting footloose in college and clapping back at her trolls, the newly sworn-in representative from New York was breaking from one of her signature campaign promises of abolishing ICE.

I hear the GOP thinks women dancing are scandalous.

Wait till they find out Congresswomen dance too! 💃🏽

Have a great weekend everyone :) pic.twitter.com/9y6ALOw4F6

“Abolish ICE” moved from an immigrant rights position to a progressive Democratic campaign slogan in the lead-up to the midterm elections and amid massive public outcry over the Trump administration’s “zero tolerance” policy at the southern border.

Ocasio-Cortez, who identifies as a Democratic Socialist and was endorsed by the Democratic Socialists of America, was one of the first Democratic candidates to sign on to demands for “abolishing ICE.” This could be taken as a call to do away with border controls altogether, but that’s far from the case. In ICE’s place, Ocasio-Cortez has advocated for returning to a system that more closely resembles the agency that predates ICE, the Immigration and Naturalization Service. In any respect, it’s striking that one of the first actions Ocasio-Cortez took as a member of Congress was to vote in support of funding the Department of Homeland Security, which includes ICE, through February 8 — even if the measure was to ensure government employees are paid during budget negotiations amid the ongoing government shutdown.

Ocasio-Cortez and most Democrats voted in favor of this resolution, which did not include funding for Trump’s southern border wall, and the president stated he would not sign on to the resolution because it lacks border funding. But Ocasio-Cortez’s vote is still a significant departure from her explicitly anti-ICE campaign messaging.

Ocasio-Cortez potentially surprised her supporters on more than one occasion with her first votes as a Congressperson. After her swearing-in, she voted in favor of Nancy Pelosi — who Ocasio-Cortez protested alongside youth environmental activists just a few weeks ago — as Speaker of the House. Pelosi is a favorite among moderately liberal Democrats, but her past leadership and policies have been a far cry from the progressive promises Ocasio-Cortez made during her campaign.

News of these votes, which are likely a disappointment of sorts to the progressives who brought Ocasio-Cortez to victory, barely seemed to make a ripple amid the non-controversy of the college-era dancing video.

It’s no surprise that AOC’s supporters, who are understandably protective given the onslaught of preposterous attacks the right is constantly leveraging at her, would come out in droves to correctly declare that it’s fine and good to goof around in college, as Ocasio-Cortez did in the leaked video. It also makes sense and is laudable for Ocasio-Cortez to laugh off these attacks online and to stick up for herself in the face of such ridiculous criticism.

But the policies Ocasio-Cortez supports still matter, especially when those policies betray the progressive ideals that her supporters believe in. If Ocasio-Cortez promised to overhaul ICE, the last thing she should be doing on her first days in office is putting her support behind funding for the DHS — even as a short-term measure. Her supporters should be able to hold her accountable for votes that go against major campaign promises, even if they enjoy joking around in celebration of her online amid illegitimate right-wing concern trolling.

Elizabeth King
Elizabeth King is a politics, history, and culture writer based in the Twin Cities. She is generally pretty cranky but still enjoys traveling, music from the early 2000's, and plotting the resistance. Feel free to say hi on Twitter at @ekingc or check out some of her work at www.elizabethcking.com.
Brit + Co Community Voices
Politics
Brit + Co Community Voices Politics
More From Politics