Who Really Invented the Açaí Bowl? 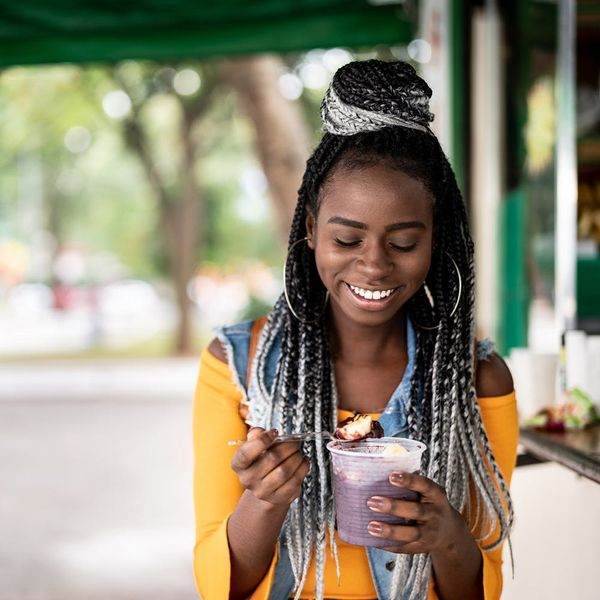 You may crave a good açaí bowl in the morning, but have you ever stopped to think of where the smoothie dish featuring that hard-to-pronounce produce came from? The tropical fruit has become so ubiquitous that it’s now a $5 soft serve at Costco, and yet many don’t know what açaí berry looks like. Even though açaí bowls are a fairly new food trend, açaí (pronounced ah-sigh-ee) itself has been eaten for thousands of years.

Açaí berries have been a staple food of the people living in the Amazon River delta for millennia, but it wasn’t until the early 1970s, when people began migrating from to the cities of Macapá and Belém in the north, that they began to gain popularity outside of their original growing area.

These small berries grow on palm trees in the Amazon River delta. At first glance, açaí berries don’t seem edible. They’re small, hard, and have a very large pit compared to the amount of fruit that’s actually on the berries. In order to be eaten, they have to be soaked in water until they soften. Then, the fruit pulp has to be removed from the pit, traditionally done by rubbing the berries until it comes off. Today, the fruit is shipped to processing centers that complete this task mechanically. The pulp then has to be eaten, frozen, or dried into a powder within 24 hours, as it tends to spoil quickly. This is why most Americans have only seen the frozen variety.

Açaí isn’t sweet. It has an earthy flavor and creamy texture (due to its high fat content), and traditionally it’s eaten along with fish and cassava root as a main dish. So how did açaí go from savory staple to smoothie bowl base? There’s one family that paved the way…

WHERE THE Açaí SMOOTHIE BOWL COMES FROM

The Gracie family, famous for their Brazilian jiujitsu gyms, invented the açaí bowl in the late 1980s, and it grew exponentially in popularity throughout the decade and into the ’90s during a fitness boom in the country. Originally from the Amazon River delta area, the Gracie family included açaí as part of the “Gracie Diet.” They liked the fruit because it was low in sugar, full of vitamins and antioxidants, and thought to boost energy. However, they had to come up with a way to mask the fruit’s earthy, sometimes dirt-like flavor.

Because it has to be shipped frozen, the açaí became a smoothie base. The Gracies would blend the frozen pulp with sweet fruits like banana and sometimes guarana, a sweet native berry to Brazil, to create a refreshing, energizing meal not unlike soft-serve (or the smoothie bowls we enjoy today). Açaí attracted other athletes, and now, there are açaí bars all over Brazil where you can stop in and get a bowl of the frozen açaí mixture topped with all kinds of fruits, granola, and nuts.

It wasn’t until the early 2000s that açaí was brought to the US. Brothers Ryan and Jeremy Black and their friend Edmund Nichols went to Brazil and tried the fruit for the first time. They loved açaí bowls so much that by the end of their trip, they were committed to introducing them to the US. They started the company Sambazon, the first to import frozen açaí pulp to the US. They started selling the frozen purée door-to-door at juice bars around Los Angeles and Southern California, then traveled to Miami and New York City. The fruit took off, and now you can find açaí bowls at dedicated cafes, smoothie shops, and juice bars around the country. Or, if you’re feeling really ambitious, you can always try making your own açaí bowls at home.

Learn more about the secret history of your favorite foods by following us on Pinterest.

Justina Huddleston
Justina Huddleston is a food writer living in Los Angeles. When she's not busy writing, she spends her time in the kitchen creating both virtuous and decidedly junky vegan food. Buffalo chickpea pizza, anyone? She's also been known to eat a plain block of tofu or beans straight out of the can for lunch, but somehow those culinary adventures don't make it to her Instagram. You can follow Justina on Twitter or see what's cooking in her kitchen on her blog, A Life of Little Pleasures.
Brit + Co FOMO-Free Guide to Summer
Healthy Eating
Brit + Co FOMO-Free Guide to Summer Healthy Living
The Conversation