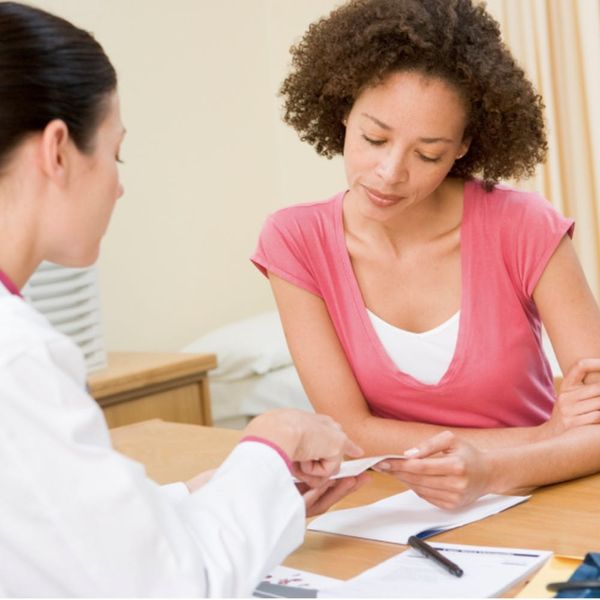 A lot of people feel stressed out or nervous when going to the doctor, but for some of us, that stress is way worse. According to a new survey from NPR, the Robert Wood Johnson Foundation, and the Harvard T.H. Chan School of Public Health, 18 percent of LGBTQ+ Americans avoid the doctor out of fear they will be discriminated against.

This number is even higher for LGBTQ+ people who are baby boomers and older. A 2010 report from the American Society on Aging found that more than 50 percent of LGBTQ+ baby boomers fear their doctors will not respect them because of their orientation or gender identity. Higher numbers of trans people also report avoiding medical care because of discrimination. According to the National Women’s Law Center, almost 30 percent of trans people report delaying or avoiding care because of discrimination or disrespect, and more than 30 percent delayed or avoided preventative medical care.

Janaya, a 23-year-old queer woman from Illinois, tells Brit + Co that she’s experienced a lot of fear over going to the doctor because of her sexual orientation. Both of her parents are healthcare providers, she says, but neither gave her sufficient information about things like sexual health.

“I [was] upset that I didn’t have the information I needed even though my parents were in health care and should have been able to provide me with that,” Janaya tells us. She explains that she had to jump through some extra hoops in order to get the care she really needs. With the help of her brother, Janaya found a new primary doctor who specializes in women’s health, but even so, she had to fill some information gaps for her doctor.

Her new doctor is friendly, but Janaya still ended up playing educator to her doctor. Even though her new doctor is a specialist in women’s care, “the onus definitely was on me to educate her about what ‘queer’ means and what being in an open relationship means for me,” Janaya says. “It was a lot of pressure, and being an educator definitely added a lot of stress.” Worries about this type of experience had prevented Janaya from getting the care she needed right away, even though she eventually did get help.

Lack of respectful and quality treatment from health care professionals and the anxiety this causes LGBTQ+ patients can have major implications for the health of LGBTQ+ individuals. A 2015 study out of the University of Washington and University of Wisconsin-Madison found that physicians have biases in favor of patients who share their sexual orientation, which can lead to compromised care for queer people.

According to a study press release, the study’s authors concluded that, “For healthcare organizations that aim to serve these populations, these data suggest an opportunity to examine methods likely to mitigate implicit biases, such as eliminating discretion from decision-making, use of clinical guidelines, awareness of personal bias as self-caution, organizational policies that promote objective decision-making, and inclusion of counter-stereotypical experiences in educational programs.”

Some physicians acknowledge the biases in their field, and advocate for more and better training for doctors on LGBTQ-specific issues. The American Medical Association has a few recommendations for physicians to ensure that they treat LGBTQ+ patients with dignity and respect, and take their medical concerns as seriously as straight and/ or cis patients. The AMA says that doctors should include visual cues that their office is open and welcoming to LGBTQ+ patients, such as displaying a non-discrimination statement or posters from LGBTQ+ organizations. The organization also says that doctors should customize patient intake forms to make sure they’re inclusive of multiple genders and orientations, and seeking out advice on how to make LGBTQ+ patients feel comfortable and respected.

Dr. Joshua Coren, a professor of family medicine at Rowan University, offered more specific suggestions in 2015. Coren’s advice includes not assuming that a patient is heterosexual, understanding that homophobia is the real problem and not sexual orientation, and dealing with any homophobia and heterosexism.

LGBTQ+ people face discrimination and biases in most sectors of their lives, and doctors’ offices hold significant weight because patients’ health can be compromised. Queer patients like Janaya should not have to educate their doctors about LGBTQ+ basics, which means doctors need to step up. If doctors, especially straight doctors, take the time to educate themselves on LGBTQ+ issues and ensure they’re offering the best possible care to all patients, it will be easier for LGBTQ+ people to get the care they need and deserve.

Elizabeth King
Elizabeth King is a politics, history, and culture writer based in the Twin Cities. She is generally pretty cranky but still enjoys traveling, music from the early 2000's, and plotting the resistance. Feel free to say hi on Twitter at @ekingc or check out some of her work at www.elizabethcking.com.
LGBTQ
Gender Issues
LGBTQ Womens Health
More From Gender Issues