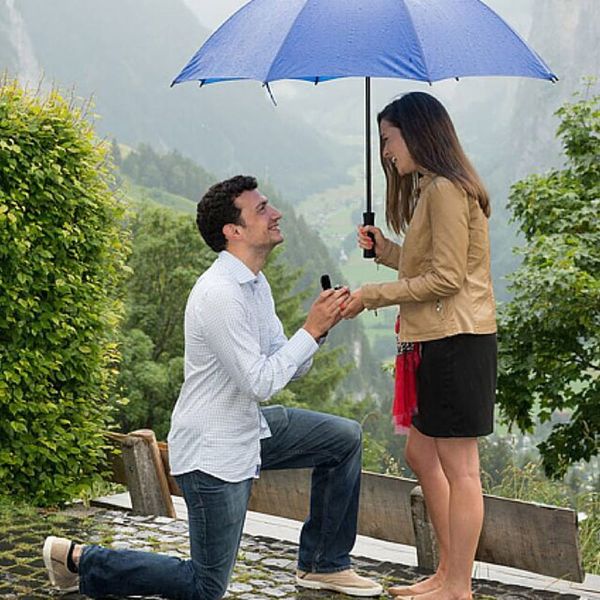 You’ve said yes to your man and now you’re rocking a gorgeous engagement ring, but before you throw yourself into wedding planning, you have to answer one very important question: When do you say “I do?” Sure, some couples plan a wedding in three months, while others run away to become life partners in days, but for some, it takes a little more time to walk down the aisle. We caught up with five couples who were engaged for more than two years to learn why they put extra time between fiancé and spouse.

We Waited to Enjoy the Moment

Kaitlin Bauchmoyer and Alex Ditty met while they were sophomores in college. After five years together, they got engaged during a whirlwind European vacation. Kaitlin says, “I was studying abroad in Germany, and the day before I was set to come home, Alex showed up at my host family’s door to tell me the trip wasn’t over yet. We got engaged in July 2014 on a mountain in a small town near the Interlaken in Switzerland and spent the next few days traveling through Switzerland, Paris and London.”

The two will be married August 6, 2016, after a more than two-year engagement. “We wanted to enjoy being engaged and didn’t want to feel pressured to make on-the-spot decisions. Our friends and family are constantly asking questions about our next plans, and we just didn’t see the point in rushing it, because a long engagement was way less stressful. After all, we have our whole lives to be married!” When Kaitlin and Alex are married in August, they will have been together for seven years: “It’s really cool to stop and appreciate that fact that we really do have our whole lives together.”

We Waited to Focus on Our Careers

Anna and Jon Callender have a history fit for a fairy tale. Their first date happened in high school, and it only took one year for Jon to put a ring on it. However, the wedding didn’t take place for another five years after the initial yes. According to Anna, “We decided to wait to get married mainly because I was still in high school at the time, and I wanted to begin college. We both also felt it would be good for him to be in his career for a few years before we got married.”

Sixteen years later, these two are parents to two boys and as in love as they were at 16 years old. “Be each other’s best friend. Talk, laugh and remember to have fun with each other. Work, kids and life can sometimes have you forget why you got together in the first place. Go on dates, be silly, snuggle and enjoy each other’s company.”

We Waited for Family (and Football)

For Kerry and Matt Herchik, their two-year engagement came down to logistics. “We went to the same high school, but didn’t start dating until our senior year of college. We did not hang out in the same crowd or go to the same parties, but when we got to college, we lived in the same dorm and had a few mutual friends. Honestly, we have so much in common and realized pretty quickly that we were so much more than friends. We got engaged in May 2012 while we were on a trip to England.”

Kerry always dreamed of a June wedding, but with Kerry’s brother in the Navy and out of the country in June 2013, their ideal date was ruled out. “We dabbled with the idea of August, but we were getting into college football season, and if anyone knows Matt, they know that wasn’t going to fly. So we decided to move it to June 2014.” It couldn’t have worked out any better: “We got our choice of any venue we wanted. Everyone was able to plan for it in advance… we got to celebrate our engagement multiple times and just enjoy the fun parts of planning a wedding without being stressed all the time.”

We Waited to Find the Right Time

A twenty-seven-month engagement might seem daunting to some, but for Michelle Haun and Matt Scheer, it’s proving to be the perfect timeline. These two college friends-turned-fiancés were engaged in May 2015 after three years of dating and an intimate proposal at their shared apartment filled with flowers, love notes and a GoPro to capture the entire thing.

For these two, a long engagement wasn’t something they were necessarily going after. According to Michelle, “We didn’t really choose a long engagement, it just kind of ended up that way. I’ve always envisioned myself being more stable in my career when I got married and that won’t be happening for a few more months. Plus, we want to get married sometime in the fall, and getting married fall 2016 just seemed too rushed and would have caused us unnecessary stress.” The couple decided to get married in fall of 2017.

We Waited So We Wouldn’t Rush

For Zach and Kelli Collins, it was love at first sight… kind of. The couple met at a party in college, and after some smooth moves from Zach to snag her number, the two connected the way any twenty-something did in the early 2000s: over Facebook and AOL. It took a few killer dance moves on Zach’s part to win Kelli over, but after six years of dating, these two were engaged in July 2013.

Their slightly over-two-year engagement gave the couple their pick of vendors and time to figure out what they really wanted in their wedding. According to the couple, “We chose a long engagement because we wanted to make sure we had everything planned perfectly and we weren’t rushed to making decisions. Plus, we wanted a fall wedding, so we had to plan around the Ohio State football schedule.” Their advice for couples in the planning process? “It’s never too early to start booking your vendors. Also, find out what is important to you — whether it’s a photographer, venue or band — and spend your money there.”

Are you and your better half having a long engagement? Tweet us why at @BritandCo!

Kelsey Nelson
Kelsey Nelson is a born-and-raised Ohioan living life in South Carolina. She thrives at binge watching Netflix, contemplating what to order at the bar and running any trail or road she can get her feet on. In addition to being a Brit + Co contributor, she writes about southern pleasantries, DIY mishaps and more at North Living South. If she isn’t writing or running, she’s off adventuring with her husband Brad and their Lab/Dachshund mix, Gordy.
Celebrity Couples
Relationships
Celebrity Couples Engagement marriage Wedding Planning
More From Relationships