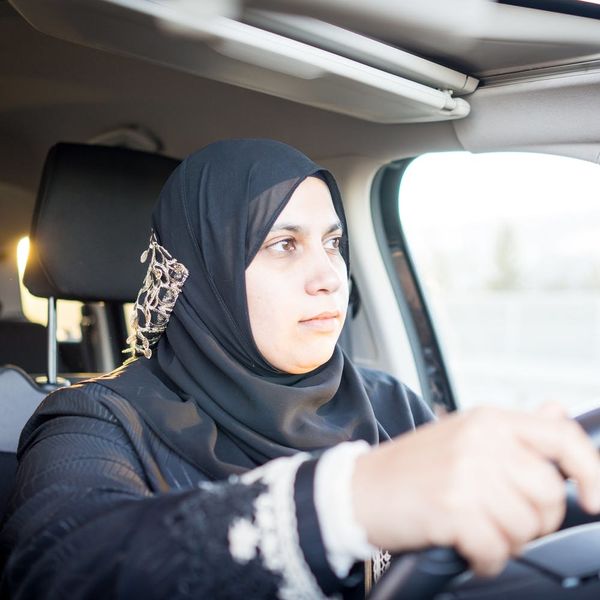 For over half a century, women in Saudi Arabia have been banned from driving and getting a drivers license — that is, until now. As of June 24, the government has lifted the ban on women’s driver’s licenses in what has been heralded as a groundbreaking victory for Saudi women. For a brave cohort of Saudi women’s rights activists, however, the newfound ability to drive is a mixed blessing.

The government of Saudi Arabia has said it expects an influx of women on the roads in the coming weeks. Yet, even though women are legally being allowed to obtain a driver’s license, the country’s “guardianship system” over women remains in place. This means that women will need to get permission from a male relative — typically a husband or father — in order to get a driver’s license in the first place. For activists, that technicality is the biggest problem of all.

Samah, a Saudi women’s rights activist who has asylum in the US, tells Brit + Co, “The main thing that we wanted to end is the male guardianship system. We were clear and loud about it.”

Speaking out anonymously is an unfortunately necessary layer of protection for these women. Alarmingly, the Saudi government has been jailing women’s rights activists, even as it touts the lifted ban on women’s driver’s licenses as a win for Saudi women. The BBC notes that while a handful of women received licenses in early June ahead of the official ban lift, police have been steadily arresting women’s rights activists. At least some of the arrested activists had advocated for women’s right to drive.

In May, Saudi authorities arrested and detained at least 11 women’s rights activists and accused them of major crimes, including “suspicious contact with foreign parties,” according to Human Rights Watch. Other reports say 17 activists were arrested in total and that some, but not all, have been temporarily released. It’s still not clear who, if anyone, has been formally charged with the crimes the government is accusing them of.

“It was very horrifying when we heard the news. It was unexpected,” Samah tells us of the arrests. “The new prince was promising that he would be supportive of women and make women more independent. And then all the sudden these activists are in prison.”

Samah adds that the jailed activists have been accused of working with foreign organizations, acts the government claims are a threat to the nation. If working with foreign organizations is a crime, Samah says, “I should be in prison right now just for talking about my struggle and just for talking about what I want for Saudi Arabia.”

Human Rights Watch reports that state media labeled the women “traitors” for their activism. This rhetoric runs counter to the positions the crown prince of Saudi Arabia, Mohammad bin Salman, publically touts to leaders of other countries.

The Middle East director at Human Rights Watch, Sarah Leah Whitson, pointed out the hypocrisy of jailing the activists: “The crown prince, who has styled himself as a reformer with Western allies and investors, should be thanking the activists for their contributions to the Saudi women’s rights movement,” Whiston said.

“Instead,” Whiston added, “the Saudi authorities appear to be punishing these women’s rights champions for promoting a goal bin Salman alleges to support – ending discrimination against women.”

While the prince is selling the lifted ban as a wholesale win for women’s rights, it’s clear that the government is still continuing to severely limit women’s autonomy. Some women may be allowed to drive, but this simply isn’t enough for activists who want more for themselves and other Saudi women. Though the ban has been lifted, the fight for women’s rights is far from over — and activists are ready to bring it on.

Elizabeth King
Elizabeth King is a politics, history, and culture writer based in the Twin Cities. She is generally pretty cranky but still enjoys traveling, music from the early 2000's, and plotting the resistance. Feel free to say hi on Twitter at @ekingc or check out some of her work at www.elizabethcking.com.
Activism
Current Events
Activism Feminism Politics
More From Current Events