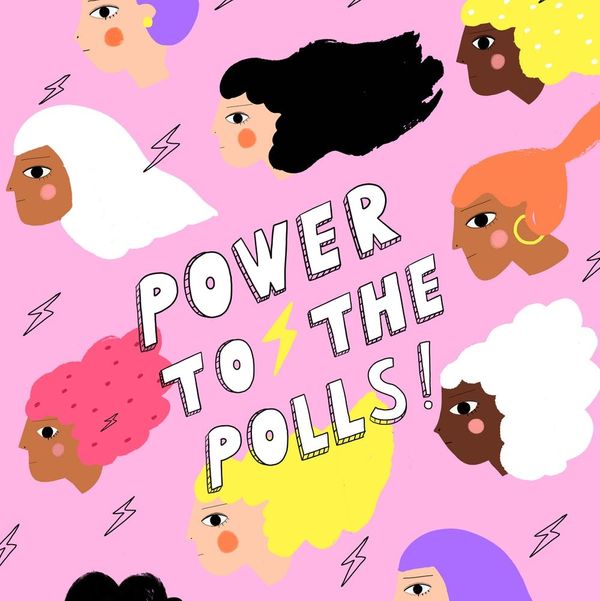 Women’s March Inc., the group behind two years of massive, nationwide anti-Trump demonstrations and women-centric political mobilizing, has this year fixed its eyes beyond rallies and toward the midterm elections. Launching a campaign dubbed Power to the Polls, the Women’s March is getting creative with how it’s working to register potential voters.

Amid various second-annual Women’s March events this year, activists and political candidates gathered in Las Vegas for the official kick-off, Power to the Polls. The Women’s March has also partnered with the social justice-oriented design lab Amplifier to inspire people to register to vote in this year’s midterms.

the power to the polls campaign

Power to the Polls is a nationwide voter registration tour aimed at registering Democrats and progressives to vote in the midterm elections this fall. Women’s March Inc. hopes to register one million voters, and their campaign will also promote candidates that align with the organization’s values. According to the Power to the Polls website, the ultimate goal of the campaign is to “create transformative social and political change.”

The campaign can be seen as part of a broader push to flip Congress to a Democratic majority in the wake of Trump’s election. For example, NBC reports that thousands of young people registered to vote at the March For Our Lives demonstrations that followed the February school shooting in Parkland, Florida.

harnessing the power of art

Leading up to the first Women’s March on January 21, 2017, Amplifier solicited designs that were later printed and used as protest signs at the march. Many of these images quickly became iconic and emblematic of the current progressive women’s movement.

Later, Women’s March Inc. partnered with Amplifier again to solicit a vast amount of public art that would inspire people in swing states to register and vote. A team that included the Women’s March board of directors selected 50 pieces of art from 3,000 submissions. In the spirit of the Women’s March, all of the art was created by women or gender nonconforming people.

In various locations around the country, activists can pick up posters featuring the artwork for free. Anyone who wants a poster but doesn’t live near a pick-up spot can print the art themselves and display them around their city. The art will also be featured in a traveling exhibition accompanying the Power to the Polls tour.

the results so far

At the campaign kickoff in Las Vegas this past January, organizers said that 10,000 people registered to vote. By the end of the tour later this year, the campaign will have made stops in a total of 10 states, including North Carolina, California, Michigan, and Florida. But with the help of the new artwork, the message will likely spread much farther and wider.

Elizabeth King
Elizabeth King is a politics, history, and culture writer based in the Twin Cities. She is generally pretty cranky but still enjoys traveling, music from the early 2000's, and plotting the resistance. Feel free to say hi on Twitter at @ekingc or check out some of her work at www.elizabethcking.com.
Creativity
Empowerment
Creativity Politics