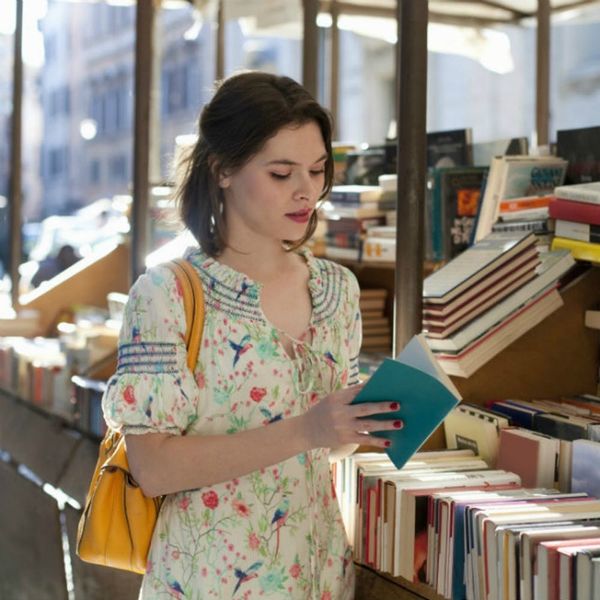 Before we can truly enjoy all the perks that come with spring (like hosting many trendy outdoor soirees), we’re going to have to endure a little bit of April rain. Thankfully, we’re planning ahead this year and organizing a TON of things to do when we’re stuck inside our apartments on a rainy day — including catching up on all the best new young adult books. So,*before* we all get stuck in a rainstorm, we’re highlighting nine new YA reads being released this April. Go ahead, and start adding them to your Amazon cart PRONTO.

From the same author who created Simon vs. the Homo Sapiens Agenda, this new novel is an LGBT love story that every kiddo and adult should read immediately. It follows the lives of two twin girls as they discover the joys and perils of first relationships while also trying to manage the complexities of adolescence. #ThrowbackThursday, anyone?

There’s a war of independence going on between Earth and its former colony Genesis, and Noemi Vidal has sworn to protect her home at all costs. Forced by chance to team up with Abel, a robot in Earth’s mech army, this exciting adventure will take the unlikely pair on a journey through the entire galaxy… and it’ll make them question everything they’ve been taught along the way.

Merging one of the most popular fairy tales of all time with an ode to geek culture, this epic story is just the lighthearted book you need to truly unwind on a rainy April evening. From the Magic Pumpkin food truck to a Cosplay Ball, fandoms of all kinds will swoon for this romantic remake.

If you’ve ever wanted to know more about Vincent and Theo van Gogh, this book is a must read. Drawing on the 658 letters that Vincent wrote to Theo during his lifetime, this tale of brotherly love is definitely on our to-read list.

The author of The Sisterhood of the Traveling Pants series is back again with a new book that’s tackling family dynamics in a big way. Although Sasha and Ray share three sisters, a summer job, and their family summer beach cottage, they’ve actually never met… that is, until this summer.

Math genius Eva Walker has a secret that’s making her an outcast at school: Whenever she touches another person, she sees a vision of their emotions. Even though she has taken a vow to avoid everyone for her own protection, she can’t help but be drawn to the new kid whose jacket gives off so much emotional trauma that she *literally* falls to the floor.

If you love Jane Austen and Downton Abbey, you’ll definitely want to pick up a copy of this #girlboss book ASAP. Lydia is following her late father’s wishes and has plans to marry a respectable suitor. But her world, including her plan to get hitched, comes crashing down when she and her law clerk Robert are kidnapped by someone after her family fortune.

Both Melanie and Damon have lost people they love. But instead of succumbing to the underbelly of grief, they make an effort to fill the emptiness that each of their departed loved ones has left by joining the school’s production of Othello. Sonia Belasco’s newest work is a touching tale of how art can speak to even the gloomiest of souls and how life moves forward even in the wake of incredible tragedy.

In this story set in 1777 Albany, New York, Melissa de la Cruz recounts the epic romance between high-spirited and distinguished Elizabeth Schuyler and a once-orphaned Alexander Hamilton, who is changing the world as General George Washington’s right-hand man.
Ashley Macey
Ashley Macey is a lifestyle freelance writer who loves all things fitness, wellness, and creativity. When she's not exploring her home in the Pacific Northwest with her dog Max, you'll probably find her curled up with a good book and some hot tea. Follow her daily jaunts on Twitter.
Book Club
Home News
Book Club Books