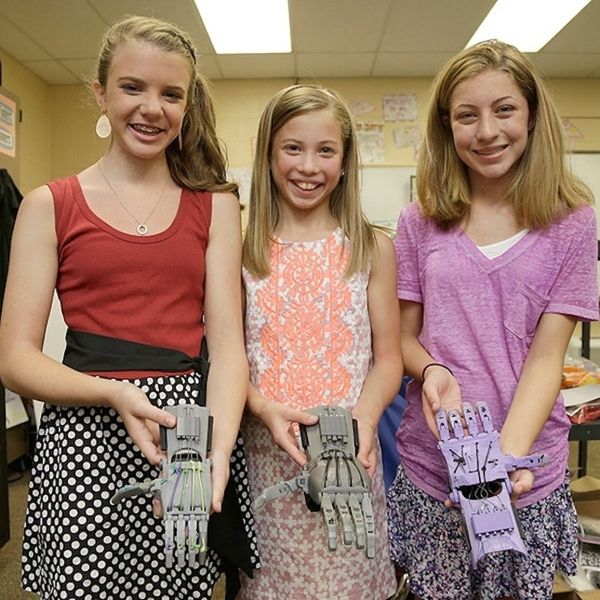 Online platforms make it easier than ever to anonymously share opinions. And as anyone who has ever perused the YouTube comment section knows, they aren’t always the kindest. But one recent comment thread is making a case for the positive. As a result, kids born without limbs are now receiving 3D printed ones for free. For LIFE.

Every year in the US alone, roughly 1,000 babies are born with missing limbs. Because prosthetics cost thousands of dollars and are quickly outgrown, it’s nearly impossible for most families to afford them throughout a child’s formative years. But these days, kids can get them without so much as a dime spent, thanks to girl and boy scout troops, youth groups, schools, maker spaces and private homes who have taken up the call to make them with 3D printers.

The movement, led by a group called e-NABLE, got started thanks to a Rochester Institute of Technology professor named Jon Schull. After watching a YouTube video about an engineer who had partnered with a costume designer to make a DIY robotic hand after losing fingers in an accident, Schull saw that the duo made the designs available online. After noticing a few YouTube commenters mentioning their willingness to bring those designs to life on their own, he issued a simple challenge via YouTube, asking them to respond to the inquiries of folks, specifically children, who could really use the results of their labor.

“YouTube video comments are typically the most demoralizing literary genre in the history of mankind,” Schull says. “In this case, there were a number of people who said, ‘This is really great, what this guy is doing, and I would do that.’ So, I called their bluff.” As a result, 3D-printed limbs have since been given away in 37 countries, and e-NABLE recently received a $600,000 grant from Google to continue its efforts. It plans to give away 6,000 more prosthetics in the next two years.

One of e-NABLE’s recipients, Lusie (the cute kiddo in the video), has big plans. When asked by a .Mic reporter what she’d like to be able to do with her robotic hand in the future, she has a twofold response: “A cartwheel. And I want one that shoots out candy.”

If you’ve got a 3D printer at home and want to put it to good use for a kid in need of a literal helping hand, check out e-NABLE’s website to get started.

What other problems could crowdsourced 3D printing solve? Share your ideas in the comments section!

(Photo via e-NABLE, video via .Mic)

Amy Lynch
Amy is a freelance writer and editor, telling the stories of progressive people and projects that move the world forward. Her work has appeared on The Hairpin, Refinery29, Citygram and more, and she's developed content for the likes of Alternative Apparel, Milkshake and Silvercar. She lives, works and plays with her fiancé and their dog, Bogey, in the weird, wild heart of Austin, Texas.
3D printing
Health
3D printing YouTube
More From Health