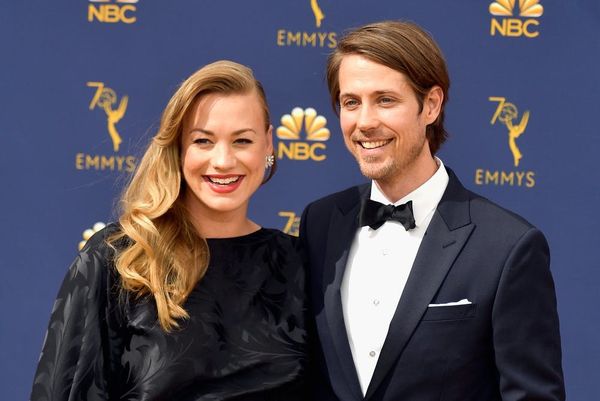 Yvonne Strahovski is a proud new mom! The Handmaid’s Tale star revealed in an emotional Instagram post that she and husband Tim Loden recently welcomed their first child, a baby boy.

“My heart has melted into a billion pieces a thousand times already,” Strahovski captioned a sweet black-and-white photo of herself and her new infant son. “We have been blessed with the greatest joy of our lives, our baby boy. Welcome to the world Peanut, your parents love you beyond measure and you are already my little dream boat. My heart has been stolen!”

The actress — who plays Commander Fred’s wife Serena Joy on Hulu’s The Handmaid’s Tale — first revealed she was expecting back in May, excitedly saying in an Instagram post that it was “so very exciting to watch and feel this little Peanut growing every day.”

At the 2018 Emmys, where Strahovski was nominated for a Best Supporting Actress award, she accidentally revealed to E!’s Giuliana Rancic that she was expecting a boy. “I’m just gonna hold him in there and hope for the best,” she said, before realizing her slip.

Strahovski and Loden, a photographer, have been together for seven years and secretly wed in the summer of 2017, news that the actress shared at the 2017 Emmys. “We ended up jumping in the lake in our suit and gown, just to cool down,” she told E! News at the time. “It was ridiculously hot. But we had a great time.”

Do you have a nickname like “Peanut”? Let us know @BritandCo!