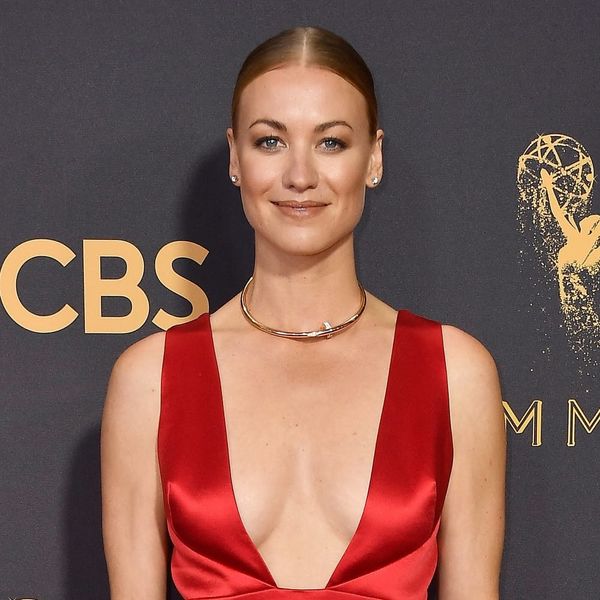 It’s an exciting time for the stars of The Handmaid’s Tale. Not only did the series have a stellar showing at the 2017 Emmys last night — it nabbed eight awards, including Outstanding Drama Series and Outstanding Lead Actress in a Drama Series for Elisabeth Moss — but cast member Yvonne Strahovski also just revealed that she secretly married her longtime love over the summer.

The 35-year-old Australian actress — whom you may recognize as Commander Fred’s wife, Serena Joy, from the hit Hulu series (as well as Sarah Walker from Chuck and Hannah McKay from Dexter) — tied the knot with actor and producer Tim Loden a few months ago at a wedding in Northern California.

“We ended up jumping in the lake in our suit and gown, just to cool down,” the 35-year-old actress told E! News on the Emmys red carpet on Sunday. “It was ridiculously hot. But we had a great time.”

Very happy to share with you all that The #HandmaidsTale premieres April 26, only on @hulu 🙌

Her new hubby, who accompanied her to the Emmys, agreed that their wedding was a memorable event, saying simply, “We all made it through and did some dancing. It was fantastic.”

The newlyweds, who have been together for more than six years, certainly have a lot to celebrate these days, what with their marriage and Strahovski’s Handmaid’s Tale success.

Which Emmys couple was your favorite at this year’s ceremony? Let us know @BritandCo!

Desiree O
Desirée O is a ‘Professional Bohemian’ who loves anything and everything related to the arts, entertainment, and pop culture. She ADORES being a ‘Newsy’ for Brit + Co, covering all of the latest tidbits of awesomeness that you want to read about. When she’s not writing, she’s either making messy art, going on long adventurous walks with her camera, or poking around over at bohemianizm (http://www.bohemianizm.com/). You can find out about Desirée O and her work at http://DesireeO.com/ or follow her on Twitter @DesireeO.
Celebrity Couples
Celebrity News
Celebrity Couples Emmys
More From Celebrity News