12 Books to Sneak Under the Tree This Holiday Season 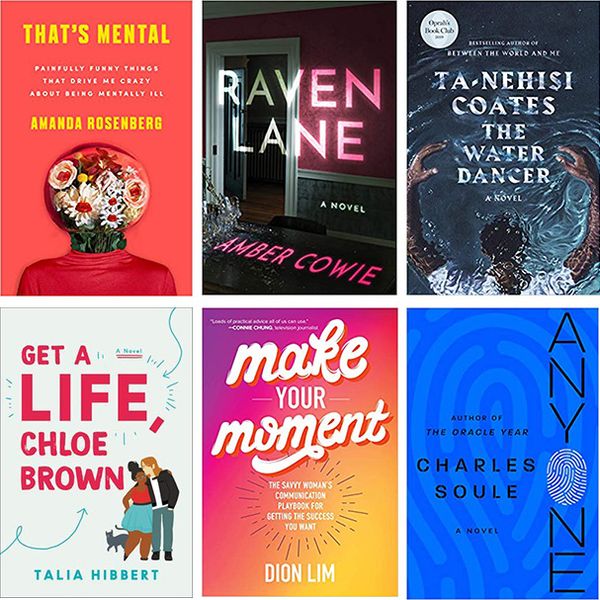 Sometimes there's nothing better than being gifted a great new book, perfect for diving in during holiday breaks and travel. If you're planning to give the gift of reading this holiday season (hello mom and dad), we've rounded up books for all of the people on your list, from the suspense fan to the sci-fi one and more.

1. For suspense junkies: Raven Lane by Amber Cowie ($25): Esme and her partner Benedict live a charmed life in their friendly neighborhood. But all of that changes when an accident occurs, a neighbor dies and Benedict is arrested. With a slew of contradicting eyewitness accounts and secrets flying around, Esme must find a way to keep her head above water and keep her own life-threatening secrets at bay. This new release is a fantastic read for those who loved Big Little Lies.

2. For historical fiction fans: The Water Dancer by Ta-Nehisi Coates ($28): Both a New York Times bestseller and an Oprah Book Club pick, The Water Dancer tells a great story of redemption and hope. Born into slavery and separated from his mother, Hiram Walker always dreamed of freedom. When he discovers that he has seemingly magical powers, he escapes his captors and heads North to find true freedom. Through many unexpected adventures and difficult situations, Hiram vows to one day return to the South and rescue the loved ones he left behind.

3. For memoir lovers: Suspended Sentence: A Memoir by Janice Morgan ($17): College professor and single mom Janice Morgan had her entire world turned upside down when she learned her son, Dylan, had been arrested for drug charges and possession of a firearm. Luckily for Dylan he is given a second chance to turn his life around. Now assigned to help him get his life back on track, Janice must learn how to help him through a turbulent process of recovery and rehabilitation. This book tells an important story about mental illness, addiction and family that memoir lovers may find extremely powerful.

4. For the hopeless romantic: Get A Life, Chloe Brown by Talia Hibberts ($16): Chloe Brown has always been overly logical. After going through a near-death experience, she realizes she has missed out on some of the most amazing parts of life and enlists the help of bad boy Redford Morgan to help her tackle a checklist of new life experiences. Together, Chloe and Red embark on an adventure of a lifetime and through their time together, they come to learn that maybe there's a shot at love for both of them at the end of it all.

5. For true story fans: That's Mental: Painfully Funny Things About Being Mentally Ill by Amanda Rosenberg ($17): Amanda Rosenberg is no stranger to dealing with the struggles that come with being mentally ill. Doing her best to live with bipolar II, she documents all of the things that drive her crazy about the diagnosis in That's Mental. With humor and sincerity, Rosenberg breaks down the misconceptions that surround mental illness and other elements that are often overlooked. Taking into account her own experiences, this nonfiction book illuminates an illness that affects millions every day and offers insight into how you can best help those around you who are struggling.

6. For the fantasy reader: The Starless Sea by Erin Morgenstern ($29): When Zachary Ezra Rawlins discovers a book lost in the stacks of his university library, he becomes slowly entranced with the hundreds of stories that fill the book's pages. After realizing that some of the stories were exact retellings of moments in his life, he decides to uncover the truth about the book's unique power. A series of magical clues reveal themselves to Zachary and he begins to fall deeper and deeper into the world that the book has created for him. The Starless Sea is a novel that will capture your attention from beginning to end.

7. For self-help fans: Make Your Moment: The Savvy Woman's Communication Playbook for Getting the Success You Want by Dion Lim ($26): Dion Lim's life has always been a whirlwind—her career as a successful ABC News anchor made sure of that. In this new nonfiction read full of workplace anecdotes, she provides helpful advice for every young business woman looking to create a name for herself. Make Your Moment is an inspirational testament to women who take control of their lives and go after their dreams no matter the obstacles that get in the way.

8. For your mom or sister: Becoming: A Guided Journal for Discovering Your Voice by Michelle Obama ($20): Michelle Obama revealed in her memoir Becoming that there is much more to her story than becoming the first African American first lady. This guided journal is a wonderful companion for MO fans to channel their thoughts and ideas in a productive and creative way. Full of intriguing writing-prompts, the journal is the perfect gift for anyone who enjoys practicing self-care and goal-setting for the new year.

9. For the young readers in your life: The Rubicus Prophecy by Alane Adams ($13): It is her second year at the Tarkana Witch Academy and young witch Abigail is struggling to focus on her studies. Not only is the entire school whispering about the cryptic Rubicus Prophecy, but Abigail has a big mystery to solve when a warship lands near the school. With the help of her friends and a little magic, Abigail must journey down to the Tarkana catacombs to discover the truth about the Rubicus Prophecy, once and for all.

10. For dad: Once More To The Rodeo: A Memoir by Calvin Hennick ($17): This memoir by Calvin Hennick tells the story of Hennick's struggle with self-doubt about his past, when raising his bi-racial son. By writing a point-by-point retelling of a road trip he and his son took to visit the rodeo, Hennick crafts a story full of important advice and lessons. At each stop, Hennick has something new to learn and something new to teach his son and by the end he hopes to accept that his past does not have to affect his present, or his son's future.

11. For fans of family sagas: Revelation by Bobi Gentry Goodwin ($17): Angela Lovelace is a hard-as-nails social worker and has never seen anything that she couldn't deal with. But when she glimpses her father's photograph on the wall of a now motherless boy's apartment, her entire world falls to pieces. As she investigates the case, the perfect family she had always thought she had starts to fall apart, revealing that everything is not what it seems. Revelation tells the story of a woman who must learn that everyone has flaws, even those closest to her.

12. For sci-fi fans: Anyone by Charles Soule ($22): When a scientist testing a cure for Alzheimer's accidentally finds herself having been teleported into her husband's body, she realizes she has created something that will change the world. Years later, this "flash" technology has been regulated for the consumer market, but while most people obtain it legally, others begin to participate in black market "flash" technology trades. Through its dark and thrilling story, Anyone calls to attention the important ethical questions that arise with the invention of new technology.