Black Reigned Supreme Once More at the 2018 BAFTA Awards: See All the Best Looks! 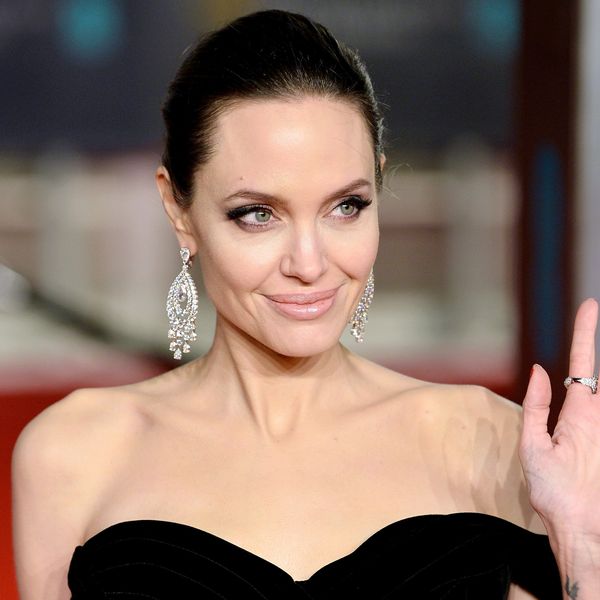 The momentum for Hollywood’s TIME’S UP movement isn’t slowing down anytime soon! That was the message stars sent tonight at the 2018 British Academy Film Awards (BAFTAs), where celeb after celeb showed up in all black, just as they did at the 2018 Golden Globes. Everyone from Angelina Jolie to Jennifer Lawrence donned the hue in support of women's equality and those suffering at the hands of sexual abuse: Scroll through to see all the most out of this world looks!
Kate Middleton: The British royal caused a stir by opting for hunter green over black in a cap-sleeve Jenny Packham design with emerald jewels and black Prada pumps. (Photo via Chris Jackson/WPA-Pool/Getty)
Angelina Jolie: Jolie went for classic Angie in a black velvet look from Ralph & Russo that featured her signature thigh-slit and a one-shouldered sweetheart neckline. (Photo via Jeff Spicer/Getty)
Jennifer Lawrence: The Dior spokeswoman stuck with her brand in a romantic style from the designer’s spring 2018 show that featured a boxy neck, full skirt, and elegant white chiffon sleeves. (Photo via Jeff Spicer/Getty)
Lupita Nyong’O: Leave it to Black Panther star Nyong’O to make black exciting — her Elie Saab Couture gown was a feast for the eyes thanks to its structural waist and gold piping. She topped things off with Giuseppe Zanotti shoes and Gemfield jewels. (Photo via Neil Mockford/FilmMagic/Getty)
Margot Robbie: Robbie’s Givenchy ensemble was anything but boring, thanks to an asymmetrical side cutout at the waist and arm and a flowing skirt with silver detailing. She paired the look with a Roger Vivier bag and Harry Winston rocks. (Photo via Jeff Spicer/Getty)
Saoirse Ronan: 23-year-old Ronan was a vision in a Chanel pre-fall getup with a feathered hemline and a sheer bottom. (Photo via Jeff Spicer/Getty)
Allison Janney: Janney looked out of this world — literally — in a sleek black Bibhu Mohapatra dress with a space-agey silver neckpiece that extended down her arms plus a bit of Messika bling to boot. (Photo via Mike Marsland/WireImage/Getty
Octavia Spencer: Spencer was far from somber despite her all-black ensemble in a glitzy Sachin & Bibi frock with Chopard bling and a megawatt grin. (Photo via Jeff Spicer/Getty)
Leslie Bibb: Bibb punched up her otherwise black ensemble with some colorful blue sequin stripes, courtesy of dress designer Yanina Couture. (Photo via Jeff Spicer/Getty)
Rachel Weisz: The Favorite star took it back to basics in this simple-yet-stunning shiny black dress and Harry Winston accessories. (Photo via Jeff Spicer/Getty)
Salma Hayek Pinault: Hayek Pinault kept it simple and chic in a covered-up black Gucci gown with sequined rose and bow embellishments at the waist, neckline, and sleeves. (Photo via Jeff Spicer/Getty)
Kate Mara: My Days of Mercy star Mara’s black Christian Dior dress added some oomph in the form of a gold webbed gilded pattern. (Photo via Neil Mockford/FilmMagic/Getty)
Emma Roberts: The Betches executive producer and niece of Julia Roberts was a pretty woman, indeed, in a Schiaparelli Haute Couture gown and Jennifer Meyer baubles. (Photo via Mike Marsland/WireImage/Getty)

Which gorgeous look do you love the most? Cast your vote over @BritandCo.

Which gorgeous look do you love the most? Cast your vote over @BritandCo.

Nicole Briese
Nicole is the weekend editor for Brit + Co who loves bringing you all the latest buzz. When she's not busy typing away into the wee hours, you can usually find her canoodling with her fur babies, rooting around in a bookstore, or rocking out at a concert of some sort (Guns N' Roses forever!). Check out all her latest musings and past work at nicolebjean.com.
Awards Shows
Red Carpet
Awards Shows Celebrities Celebrity Style Kate Middleton Red Carpet Style