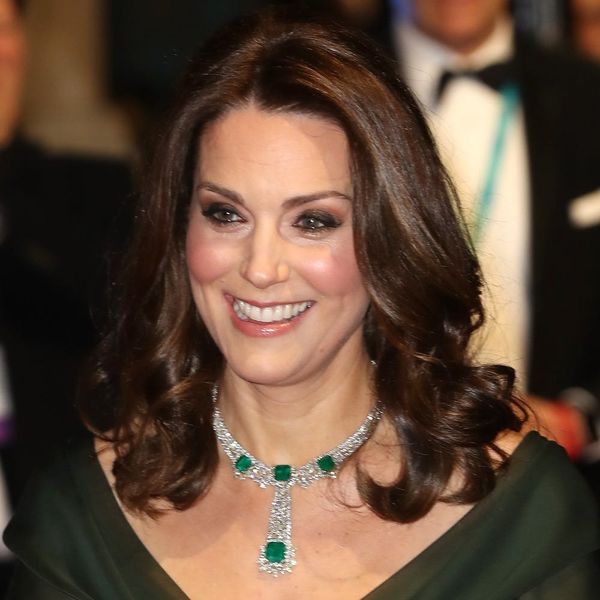 When it comes to style, Kate Middleton can typically do no wrong (that ethereal capelet frock, though!). Unlike most of her impeccably chic ensembles, however, which are typically celebrated for their glam factor, the gown she chose to wear on the 2018 BAFTA Awards red carpet is making headlines for a different reason entirely.

As we saw at the American Golden Globes, stars at the British BAFTA Awards (the country’s Oscars equivalent) were reportedly encouraged to don black in a show of solidarity for survivors of sexual assault and the TIME’S UP movement that’s been sweeping Hollywood.

Many, including Lupita Nyong’O, Jennifer Lawrence, Angelina Jolie, Margot Robbie, and Saoirse Ronan (to name a few), followed suit, but the Duchess of Cambridge stood out from the pack in a hunter green cap-sleeve gown by Jenny Packham.

The soon-to-be mother of three’s gown did include a slim black velvet sash, which she accessorized with black clutch, and black Prada pumps, and plenty of emerald jewels.

While many were quick to criticize the 36-year-old’s look, others pointed out that wearing all black would be breaking royal protocol on not one, but several counts.

For one thing, as we learned when Meghan Markle showed up to her first engagement of 2018 in an all-black ensemble, the color is one the royal family usually reserves for very somber events, such as a funeral. “Royalty almost never wears black, except for somber occasions, so today’s look was a surprise for royal watchers…. The no-black rule is followed by every major royal woman around the world,” Christine Rossi told E! at the time.

Still, it didn’t stop Middleton from wearing black to last year’s BAFTA Awards, which she attended in an off-the-shoulder floral-printed piece from Alexander McQueen, making the second point far more likely to have influenced her decision. Royals, in an effort to remain strictly neutral with regard to politics, even forging their right to vote, aren’t privy to make political statements with their wardrobe.

As many outlets have pointed out, however, she has shown her support of women’s issues in many other ways, visiting women’s prisons to speak with those struggling with mental health and addiction issues and speaking candidly about the struggles even she herself has faced as a mother for educational film series Best Beginnings.

Do you think Kate should have worn black to the awards show? Sound off over @BritandCo.

Nicole Briese
Nicole is the weekend editor for Brit + Co who loves bringing you all the latest buzz. When she's not busy typing away into the wee hours, you can usually find her canoodling with her fur babies, rooting around in a bookstore, or rocking out at a concert of some sort (Guns N' Roses forever!). Check out all her latest musings and past work at nicolebjean.com.
Awards Shows
Red Carpet
Awards Shows Controversy Kate Middleton Red Carpet Royal Family
More From Red Carpet