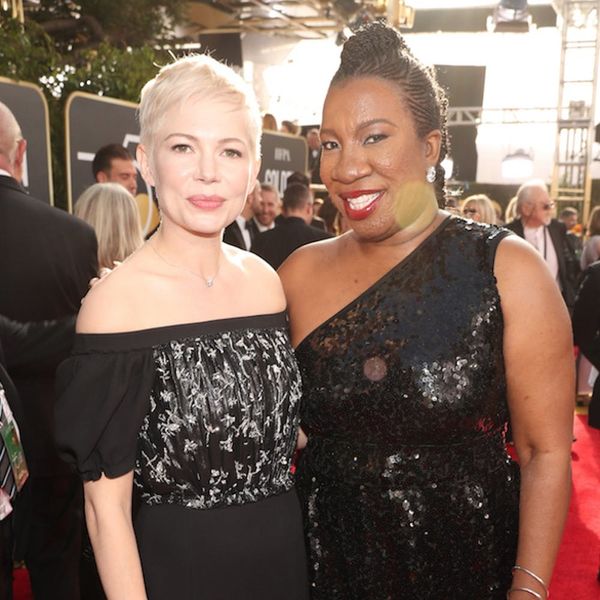 Which look is your fave of the night? Sound off over @BritandCo.

Which look is your fave of the night? Sound off over @BritandCo.

Nicole Briese
Nicole is the weekend editor for Brit + Co who loves bringing you all the latest buzz. When she's not busy typing away into the wee hours, you can usually find her canoodling with her fur babies, rooting around in a bookstore, or rocking out at a concert of some sort (Guns N' Roses forever!). Check out all her latest musings and past work at nicolebjean.com.
Celebrity Style
Celeb Style
Celebrity Style Golden Globes Red Carpet
More From Celeb Style

Sometimes you need to pivot from your original direction and use your creative energy to stay the course or find another path. We're partnering with Office Depot to spotlight emerging entrepreneurs from our Selfmade virtual business course. Maisa Mumtaz-Cassidy, founder of sustainable fashion marketplace Wear Consciously, shares how she learned to adapt to change while staying true to her mission.

B + C: What inspired you to start Consciously?

I'm from Bangladesh, which is the world's second-largest garment exporter, where most fast-fashion brands manufacture. Several, if not majority, of my friends and family own garment businesses and my whole life I've heard of the challenges factory owners face to meet the ever-growing demands on Western brands that come into the country to leverage cheap labor and lax policies. I've also worked in the manufacturing industry back in Bangladesh and that experience really showed me how apathetic businesses are towards garment workers. I would be in meetings with buyers telling them we strive to pay our workers a living wage, which is 4 times more than what they actually get paid, only to be dismissed with, "That's not our responsibility. If you won't make this product for us for $1/unit, we'll just go to the factory next door."

It was my frustrating experience in manufacturing that sparked my interest in ethical fashion, and the more I learned, the more committed I became to bringing about real, positive change within the fashion industry. I always knew I wanted to start my own business — entrepreneurship runs in my family and my mom was always very encouraging of it. I landed on the idea for Consciously around the end of 2018. By this point, I saw that there were sustainable fashion brands doing truly incredible work while creating beautiful products. I also realized that people who do want to shop ethically-made fashion have a difficult time navigating the space because it can be overwhelming to research and understand. People don't want to just buy things, they want to feel like they're contributing to a positive cause through the purchasing choices they make. Consumers are paying attention, and 70% of them want to know what the brands they support are doing to address social and environmental issues. And because sustainable fashion is so multi-faceted, I built a marketplace where consumers can shop already-vetted brands by the values most important to them!

B + C: Have you always been passionate about fashion?

I've been fascinated with fashion ever since I can remember, and I really believe fashion is a tool to express one's values. In high school, my best friend and I were planning on launching our own line and had formulated a business plan, sketched designs, and pitched our parents for funding. It's sort of funny to think back on now, but at the time, we were teenagers serious about taking the South-Asian fashion scene by storm but being the kids of over-achieving South-Asian parents, education ultimately took priority and our dreams of co-founding a fashion business eventually withered away. I did go on to study Fashion Marketing at one of the top fashion universities in the country and still will occasionally design my own clothes when I'm back home.

B + C: What startup challenges have you faced along the way?

This is a tough one because every single day entrepreneurs are faced with unique challenges. I would say one of the biggest ones has been launching a business in the midst of a global pandemic. We faced multiple delays in launching Consciously because many vendors' supply chains were shut down or operating unpredictably. And retail has been one of the most devastated industries by the coronavirus outbreak, so when we did launch, sales were trickling in quite slowly for the first couple of months which is something that we had anticipated to some degree but nonetheless, it was still a really hard and stressful time especially since we're a bootstrapped company and we had invested so much capital into inventory. As the founder of a startup with limited resources, I really have to get my hands dirty in all aspects of the business and constantly learn new skills which is always a humbling experience but compels one to intimately get to know the ins and outs of their business and I believe that's ultimately an advantage.

B + C: What strategies helped you overcome those challenges?

Leading with humanity is incredibly important to me and it's how I try to approach solving challenges in both my personal and professional life. Being resilient and adaptable has definitely helped push me through situations that once felt impossible to overcome. I think those are qualities every entrepreneur needs to adopt because running a business can take you on a hell of a psychological rollercoaster ride. When our vendors' supply chains were being impacted, I let them know we were committed to their success and would be there for them when they were ready. Empathy and clear communication played a significant role in ensuring that we launched in a way that best supported our brand partners, and even today I work closely with them on matters of all sorts.

Now that things have started reopening in the US, we're seeing our sales increase and hitting our monthly goals. I think that's primarily because we've stayed consistent throughout the past few months with our newsletter, social media, and blog to remain top of mind for our target audience. We've also made changes internally in order to be able to bring on new brands and products faster with little to no upfront costs which is huge for Consciously and really exciting for our consumers.

B + C: What are some of your successes so far?

I would say creating a really engaged community that we call our "Consciously Fam." Also building a platform that's already received such positive response and one in which people find real value in.

B + C: How have you approached marketing your brand and raising awareness?

Mostly, our focus has been on organic marketing meaning social media, email, blog, and SEO. We've recently started investing in paid social ads so we'll see how that goes. Besides that, we've done some influencer marketing in the past which we're doubling down on now.

B + C: What was your most valuable takeaway from Selfmade?

The most valuable takeaway was bringing Brit + Co co-founder, Anjelika Temple, to our Board of Advisors! I feel really grateful to have connected with and gotten support from her, Brit Morin, and my coach, Emily Merrell during Selfmade.

B + C: What's your best organizational tip? Do you use any apps that help you manage your business?

Google Calendar is my best friend. I timeblock literally everything. In regards to apps, I use Later to manage my social media accounts, Canva and Figma for designing, and Monday for project management.

B + C: How do you stay motivated? Who inspires you?

My team, mentors, and customers help me stay motivated. When people interact with Consciously and respond with, "I love this!" It's just the best feeling. Entrepreneurship can be really lonely and exhausting; when I'm feeling really overwhelmed or down, I listen to podcast interviews of female founders I admire like Deepica Mutyala, Payal Kadakia, and Jaime Schmidt for example, who are all just really authentic about their journeys and it really does uplift and inspire me. My mom also keeps me motivated because she's my number one cheerleader!

B + C: What's one piece of advice you would give to female entrepreneurs on the brink of starting?

If you're truly passionate about solving a problem and think you're the right person to take it on, just start. Things will never be perfect, you'll fail and learn and evolve; it's all part of the journey. But be ready to work really hard and get comfortable with being uncomfortable.

Learning to adapt to change is so important to getting ahead and not giving up. Along the way, Office Depot OfficeMax can help you stay organized & save time with a suite of business services to help you accomplish more - from signs, posters & banners to get your business noticed to marketing materials to help bring your brand vision to life.

Head to Office Depot's Selfmade page to check out even more amazing business resources (and discounts!) to help you accomplish more on your entrepreneurial journey. These offers are available for a limited time only, so be sure to take advantage of all this goodness while supplies last. Want to join the next Selfmade cohort? Check out all of the scholarship details right here.
fashion
Fashion
entrepreneurship ethical fashion fashion founder office depot style sustainable fashion
Fashion Most Recent Today's Must Reads Brands Office Depot® Office Max®