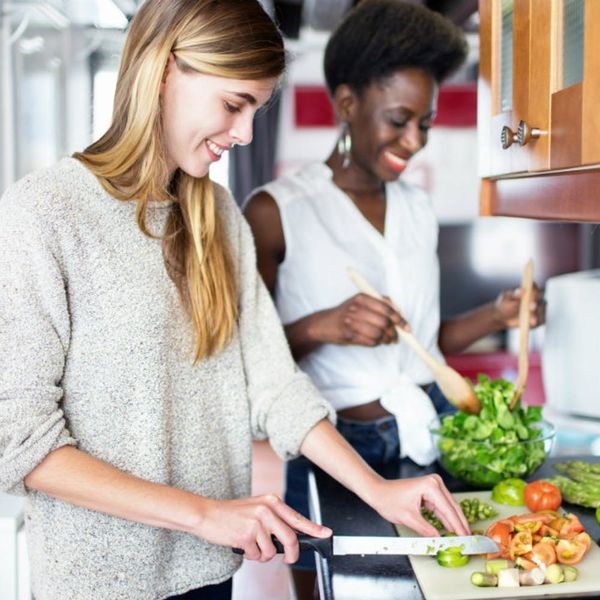 There’s a joke that you’ll know if you’ve met a vegan, because they’ll *definitely* tell you about it. That’s probably true for a few different reasons, but the main one is that it’s a pretty major life choice. Not only are you eating mostly fruits and veggies all the time, but there are a whole bunch of things you can’t eat when you go vegan (although vegan cheese is a truly amazing thing.) So why should anyone consider it? Well, turns out, it’s super good for you. The catch? It’s tough to adjust to any new eating style, especially one that cuts out two major food groups: dairy and meat. Use this expert advice to go vegan in a way that won’t drive you crazy.

1. Know your reasons. First thing’s first: To make a successful diet change, you have to be properly motivated. “There are a few reasons many people are now eating vegan,” explains Dr. Michael Greger, a physician and internationally recognized speaker on nutrition, food safety, and public health issues. “For some people, it’s health considerations and not just prevention of the leading killer diseases, such as heart disease or breast cancer, but for the immediate benefits: more energy, better sleep, better digestion, better periods, clearer skin, and better athletic performance and recovery.” We’re going to go ahead and say those are all super awesome perks.

But it’s not just your health that can improve from making this switch. The environment can also benefit in a major way. Andy Levitt, founder and CEO of Purple Carrot, a plant-based meal kit company, says that “A plant-based diet can reduce your environmental footprint. For example, by eating just one less burger per week, you can save the equivalent of 320 miles in carbon emissions and 1,850 gallons of water.” For environmentalists, going vegan is worth it for the huge positive impact on Mother Earth.

2. Be prepared for cravings and nutrition challenges. If you’re thinking about giving plant-based eating a try, it’s best to be prepared for the fact that it might not be smooth sailing in the very beginning. Giving up the non-vegan foods you love is difficult — physically and mentally. Levitt notes that “Figuring out what to make that’s both nutritious and tastes delicious can be a struggle.” Plus, some foods are harder to cut out than others. Case in point: cheese. “There are protein fragments called casomorphines (derived from the protein casein in cow’s milk) in cheese,” says Greger. “They actually act as a weak opioid in the brain. Yep, that’s right, as in casomorphines have a similar addictive effect on our brains to opioid drugs.” Pretty crazy stuff. The good news is that it’s been shown that after about three weeks of not eating cheese, you won’t crave it anymore. You can do anything for three weeks, right?

Another thing to know: You may have to to pay closer attention to your nutrition than you did before. Greger notes that because vitamin B12 is not made by plants, you have to get it elsewhere. “B12 supplements are inexpensive (pennies per dose), and you can just take a 2,500 mcg dose once per week and get all you need,” he says.

3. Set the course of your transition based on your personality. “If you know you’re an-all-or-nothing type, you might want to try taking the plunge all at once,” suggests Greger. If you’re more of the slow-and-steady person, then incorporating one vegan meal per week, then one per day, and so on, might be a better way to make the change. He also suggests that you “first find some foods that you already eat that are vegan (like pasta with marinara sauce, bean burritos, or veggie stir fry).” Next, think about foods you like that could be easily swapped for a vegan version, like chili with a veggie crumble instead of meat. Then, once you’re feeling more comfortable, look around online for some new recipes to experiment with. “A good place to start is Forks Over Knives,” says Greger.

4. Get into the right mindset. “There are over 22,000 edible plants in the world, and many of us are only able to experience a small fraction in our day-to-day lives,” says Levitt. Thinking about your options as a vegan, not your restrictions, is a way more positive and exciting perspective. “Knowing the range of opportunities of eating a plant-based meal is the first step to getting the most out of the lifestyle,” he adds.

5. Find a support system. As with any major health change, it’s a good idea to get a little help from others who know what you’re going through. “Sometimes without social support, going vegan in an animal-eating culture can be isolating,” says Greger. “That’s why I encourage new plant-eaters to find a friend, classmate, or colleague to start on this adventure together. I also recommend going to local vegan events to find new sources of inspiration and support.” These events probably have some pretty great vegan cheeses to try — just saying.

Have you ever considered becoming vegan? Did you go through with it? Tell us about your experience @BritandCo!

From Your Site Articles
Julia Malacoff
Julia is a writer, editor and proud life-long vegetarian based in Brooklyn, NY. An avid traveler, meditation enthusiast and exercise junkie, she stays active in every new locale she visits.
Healthy Living
Health
Healthy Living Vegetarian Recipes