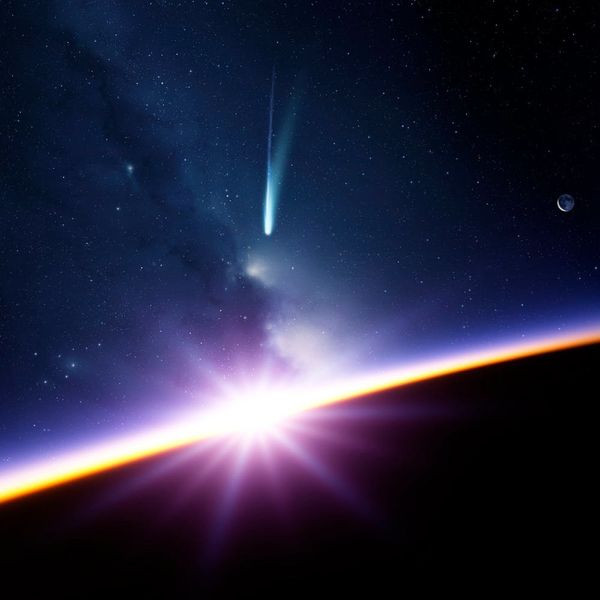 2017 is already set to be just as good if not better than this past year has been — at least when it comes to the Cosmos! We’re totally psyched for the rare total eclipse that will be visible from the US, which honestly sounds so wildly cool. But now it looks like we’ll be saying goodbye to ’16 and hello to ’17 in a super stellar way, as a comet will be flying past Earth on New Year’s Eve.

Comet 45P/Honda-Mrkos-Pajdušáková (now that’s one heck of a name!) is set to zoom by our planet just in time for December 31 and will appear somewhere near the crescent moon.

With Comet 45P passing by every 5.25 years, scientists have been able to track it quite consistently, which means we can easily predict its next visit. If skies remain clear, stargazers will be able to catch a glimpse of the comet with binoculars or a telescope, or, ya know, through the sparkling Champagne flute in your hand.

Will you be watching for the New Year’s Eve comet? Tweet us @BritandCo!

Desiree O
Desirée O is a ‘Professional Bohemian’ who loves anything and everything related to the arts, entertainment, and pop culture. She ADORES being a ‘Newsy’ for Brit + Co, covering all of the latest tidbits of awesomeness that you want to read about. When she’s not writing, she’s either making messy art, going on long adventurous walks with her camera, or poking around over at bohemianizm (http://www.bohemianizm.com/). You can find out about Desirée O and her work at http://DesireeO.com/ or follow her on Twitter @DesireeO.
new year
Celebrity News
new year