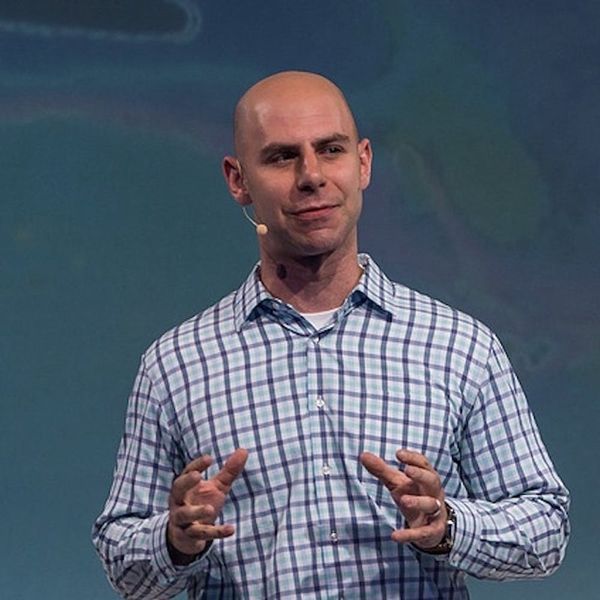 So you’re a natural-born maker. Maybe you’ve got a creative side hustle you’ve been thinking of taking to the next level. Maybe you’ve got an idea for an app no one’s thought of yet. Whatever direction your creativity takes you, Adam Grant wants to help you reach the end goal. His book, Originals: How Non-Conformists Move the World ($18), was released February 2 with a forward from his close friend and #girlboss, none other than Sheryl Sandberg. It’s chock full of practical advice and inspiring research, but with a twist: You’ve probably never thought about things the way Adam does.

“I realized we have a lot of good guidance on how to generate great ideas, but so much less on how to move them forward,” he tells us.

Originals should definitely be on any creative’s must-read list — but we chatted with Adam to get a sneak peek into his most essential tips. Scroll through for Adam’s best original advice you probably haven’t heard from anyone else.

1. Bring your idea to the right person. Adam says once you’ve developed your idea to the point where you want feedback on it, bring it to someone you know will give you some tough love. “Most of us make the mistake of going to our most agreeable friend or colleague, the really nice people, because we expect them to be supportive. And they are — they will cheer on their friend in that conversation, but they’re also really reluctant to rock the boat. And so they’re less likely to go to bat for us in other interactions, whereas a more disagreeable friend and colleague, they tend to be more critical and skeptical and challenging. They will be tougher on our ideas and they will tear them apart to try and make them better, but once they decide an idea is good, they will run through walls for us,” he says.

2. Doubt your idea, not yourself. Self-doubt can really cramp your style, but you don’t have to let it. Adam says it’s just a matter of tweaking your thinking in one key way. “There’s a lot of research showing that when you’re feeling doubt, one of the best things you can do is make sure you’re focusing on doubting your ideas and not doubting yourself. Self-doubt is paralyzing. There are moments where you say, ‘Can I do this? Am I good enough?’ You freeze when you worry about that. But doubting your ideas is energizing. When you say, ‘I’m not sure if this idea’s going to work,’ that motivates you to try more ideas, to refine the ones you have, and actually make it better,” Adam tells us.

3. Don’t feel like you need to take crazy risks. There’s this common perception that entrepreneurs and creative people love risk, but Adam says that’s not entirely true. “There’s this myth where if you want to start a business, for example, you have to quit your day job and go all in. And when you compare people who do that to more cautious entrepreneurs who say, ‘I’m going to keep working my day job and I’m going to start a business on the side as a hobby,’ that second group is 33 percent less likely to fail,” Adam says. “When you start your business as a hobby, you give yourself time to really develop the idea and get it right. If you quit your job and your entire livelihood depends on the business, you’re going to feel a lot of pressure to rush, to start making money immediately and get your products or services out there as opposed to waiting for the right time.”

4. Procrastinate. No, really. Adam once did a study where he tasked people with coming up with an original business idea. He had one group dive into the task right away, while the other played minesweeper or solitaire for a while before starting. The results were that the second group was 28 percent more creative in the ideas they came up with than the first group. “What we find is that procrastination helps with incubation, that if you charge ahead with your first idea, it’s usually the most obvious and conventional, and if you give them time to develop, you’ll come up with something more unusual,” he says. “I think the lesson here is not to leave things to the last minute, because you never actually do anything, which is not good for creativity — but rather to say, ‘There is value in delaying the start or finish of a task to make sure you let yourself get access to the widest range of ideas.’”

5. Sell your flaws. “There’s this entrepreneur named Rufus Griscom who tells you these are the three reasons you should not invest in my company… and he’s had a lot of success doing that because people hear it and they’re like, ‘Oh wow, this guy’s honest and he’s self-critical.’ And I actually just met someone this week who got her job by writing in her cover letter, ‘Here are the reasons you should not hire me.’ She sounded like she was very self-aware, and like she was willing to admit her weaknesses,” Adam says. “Ironically, it signals confidence, because when you say, ‘Here are the three reasons you should not hire me,’ if you’re willing to put those out there, it shows that you must think your strengths outweigh those weaknesses and you can overcome them.”

6. Embrace your bad ideas too. “When you look at musical composers, Bach, Beethoven and Mozart, they didn’t have a higher hit rate than their competitors — they just had more volume, and that gave them more variety and a better chance at a masterpiece. Picasso had to churn out 20,000 pieces of art in order to do a much, much smaller number of successful ones. Edison had 1,093 patents. Only six or seven of them were truly revolutionary.” In other words, create, create, create. Even if you make 99 terrible things, the 100th could be amazing.

Got an idea you want to take to the next level? Which of Adam’s tips are you most excited about? Tweet us about it at @BritandCo!

Kylie Kendall
Kylie is a freelance writer living in Ottawa, Canada. When she's not writing, you might find her scoping out all-day breakfast spots in her city or taste-testing every bottle of red wine under $10.
Entrepreneur
Home News
Entrepreneur Girlboss
More From Home News