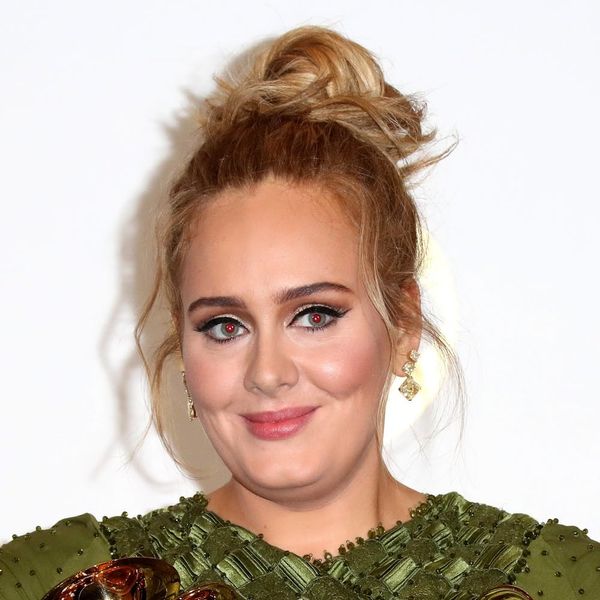 We’ve known that Adele was married for a while now: Girl kinnnnnda sorta’ spilled the beans last month at the Grammys when, during her acceptance speech, she gave a special shoutout to “her husband” before news had broke that he was, in fact, her husband. Whoopsie! *Shrugs*

While we weren’t particularly shocked — the private singer also managed to keep the deets surrounding her engagement under wraps — those with any doubt that she was, in fact, serious, just had them squashed by the songstress herself during a concert in Brisbane, Australia.

Prior to introducing the crowd-favored tune “Someone Like You,” Adele explained that she has to take herself back to the feelings she felt when she composed the song to perform it, as her current relationship status does little to help her relate. “I was trying to remember how it was I felt at the beginning of the relationship that inspired that record, because as bad as a breakup can be, as bitter and horrible and messy as it can be, that feeling when you first fall for someone is the best feeling on Earth, and I am addicted to that feeling,” she said. She then continued on to drop a bomb on her fans, saying, “Obviously I can’t go through with those feelings because I’m married now. I’ve found my next person.”

The Mirror reports that Adele has actually been a married woman for quite some time now, having tied the knot in her own LA mansion shortly after the holiday season with just a few close friends and family members (one of which is said to have been singer Robbie Williams).

An unidentified source was quoted as saying, “Adele didn’t want any fuss or to go to church. She didn’t want to deal with all the hoopla of a big [to-do] and risk people finding out.”

Instead, the paper reports that the pair exchanged simple vows, with Adele donning a traditional gown of white.

Belated or otherwise, we’re still wildly excited for the pair, who have been dating for upwards of five years. Looks like 2017 really is her year!

What do you think of Adele’s stealthy move? Share with us @BritandCo.

Nicole Briese
Nicole is the weekend editor for Brit + Co who loves bringing you all the latest buzz. When she's not busy typing away into the wee hours, you can usually find her canoodling with her fur babies, rooting around in a bookstore, or rocking out at a concert of some sort (Guns N' Roses forever!). Check out all her latest musings and past work at nicolebjean.com.
Celebrity Couples
Celebrity News
Celebrity Couples Celebrity Wedding love marriage