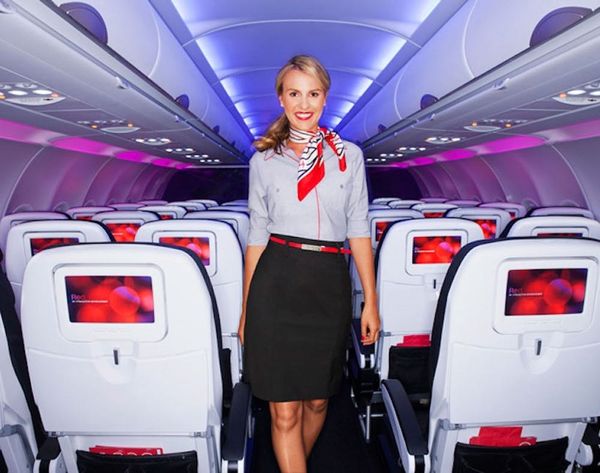 You know the story; you’ve wrestled your luggage through security, put yourself back together, grabbed a coffee and are patiently awaiting departure when… “This is an announcement for Flight 232 to Oaxaca. The flight has been delayed.” UGH. The reality is weather delays can’t really be avoided. However, punctuality is sometimes dependent on the airlines themselves: Overbooking, congested airports and scheduling snafus take away time from your trip home, your girls’ weekend, your honeymoon, your tan. Don’t take a gamble on spending more time stressing in the airport than relaxing on vacay — before booking your next trip, check out the best and worst airlines for avoiding flight delays.

2. Alaska Airlines: With an adventurous and caring spirit (plus those yummy little snack mix bags), Alaska Airlines has been moving on up over the years to place in the No. 2 spot for on-time performance. They may hit some bumps and close calls along the way, but that’s a different story.

3. Delta: Whoa, really? Yes, really! As one of America’s largest airlines (operating around 5,000 flights per day!), Delta proudly performs as a top ranking player in timeliness. Also worth noting, Delta’s complimentary Biscoff cookies tend to make up for at least minor delays.

4. Virgin America: The youngin of the group, operating for almost seven years now, Virgin is known for their innovative ways. Mood lighting, anyone?! Seriously though, their in-flight social network is pretty impressive — as is their punctuality.

5. US Airways: This may be a tricky year for US Airways since they’re joining forces with American Airlines, but let’s just say (spoiler alert) American may benefit from US Airways’ on-time track record.

The Worst Airlines for Flight Delays

1. American Eagle: This regional airline under the umbrella of American Airlines sinks to the bottom of the barrel. To justify their tardiness a tad, they do operate out of Chicago, a city susceptible to bad weather. Especially with this year’s polar vortex. Eek, remember that?!

2. ExpressJet: The world’s largest regional airline can thank American Eagle for nudging it out of last place and bumping it up a notch in the rankings. It’s important to note, when scheduling conflicts arise, regional airlines often take the backseat while larger planes take the runway.

3. Frontier Airlines: Over the years Frontier has been slipping on their promptness. Offering up a no-frills flight experience to begin with, the best thing about Frontier must be their Animal Tails.

4. JetBlue: It’s all smoke and mirrors, with the airline topping the charts in customer satisfaction yet consistently being tardy. Perhaps travelers are so satisfied with their seat-back entertainment system and blue ‘tato chips that they don’t mind taxiing on the runway for a few hours.

5. Southwest Airlines: Over the past few years, the world’s largest low-cost carrier has made a steep descent in punctuality, dragging them out of the top. Known for carrying Dr. Pepper, crews bursting out into song and being considered one of the safest airlines, Southwest keeps their customers satisfied.

Have you had good or bad experiences with the above? Share YOUR best and worst airline for getting you to your destination on time below!

Michelle Swift
Michelle Swift is a freelance writer and blogs on michelleswift.com. She has an affinity for running, culinary eats, travel and sparkly gold things. People and adventure light her up like a hot pink neon sign!
Most Recent