The 2019 Grammys' Most Memorable Moments 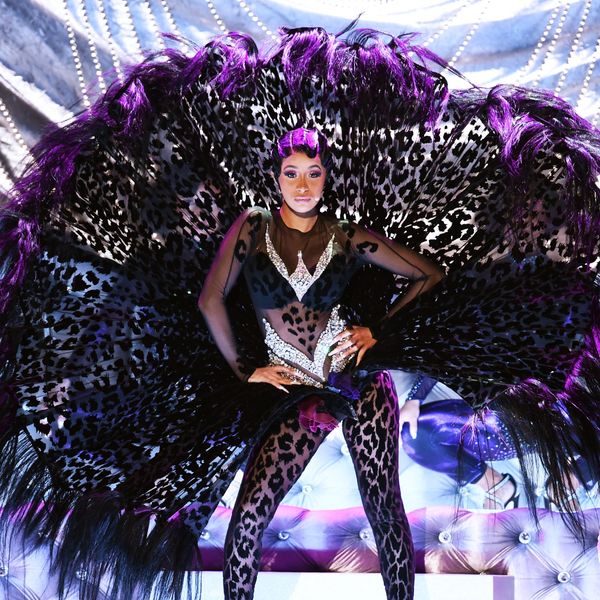 The 2019 Grammys, held at LA's Staples Center on Sunday, February 10, brought together music's biggest stars for a night of flashy performances and memorable speeches honoring the best songs, albums, and artists of the past year. If you missed the show (or just want to relive it with us), click through to see of the biggest moments of the night, from Michelle Obama's surprise appearance to Cardi B's historic win — and everything in between. (Photos via Kevin Winter/Getty Images for The Recording Academy + Emma McIntyre/Getty Images for The Recording Academy)

Camila Cabello kicked things off with a massive dance party. The Best Pop Vocal Album nominee teamed up with Ricky Martin, J Balvin, and Young Thug to open the show with a sizzling, energetic rendition of "Havana," complete with brightly colored costumes, scores of backup dancers, and a set built to look like a block party in the song's titular city. The performance also included two very special guests: Cabello's sister and dad were sitting in the background. (Photo via Kevork Djansezian/Getty Images)

Michelle Obama brought the house down. Less than 10 minutes into the show, the former first lady appeared onstage with Jada Pinkett Smith, Lady Gaga, Jennifer Lopez, and host Alicia Keys to remind fans of the importance of music. "From the Motown records I wore out on the South Side to the 'Who Run the World' songs that fueled me through this last decade, music has always helped me tell my story," Obama said, once the raucous applause and cheers had quieted. "And I know that's true for everybody here. Whether we like country or rap or rock, music helps us shares ourselves, our dignity and sorrows, our hopes and joys. It allows us to hear one another, to invite each other in. Music shows us that all of it matters. Every story within every voice, every note within every song." (Photo via Kevin Winter/Getty Images for The Recording Academy)

Dolly Parton showed everyone how it's done. Katy Perry, Kacey Musgraves, Maren Morris, Little Big Town, and Miley Cyrus joined Parton in performing some of her biggest hits, including "Here You Come Again," which the icon sang with Perry and Musgraves, and "Jolene," which she did as a duet with her goddaughter Miley Cyrus. It was the Grammys' second all-star tribute to the country icon this weekend: The Recording Academy also held a concert in her honor on Friday, February 8, to celebrate her being named the 2019 MusiCares Person of the Year. (Photo via Emma McIntyre/Getty Images for The Recording Academy)

Cardi B dominated The rapper, who was nominated for five Grammys, pulled out all the stops for her extravagant "Money" performance, which featured a lavish purple set, diamonds everywhere, and nearly two dozen backup dancers. After a stunning piano intro by Chloe Flower, Cardi appeared onstage in a glittering leopard-print catsuit and purple coat, which she eventually traded for a massive black feathered peacock tail. Because why not? (Photo via Kevin Winter/Getty Images for The Recording Academy)

Diana Ross' grandson stole the spotlight. Alicia Keys introduced the segment honoring "the rich history of [Ross'] greatest musical accomplishments," but she didn't introduce Ross herself. That honor went to the singer's nine-year-old grandson, Raif-Henok Emmanuel Kendrick, who took the stage in a dapper red velvet blazer and proceeded to steal the show (and our hearts). After opening with a joke — "Did she say 'little guy'? I'm almost 4-foot-9!" — he turned the attention to his grandmother, proudly declaring, "Young people like me can look up to her for her independence, confidence, and her willingness for her to be her unique self. She has shown the world that nothing is beyond her reach." (Photo via Emma McIntyre/Getty Images for The Recording Academy)

Diamond Diana put on a dazzling 75th birthday performance. After the intro from her grandson, Diana Ross took the stage — in a dramatic red tulle ballgown, natch — to sing a medley of some of her greatest hits, including "The Best Years of My Life" and "Reach Out and Touch (Somebody's Hand)." By the end of the celebratory set, everyone in the audience was on their feet, dancing and singing along. (Photo via Kevin Winter/Getty Images for The Recording Academy)

Alicia Keys proved she can do pretty much anything. The Grammys host decided to do something a little different for her performance and tackled a medley of songs by other artists — songs she wishes she had written herself. She started with Ragtime's "The Entertainer," playing not one but two pianos, before moving onto Roberta Flack's "Killing Me Softly," Juice World's "Lucid Dreams," and Nat King Cole's "Unforgettable." She also took on Kings of Leon's "Use Somebody," Drake's "In My Feelings," Lauryn Hill's "Doo-Wop (That Thing)," and finally, her own "Empire State of Mind." (Photo via Kevin Winter/Getty Images for The Recording Academy)

Lady Gaga turned up the intensity on "Shallow." With her A Star Is Born costar Bradley Cooper across the pond at the BAFTAs, Gaga performed a solo rendition of the film's Grammy-winning song. Ditching the softer original version of the ballad, she gave fans a passionate, dramatic interpretation that included head-banging, pyrotechnics, and a few dance moves that were reminiscent of her "Poker Face" days. (Photo via Emma McIntyre/Getty Images for The Recording Academy)

Jennifer Lopez got Twitter talking with her Motown tribute. Backed by a crew of dancers, Lopez performed snippets from a handful of Motown classics, including "Dancing in the Street," "Mr. Postman," "Money," "Do You Love Me (Now That I Can Dance)," and Jackson 5's "ABC." Smokey Robinson then joined her onstage to perform "My Girl," and Alicia Keys dropped in for "Papa Was a Rolling Stone." Ne-Yo took over for a bit, too, before Lopez finished things off with some of her signature moves. The performance was certainly flashy, but it was not received well on Twitter, where many viewers wondered why a Black artist wasn't leading the tribute. (Photo via Emma McIntyre/Getty Images for The Recording Academy)

Cardi B made history. Cardi's Invasion of Privacy was named Rap Album of the Year, making her the first-ever solo female artist to win the category. (Lauryn Hill previously won with the Fugees in 1997.) Taking the stage to accept the award, the "I Like It" rapper had to take a moment to collect herself. "I'm sorry, the nerves are so bad," she told the crowd, as she held onto Offset's hand. "Maybe I need to start smoking weed." (Photo via Kevin Winter/Getty Images for The Recording Academy)

The Grammys showed Aretha Franklin some R-E-S-P-E-C-T. Toward the end of the show, Recording Academy president Neil Portnow introduced an In Memoriam segment, which culminated in a tribute to the late, great Queen of Soul, who passed away in August 2018. Yolanda Adams, Fantasia, and Andra Day came together to perform "(You Make Me Feel Like) A Natural Woman," as images of Franklin flashed across a screen behind them, showing the icon throughout her years in the music industry. (Photo via Kevin Winter/Getty Images for The Recording Academy)

Desiree O
Desirée O is a ‘Professional Bohemian’ who loves anything and everything related to the arts, entertainment, and pop culture. She ADORES being a ‘Newsy’ for Brit + Co, covering all of the latest tidbits of awesomeness that you want to read about. When she’s not writing, she’s either making messy art, going on long adventurous walks with her camera, or poking around over at bohemianizm (http://www.bohemianizm.com/). You can find out about Desirée O and her work at http://DesireeO.com/ or follow her on Twitter @DesireeO.
Grammy Awards
Music
Grammy Awards Music Awards Shows
More From Music