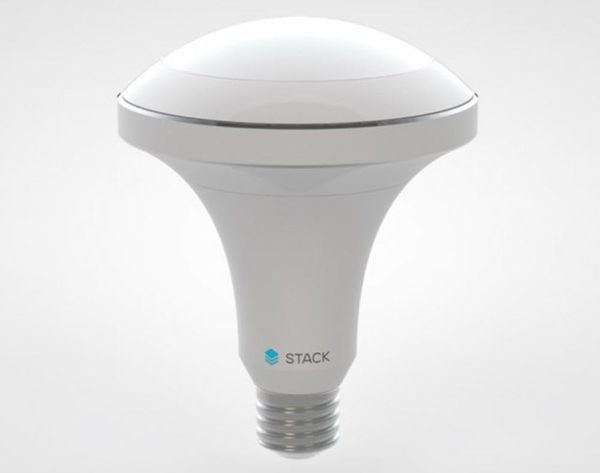 What happens when Tesla and NASA get together? Light bulbs go off, and in this case the light bulb was about a light bulb. Last year, Tesla delivery operations engineer Neil Joseph was hanging out at the office and thought, “Why are these lights on with full power when sunlight is coming through the window?” When his search for a responsive light bulb fell flat, he decided to launch a new lighting company called Stack and make a better bulb, along with cofounder Jovi Gacuson from NASA.

Alba, the first product from Stack, is a smart bulb that dims and brightens according to the natural light levels in the room, using 60-80% less energy than a regular LED bulb. Not only does it adjust to sunlight, but it learns your habits and adapts. It’s like a Nest Thermostat for lights, with state-of-the-art sensors for motion, occupancy and ambient light. Gacuson, who previously worked on sensor technology at NASA, developed an entirely new type of sensor to make sure the bulb could understand how to see-saw with natural light.

Like we mentioned, it also learns your routine at home with an algorithm, emitting blue tones in the morning to help users become alert and warmer shades of white later in the day. “If we notice that people are in a certain part of the house at certain times of day, and then they mosey on over to a bedroom, and then they spend more time awake in the bedroom before they go to bed, we can start to light a pathway,” Joseph says. You can also create profiles like “dinner party” or “nap time” or “dance party.”

We’ve seen a lot of smart tech around here, and this bulb could really be a game-changer. Like Birdi’s better smoke detector, light bulbs are something that everyone has in their home. Using Bluetooth technology, Alba has the potential to chat with other smart tech that Stack may develop later on, or that could forge partnerships with other companies. Joseph has big ideas to build healthier, more convenient homes using the data they and other smart devices collect. For example, if Alba were able to talk to a smart bed (one that tracked how you sleep — CREEPY, but cool), it would know when you’re in REM sleep and when you’re not. And it could wake you up exactly at the optimal time using light, sound, etc. — like a sleep cycle app for your whole bedroom. Not bad, Alba. Not bad.

Now, come up with your best how-many-___-does-it-take-to-screw-in-a-light-bulb joke and tell it in the comments!

Annie D'Souza
Annie is the founding father and editor-in-chief of The Midwestival and a long-time jean-on-jean enthusiast.
Smart Home
Tech
Smart Home
More From Tech