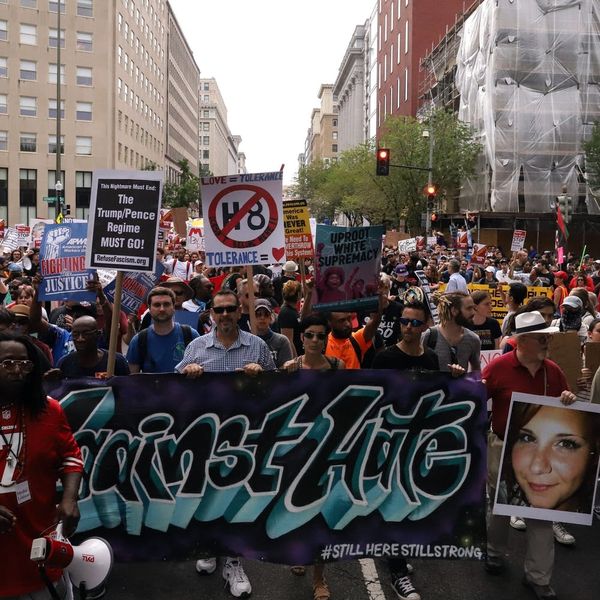 Schools in Charlottesville, Virginia closed for the second consecutive day on Friday, March 22 while police investigated threats of racial violence towards non-white students at two city high schools. The threats came less than one week after a racially-motivated attack took at least 50 lives, and wounded many others, at two New Zealand mosques. As was also the case with the New Zealand tragedy, the threats in Charlottesville had origins online.

On Wednesday, a Reddit thread began circulating with the title “the chans are at it again, please be careful.” The post — which Brit + Co has seen but will not be linking to — featured a screenshot from a separate online forum (presumably 4chan and/or 8chan, collectively dubbed ‘the chans’) which bragged of an “ethnic cleansing” planned for Charlottesville High School. The post used racist slurs to describe Black and Latino students, and advised white students to stay at home.

Police were alerted to the threat on Wednesday evening, and city preemptively closed all public schools in response, according to local newspaper The Daily Progress. A second threat, which named another local public high school, was posted to social media on Thursday.

4chan and 8chan are webforums that have become synonymous with right-wing extremism. The two sites are home to the internet’s most notorious trolls — anonymous racists, sexists, and homophobes who use the sites to fuel radicalized hatred.

While 4chan is largely associated with memes and troll accounts, 8chan — created by a frustrated 4chan user — has become what some call the most dangerous message board on the internet.

The Christchurch, New Zealand terrorist reportedly posted his Islamophobic, white supremacist manifesto to 8chan shortly before his attacks. Major broadband providers in both Australia and New Zealand have decided to block both chan sites since the massacre, but people have been speaking out against the lawlessness (and hate speech) found on these sites for years.

The webforums were also linked to the 2017 “Unite the Right” rally, in which white supremacists took to the streets of Charlottesville en masse; 19 people were injured in counter-protests, and a 32-year-old counter-protester named Heather Heyer was killed. That rally was promoted and coordinated, in part, on sites like 4chan and 8chan.

By midday Friday, Charlottesville police charged a 17-year-old student in connection with the online threats. The unnamed teen faces one felony charge of threatening to commit serious bodily harm on school property. He’s also charged with a misdemeanor count of harassment by computer.

This story is developing.

Kat Armstrong
Kat has been a writer, social media maven and mom for longer than she's willing to admit. She's also spent time in front of and behind the camera, interviewing celebs, politicians and acting as a producer for fashion and artistic photography shoots. When she isn't writing for various orgs and publications, she's hanging with her kids, husband and French Bulldog, Peter, in Toronto, Canada.
Controversy
Current Events
Controversy Social Media