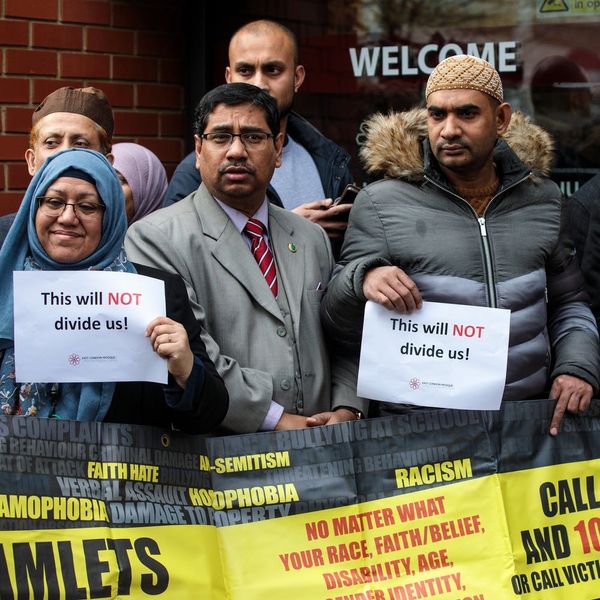 Fifty people were killed, and at least 20 others were injured, in mass shootings at two mosques in Christchurch, New Zealand, on Friday, March 15. Three people, including one man believed to be a white supremacist, have been taken into custody in the attack.

Officials say a man in his late 20s has been charged with murder. The suspect used Facebook Live’s feature to film at least part of the attack. Police also found two undetonated explosive devices in the suspected shooter’s car. They are still determining how and if the others taken into custody are connected.

An 74-page, anti-immigrant and anti-Muslim manifesto — believed to have been written by the shooter — was published to Twitter, Facebook, and the online forum 8chan (notoriously home to some of the most outspoken hate groups online) just before the shooting. The post included racist and hateful commentary against Muslim immigrants and a deep admiration for US white supremacist movements. It also included “the 14 words,” a Neo-Nazi statement of belief popularized by the far right in recent years.

The manifesto reportedly applauded the men charged in connection with other white supremacist terrorist attacks, including the Quebec, Canada, mosque shooter, Alexandre Bissonette, who was recently sentenced to at least 40 years in prison for the 2017 shooting at a Quebec City mosque that killed six and critically injured five others. Also reportedly named was Italian Neo-Nazi Luca Traini, who carried out a spree of drive-by shootings in central Italy that wounded six African immigrants.

In a press conference from the nation’s parliament at 7pm local time, New Zealand Prime Minister Jacinta Ardern condemned the hateful attack, saying of the suspects, “These are people that I would describe as having extremist views, that have absolutely no place in New Zealand and in fact have no place in the world.”

The attack, the first mass shooting in New Zealand in 22 years, has sparked sadness and fear worldwide. New York Mayor Bill de Blasio tweeted Friday morning that the city would heighten police presence around the city’s mosques in what he called “an abundance of caution.”

While there is no specific or credible threat at this time, we are increasing our NYPD presence at mosques throughout the city out of an abundance of caution. New Yorkers heading to prayer can be confident that their city will protect them. https://t.co/RGMsbXQH3p

In France, home to Europe’s largest Muslim population, interior minister Christophe Castaner ordered heightened security at all mosques, and in the UK, London mayor Sadiq Khan said there would be police stationed at the city’s mosques.

“London stands with the people of Christchurch in the face of this horrific terror attack,” said Khan, who is himself Muslim. “London will always celebrate the diversity that some seek to destroy.”

My warmest sympathy and best wishes goes out to the people of New Zealand after the horrible massacre in the Mosques. 49 innocent people have so senselessly died, with so many more seriously injured. The U.S. stands by New Zealand for anything we can do. God bless all!

“And those values, I can assure you, will not and cannot be shaken by this attack. We are a proud nation of more than 200 ethnicities, 160 languages and amongst that diversity we share common values and the one that we place the currency on right now and tonight is our compassion and the support for the community of those directly affected by this tragedy,” Ardern continued, before adding “the strongest possible condemnation of the ideology” behind the attack. “We utterly reject and condemn you.”