Amazon Is Selling an “Anorexia” Hoodie and People Are Really Upset 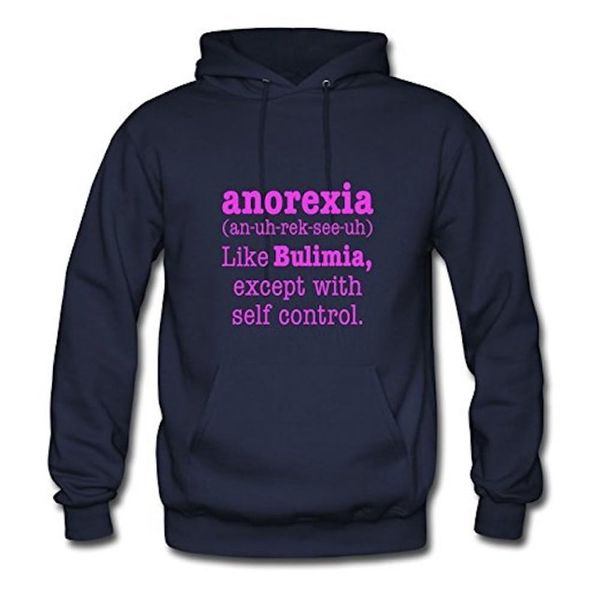 Anorexia is the third most common chronic disease among young people, after asthma and type 1 diabetes, according to the National Eating Disorders Association. And while there are efforts being made to help the issue, there is still a long way to go. So when brands offer products that are anywhere from insensitive to downright dangerous, like a sweatshirt currently being sold on Amazon, people have a strong reaction.

The Anorexia Styling Hoody for Women is available from Amazon seller ArturoBuch and features the words, “Anorexia (an-uh-rek-see-uh) Like Bulimia, except with self control.” Reviewers are outraged at the garment, which seems to encourage the eating disorder, and are taking to multiple online outlets to get Amazon’s attention. Comments on the site read, “This type of message damages the lives of the most susceptible members of our society. Making a profit by marketing eating disorders is pure evil,” and “Anorexia isn’t a choice, and it has nothing to do with self control. When you have anorexia, you have zero control.” People chimed in on Twitter, as well.

@amazon THIS IS APPALLING. It promotes anorexia and encourages sufferers to refuse treatment. Stop selling it. https://t.co/frLl7OZRsb

Not cool @amazon. As someone who stuff from both Bulimia & Anorexia this hoody is not funny or cool please remove it now https://t.co/PMYb6f00yx

.@amazon Please remove this #anorexia 'hoody' item from sale. #eatingdisorders kill. It is not a joking matter https://t.co/Cf0ZNMqT8G pic.twitter.com/CKQdDE8shg

The hoodie is still available for purchase, but hopefully Amazon will hear what people are saying and remove it as soon as possible.

What do you think about the sweatshirt? Tell us @BritandCo!

Shea Lignitz
Shea can be found in the nearest bookstore or brewery, exploring the great outdoors, or blasting Led Zeppelin. She grew up in the cold and rain of Northern California's redwoods but is currently wandering around Texas.
Style News