At Least 8 People Dead in a School Shooting in Santa Fe, Texas 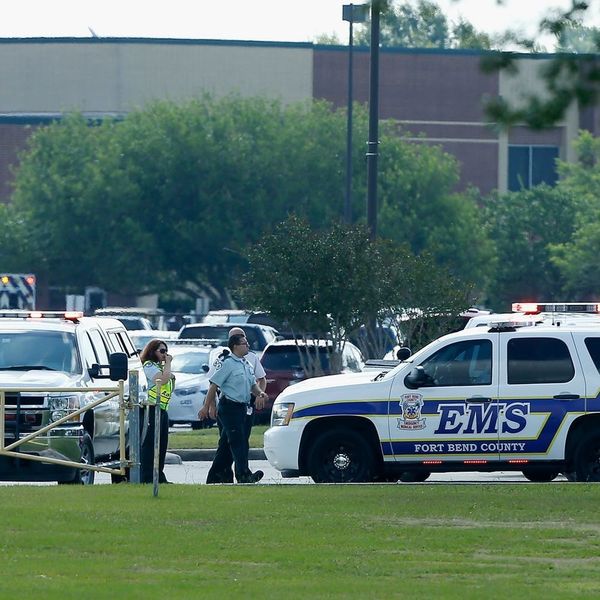 Around 7:30 am CT today, gunfire erupted inside a high school in Santa Fe, Texas, about 40 miles south of Houston. Harris County Sheriff Ed Gonzalez told reporters shortly after the incident that the majority of the dead were students. As of midday, eight have been confirmed dead, although CNN is reporting that the death toll may go up to 10.

A male student was taken into custody shortly after the shooting happened, with Sheriff Gonzalez tweeting that a second person was also detained in relation to the shooting. Authorities have also reported finding explosive devices in and around the school and surrounding area, and although they do not believe any of these devices have been triggered to go off, they have already cautioned residents to call 911 if they spot suspicious packages around the city.

According to ABC13, a local news station, witnesses say the shooting took place in an art class on campus between 7:30 and 7:45 am, with students and teachers eventually evacuated before students were reunited with their parents before noon.

The Santa Fe school shooting is the 12th school shooting to result in injury or death this year, and the third active shooter incident at a school in the US over the past eight days. Today’s death toll makes this school shooting the most deadly since the February shooting in Parkland, Florida which set off a firestorm of youthful protest against the gun lobby culminating in March’s March For Our Lives.

The student from Sante Fe High School said "I was scared not shocked. It's happening everywhere, I knew it was going to happen eventually."

If that doesn't break your heart about the state of mind of our youth in school right now then you may not have a heart.

A radio DJ from the community shared a quote from a student at the school, who told reporters shortly after being evacuated, “I was scared, not shocked. It’s happening everywhere. I knew it was going to happen eventually.”