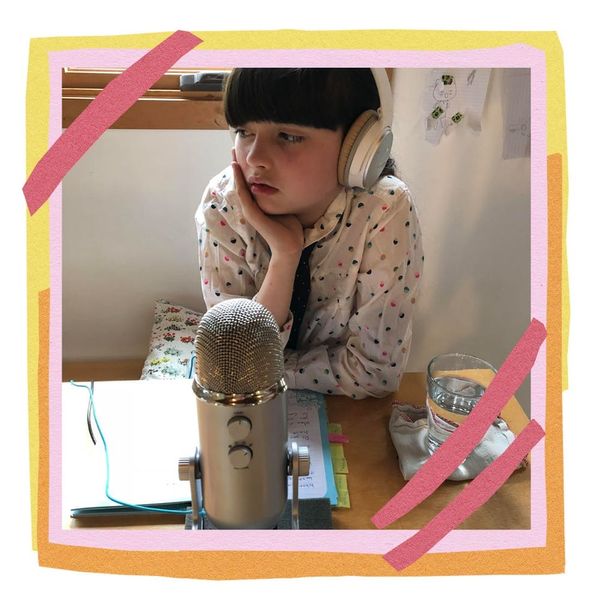 Podcast aficionados and fans of comedy may already know Bea Red Star Fletcher. The pint-sized podcaster is the host of Bea’s Big Laughs, a show where the 10-year-old interviews her comedy heroes — almost all of whom are women.

Inspired by her mother, Wendy Red Star, an outspoken indigenous artist and feminist with whom Red Star Fletcher regularly collaborates, and her father, Harrell Fletcher, an interdisciplinary artist, Red Star Fletcher uses her comedy podcast as well as her art to explore everything she loves: Aikido, horseback riding, books about girls, and fashion.

Since starting Bea’s Big Laughs at age eight, Red Star Fletcher has interviewed Carrie Brownstein, D’arcy Carden, Abbi Jacobson Fred Armisen, and “Weird” Al Yankovic, among others. Here, we talk with the comedian about collaborating with her parents, interviewing her heroes, and how she hopes to change the world.

B+C: How did your podcast Bea’s Big Laughs come to be?

Red Star Fletcher: When I was around seven years old, I became really interested in comedy and started researching it. When I was about eight years old, my dad and I came up with the idea for the podcast. Then, last year, I had my first interview with Carrie Brownstein. I try to interview all female comedians, but sometimes I will interview a male comedian just because I get the opportunity, like Fred Armisen and Weird Al Yankovic. The big idea of my podcast is that I really want to inspire other girls to make their own platform to do stuff, like have a podcast or do art or all sorts of stuff.

B+C: What do you usually do to prepare for an upcoming podcast episode?

Red Star Fletcher: I usually watch a lot of [the comedian’s] material, read their Wikipedia page, and I always have to write some questions, because if I don’t have them it’s harder to go off anywhere. I usually also do some improv stuff, but I definitely research as much as I can about them. I keep a notebook for all of my questions and try to get their autographs and pictures after each one.

B+C: What are some of your favorite interview questions that you’ve come up with?

Red Star Fletcher: Well, the most classic question that I’ve used is definitely, “What’s your favorite flavor of gelato?” I think it’s a nice way to lighten up the podcast and then move into more intense questions about their careers and stuff like that.

B+C: Do you have a favorite guest so far?

Red Star Fletcher: Probably D’Arcy Carden, because I think we really connected. There was a very funny moment where I told her something about Siri and then we pulled out her phone and tried it. I thought that was very funny. Also, I think I like that one because a lot of my friends listen to my podcast and they all say that one was their favorite.

B+C: Why do you want to focus on talking to mostly female comedians?

Red Star Fletcher: I feel that women don’t really get to be out there with their careers and stuff like that. When you think of a career, you usually think of a career that is more man-oriented, like a fireman or a policeman. But there are a lot of amazing female comedians, and I want to shine a light on that because women really have a big role in our society, even though it’s hard to notice sometimes.

B+C: You and your mom have worked together on multiple art projects. What do you like about working with her?

Red Star Fletcher: I feel like it’s really great to work with my mother because we have more than just the bond of two people who are collaborating. We also have a mother-and-daughter bond. I think that really helps our artwork and makes it better. One thing she’s taught me is to never overthink things. Because if you get stressed out, it’s not going to be the best thing you can make because you were thinking about it too much.

Red Star Fletcher: The difference is probably the work topics. Me and my mother do most projects about us being female and Native Americans. With my dad, he’s the co-founder of this thing called “social practice.” How do I describe it? It’s where you make art, but it has more of a social aspect. We usually do more social practice-themed things.

B+C: Do you feel like people underestimate you because of your age?

Red Star Fletcher: Yeah, I actually deal with that a lot. When I’m collaborating with my mom, some people think that I’m her assistant or something. And also, it seems like since I’m a kid, I would know less because I haven’t been on the world long enough or something like that. Once I hear that it always drives me to do more so that I can prove them wrong. I usually actually take it as a goal, or I just don’t even think about it because it happens so often and it’s not worth my time, right?

B+C: Do you have a dream art exhibit that you’d like to create?

Red Star Fletcher: I really love cooking and I’m interested in creating sculptures made out of cake. I’d want to make one that everyone could eat. People would come and eat a certain amount of it. It’d have to be a big cake. I think that would be really cool because that cake would get to have more meaning — maybe it’s about how people are eating up the media or something like that, and it would be decorated like a media-themed cake.

B+C: What flavor cake would it be?

Red Star Fletcher: I would like to have seen the first female president and I would also like women to be getting paid the same amount as men. I would also want there to be more equality for animals because I am very interested in that — I’m a vegetarian. I want people to not hurt each other as much, like, not say mean things, not do mean things. And I’m very against what’s happening right now with all the children being separated from their parents, and I wouldn’t want that to still be happening by then.

B+C: What do you hope to be doing when you’re all grown up?

Red Star Fletcher: I actually have a lot of jobs I really want to get. I’m not sure if I’d get any of them, but I kind of want to be the chief justice of the Supreme Court or a boxer. A comedian would work too!

B+C: What do you say to other girls who have big career dreams like you but aren’t sure how to go about achieving them?

Red Star Fletcher: First is to always keep your eyes on the prize and don’t get a big ego about what you’re doing, because that can slow you down. And second, do what you love, because if people hear, see, or feel the love that you have in what you’re doing, they’re probably gonna love it too.