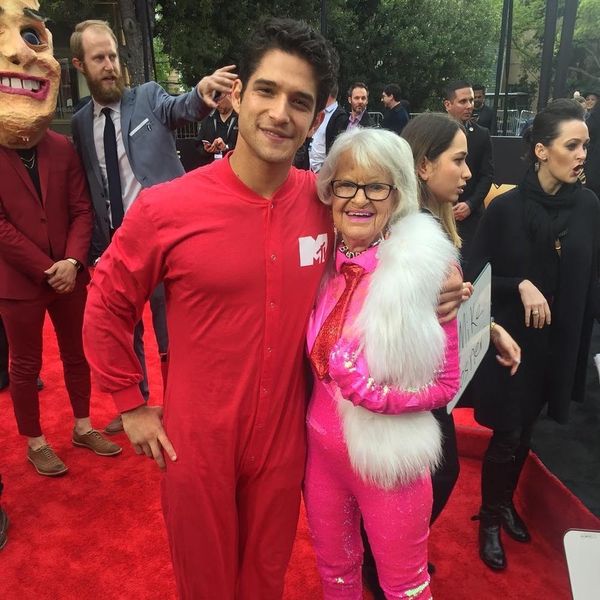 Yep, it’s almost that time of the year again when today’s hottest celebs convene to celebrate the year’s best movie moments. We’re talking about the MTV Movie Awards (so you know there’s going to be some crazy red carpet style). While the show is airing tomorrow night, the red carpet and taping is happening TODAY, which means it’s the perfect time for a sneak peek behind the scenes via social media.

1. Ariana Grande: The tiny songstress is going to be performing (we’re going to guess her new single “Dangerous Woman”) at the show and she’s been teasing her appearance on Snapchat to her fans. Ariana posted a snap of her pass along with the caption: “Can’t wait to sing.” (Photo via moonlightbae)

Post training bath towels laid over the seats due to extreme sweat, post training shake, iPhone charger cord and an XL cheese pizza of a smile that says the @MTV #MovieAwards ain't kickin' it's own ass tonight... We're on our way. #DaddysGottaGoToWork #CommenceThyAssKicking #FuckATux #Brothers @kevinhart4real

2. The Rock: The Rock is playing host at tomorrow’s award show and in preparation for it, he did what he does best: exercised. The actor posted this pic of himself post-workout and on his way to the show along with the caption: “Post training bath towels laid over the seats due to extreme sweat, post training shake, iPhone charger cord and an XL cheese pizza of a smile that says the @MTV #MovieAwards ain’t kickin’ it’s own ass tonight… We’re on our way.”

3. Kendall Jenner: The Kardashian-Jenner’s resident supermodel is presenting alongside her pal Gigi Hadid tonight and the pair even got ready together. Celeb hairstylist Jen Atkin created Kendall’s balled-ponytail coif and MUA Hrush Achemyan (who also does Kylie’s makeup from time to time) did the glam, so you know Kendall is going to be setting some trends tonight. Oh, and Kendall’s shoes took not one but two people to string up. Now those are some statement heels. (Photos via jenatkinhair)

Hey, everybody! The Damn Daniel boys are taking over my Snapchat at the daaamn MTV Movie Awards. 👻:ellen

4. Ellen Degeneres: The talk show host surrendered her Snapchat account to none other than the viral stars of “Damn Daniel,” Josh Holz and Daniel Lara. You can catch them on the red carpet chatting up celebs there!

5. Brit + Co: Yep, we’re at the MTV Movie awards this year, ya’ll, and we’re covering it live on the red carpet (psst… if you haven’t yet, add us: britandco!). Fingers crossed we get close enough to stare into Zac Efron’s baby blues. (Photo via britandco)

6. Rebel Wilson: The nominee for Pitch Perfect 2 posted this video of pre-show rehearsals in the rain no less. The show much go on, amirite? We bet there is going to be plenty of singing + dancing and frankly, we can’t wait.

It takes a village to raise a unicorn. Getting did for the @mtv #MovieAwards 🤗

7. Lilly Singh: The celeb YouTuber and the force behind the feature length YouTube film A Trip to Unicorn Island proved that it takes a whole team to get celebs looking as glam as they do on the red carpet. Here’s the star getting ready before the taping.

8. MTV: You can’t have a behind-the-scenes roundup of the MTV Movie Awards without including the channel’s own Instagram account. Of course, gearing up for tonight’s big event, they’ve got the scoop on the best goings on. Here’s actor Tyler Posey in a red MTV onesie posing with none other than pop culture personality Baddie Winkle, Miley Cyrus and Khloé Kardashian’s BFF naturally.

9. The Lonely Island: MTV Movie Award show presenter Andy Samberg’s comedy music trio is performing tonight is making a guest appearance tonight at the award show. The group’s first movie Popstar: Never Stopping Never Stopping is debuting on June 3, and without a doubt, we’re going to be hearing about it tonight.

10. Gigi Hadid: The supermodel flew into LA especially to be a presenter for tonight’s show and gave us a peek behind the scenes of her last fitting before showtime on her Snapchat. Whoa. That is a lot of clothing. (Photo via itsgigihadid)

Will you be tuning in for the MTV Movie Awards? Tweet us @BritandCo!

Kimberly Wang
Kimberly Wang writes about all things pop culture, tech, style, and beauty. She's a Bay Area transplant and has an MFA in Creative Writing from Columbia University. On a sunny New York day, you can find her hanging out with her mini schnauzer Isabelle Jellybean on a blanket in Central Park.
Celebrity Hair
Pop Culture
Celebrity Hair