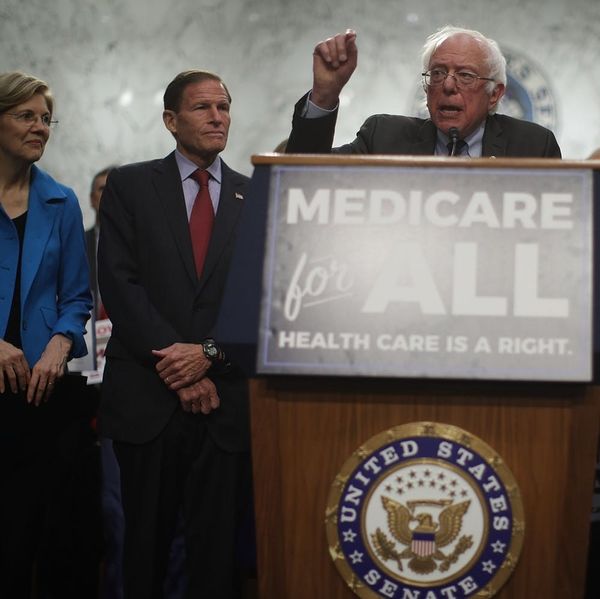 As the buzz around the Republican agenda to “repeal and replace” the Affordable Care Act (AKA Obamacare) has dwindled after multiple unsuccessful attempts to pass new legislation, Senator Bernie Sanders has introduced a bill he’s calling Medicare-for-All. The Independent senator from Vermont made Medicare-for-All, which is also called universal or single-payer health care, a signature issue during his 2016 presidential campaign, and though his competitor, Hillary Clinton, and other Democrats were critical of the plan at the time, several prominent, progressive Democrats are now lending their support.

Senator Sanders’ campaign certainly energized some of his colleagues in Congress and much of the Democrat and left base, but it’s certainly not new. In fact, Democratic Michigan Congressman John Conyers, Jr. has introduced a Medicare-for-All bill to every Congress since 2003, and similar proposals even go back to President Franklin D. Roosevelt. But now, it’s finally garnering significant traction in government. And it’s about time: According to a 2016 report from the Kaiser Family Foundation, 28.5 million Americans were without health insurance in 2015, despite the gains made by the ACA.

So what exactly would Medicare-for-All look like? How would it work? Here’s a quick guide to the new health care bill, how it would impact young women, and how it’s different from our current health care legislation.

Medicare-for-All is basically what it sounds like: Everyone would get health care coverage from the government. The legislation is designed so that Americans will pay for health care via their taxes, eliminating the need to buy private health insurance, especially for those who are unable to afford private or even government marketplace insurance. According to Sanders’ website, the bill would also eliminate employees’ reliance on their employers’ health insurance options, which can still be expensive and/or not provide adequate coverage.

Sanders’ website states that Medicare-for-All will cover “the entire continuum of health care,” including “inpatient to outpatient care; preventive to emergency care; primary care to specialty care, including long-term and palliative care; vision, hearing, and oral health care; mental health and substance abuse services; as well as prescription medications, medical equipment, supplies, diagnostics, and treatments.” Universal health care would also include coverage for abortions. This is a significant expansion of the coverage guaranteed under the ACA, which covers 10 specific areas of “essential care.”

Among citizens, the idea of universal health care is quite popular. Even some Republican voters agree that the government should play some hand in covering health care. But Medicare-for-All has never received broad support in Congress, even among Democrats. But the tides are changing a bit.

A lot of people have questions about how Medicare-for-All would actually work in practice. A major concern is the expense. According to Sanders’ website, the Medicare-for-All would cost an estimated $1.38 trillion per year. If the bill passes, it would be paid for largely through increased taxes on the wealthy and contributions from employers.

But as Sanders noted in a New York Times op-ed this week, “We remain the only major country on Earth that allows chief executives and stockholders in the health care industry to get incredibly rich, while tens of millions of people suffer because they can’t get the health care they need.” Though there are concerns about how this model would play out, myriad countries in Europe, Africa, Asia, and the Americas already offer universal health care or heavily subsidized health care, and have for many years.

The big question right now, however, is whether or not the bill can even pass through Congress. Put bluntly: It doesn’t seem likely, at least not right now. While a number of Democrats are supportive, moderate Democrats especially have been and continue to be resistant to universal health care legislation. And even with more support from Democrats, there’s little chance that a bill this progressive could pass in a Republican-dominated Congress.

What do you think of Medicare-for-All? Tell us @BritandCo!