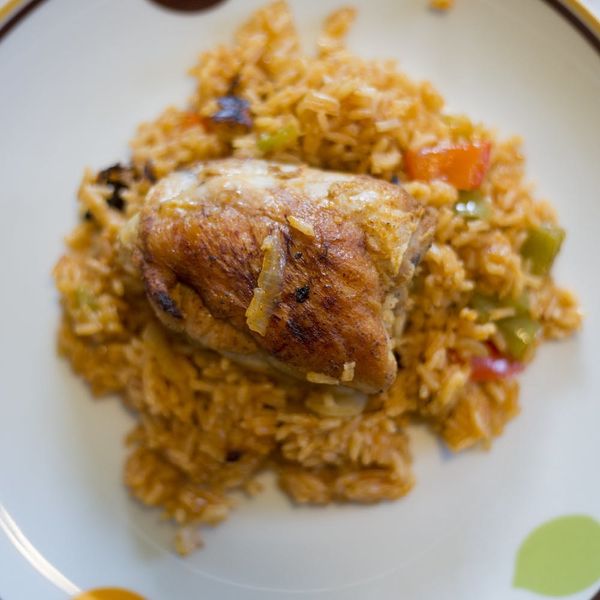 Arroz con pollo is one of those classic Latin American dishes that everyone needs to try at least once in their lifetime. It includes two dinnertime staples: both arroz (rice) and pollo (chicken). I turned to a trusted source, the Food Network, to make it for the first time. This recipe from Melissa D’Arabian, host of Ten Dollar Dinners, had a five-star rating with more than 90 reviews, which seemed like a pretty good ratio for giving it a try. Here’s what I learned after trying to make arroz con pollo for the first time.

I may leave the chicken skin on next time. Real talk — when D’Arabian’s recipe calls for “chicken, skinned,” I had to steel myself. I originally bought the first package of tasty looking thighs at the supermarket without thinking, and mine had the skin on it still. It turns out the process of de-skinning chicken is relatively simple — you just pull the skin taught and slice it off as you go. It seems D’Arabian’s recipe is a departure from the norm as arroz con pollo is usually prepared with the skin on. While the chicken came out juicy and flavorful thanks to the spice rub used beforehand, I feel like a crispy, seasoned skin on the outside of these thighs would only improve upon an already delicious dish (as well as save my fingers — my knives are not good enough to repeat the skinning process).

Arroz con pollo‘s great for leftovers. D’Arabian’s recipe for arroz con pollo makes about four hefty servings, meaning it’s a wonderful make-ahead meal. I ate it for at least four more meals throughout the week, and it reheated well every time. The thighs and rice were tender and flavorful, and because D’Arabian swaps seasonings and tomato sauce for any saffron or stewed tomatoes, the recipe itself is easy to follow regardless of your skill level. The garlic, cumin, and cayenne pepper combined perfectly for just the right amount of kick that you could taste all the way through the dish — from the chicken to the rice to the veggies. I loved the way these spices came together and would definitely try this rub in other chicken recipes.

There’s room for a little creative improvisation. My stovetop could probably power a NASA rocket. Because I did not adjust D’Arabian’s instructions to account for the mini volcano I was cooking on top of, I definitely burnt my version a little bit. Luckily, arroz con pollo is one of those homey dishes that has room for forgiveness. I just considered my crispy rice a little creative flair.

Overall, the best part of cooking this recipe was trying a new combination of flavors in my own kitchen. That jar of cayenne has been sitting on my spice shelf for I don’t even know how long, and I would’ve never thought to mix it with cumin. And of course, I didn’t mind that my tiny little studio smelled like amazing arroz con pollo for the rest of the afternoon.