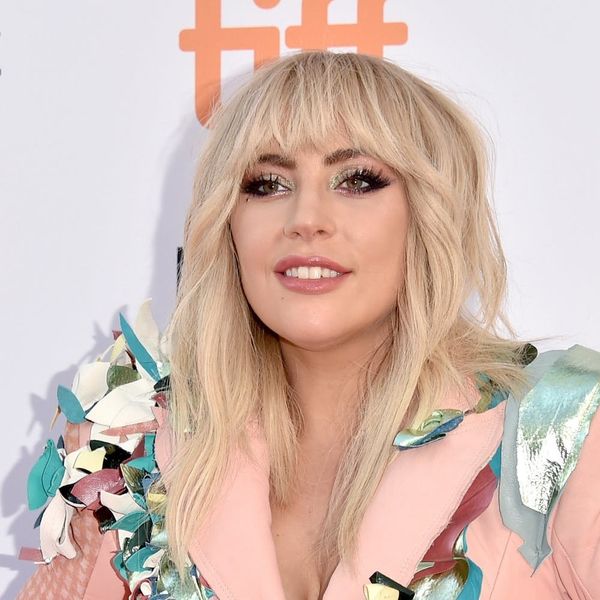 Lady Gaga’s new, much-anticipated Netflix documentary, Gaga: Five Foot Two, was released to much fanfare this weekend, and for good reason: For nearly two hours, director Chris Moukarbel gives us an unprecedented look at the singer like we’ve never seen her before. We see her with her roots showing. We see her in sweats. We see her sobbing in pain and also in heartbreak. In short? We see Gaga for what she is when all the glitz and glam is stripped away: human. While she admits that the experience left her both empowered and vulnerable, she also says every moment shared is REAL. Click through to read up on all the best scenes from the film, then watch in its entirety here.
When She Explains Her Reasoning for All Those Crazy Outfits: In the past 10 years, there’s been no escaping the insanity that is Gaga’s fashion sense, and early on in the film, we finally learn the real reason behind her madness: patriarchy. “The methodology behind [my crazy looks] is when they wanted me to be sexy and they wanted me to be pop, I always f*cking put some absurd spin on it that made me feel like I was still in control,” she explains. She went on to say, “If I’m going to be sexy at the VMAs and sing about the paparazzi, I’m going to do it while I’m bleeding to death and reminding you what fame did to Marilyn Monroe, the original Normal Jean, and what it did to Anna Nicole Smith, and what it did to… yeah. Do you know who?” ( Amy Winehouse).
When She Gets Real About Her Insecurities: Though she may be a confident woman on top of the world to outsiders looking in, we quickly learn that the 31-year-old is just like the rest of us, slowly learning to love herself one day at a time. In a raw moment alone between her and the film’s cameraman while taking in some fresh air, she shares, “I never felt confident enough to just sing and just be this way now. To just sing or wear my hair back. I never felt pretty enough or smart enough or a good enough musician — that’s the good part. The good part is that I just never felt good enough. And I do now.”
When She Plays “Joanne” for Her Family: Arguably no moment in the film is more poignant or powerful than when Gaga plays “Joanne,” which was written for her aunt of the same name, for her father and grandmother. As the “Grigio Girls” singer tells it, her late relative, an artist, died of Lupus at age 19 after her grandmother refused to amputate her daughter's hands, despite doctor recommendations. The background story makes the moment Gaga plays the tribute she's written for her even more sentimental.
Her Acoustic Performance of “Bad Romance:” Though we see several performances from the singer throughout the film, her acoustic performance of “Bad Romance” at an honorary 90th birthday dinner for Tony Bennett at NYC’s Rainbow Room was enough to give us chills.
When She Hits Up Walmart to Get an Edge Over the Competition: One can’t help but laugh as Gaga rearranges the CD section of a local Walmart to feature her own album more prominently, telling the manager, “We were just coming to check on it, because the record business is tough, you know?”
When She Has Her First Fender Bender… With a Parked Car: It was just last year that Gaga obtained her driver’s license, so we can totally empathize with the pop star, who has a rather embarrassing moment when she hits producer Mark Ronson’s car in the driveway before an epic recording sesh with none other than Florence Welch of Florence and the Machine.
When She Gets Her Makeup Done at the Doctor: For every down-to-Earth moment the songwriter shares with her audience, of which there are many, there’s also a moment of absolute ludicrousness that could only come with her next-level fame. Take, for example, the time she’s at a doctor’s appointment with a makeup artist simultaneously working their magic on her face. “Who gets their makeup done while they’re getting, like, a major body treatment?” she asks incredulously. Only you, Gaga. Only you!
When She Opens Up About Her Pain: By now, Gaga has made her struggles with chronic pain from both a 2013 hip injury and fibromyalgia publicly known, citing her health as the reason for the recent cancellation of her European tour, but seeing her wince in agony as she cries on her couch makes it all the more humanizing and real. “Do I look pathetic?” she asks as she bursts into sobs. “I’m so embarrassed.” Quite the contrary, Gaga: You look heartbreakingly human, and we love you for it.
When She Performs on the Roof of Paul Colby’s The Bitter End in Celebration of Her Album Release: Gaga’s triumph is palpable as she finishes crooning the soul-touching chords of her track “Angel Down,” from the awning of the Greenwich Village hotspot. Rock and roll, baby!
When She Has a Mini Meltdown on the Set of American Horror Story: If nothing else, this scene proves that even Gaga has a bad day at work from time to time. *Shrugs *

What was your favorite moment from the film? Share with us @BritandCo.

What was your favorite moment from the film? Share with us @BritandCo.

Nicole Briese
Nicole is the weekend editor for Brit + Co who loves bringing you all the latest buzz. When she's not busy typing away into the wee hours, you can usually find her canoodling with her fur babies, rooting around in a bookstore, or rocking out at a concert of some sort (Guns N' Roses forever!). Check out all her latest musings and past work at nicolebjean.com.
Celebrities
Movies
Celebrities Movies Netflix
More From Movies