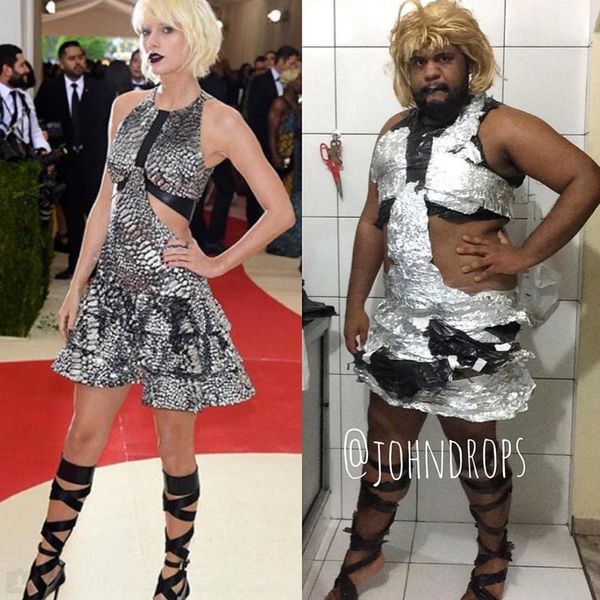 Sure, the red carpet is great, but Brazilian-based blogger João Paulo is quickly becoming one of our favorite reasons to follow major celebrity fashion moments. Paulo first showed off his epic runway copycat DIY skills as the 2016 Golden Globes unfolded. He recreated J. Lo’s yellow gown with a towel and Katy Perry’s bump-it hairstyle with a rag. As last night’s Met Gala looks made their way down the red carpet and onto the Internet, Paulo was quick to replicate them with items he found around the house.

First up: Taylor’s gothic-chic look. Paulo skipped the visit to Louis Vuitton and instead copied the look with tin foil and slivers of black trash bags.

We’re going to say best dressed might have to go to Solange on this one. However, Paulo’s version could very well be what Solange’s dress looks like after too much dancing at the after party.

What was your favorite meme moment that went down during last night’s Met Gala? Share with us on Twitter @BritandCo.

Cortney Clift
Cortney is the senior writer and special projects editor at Brit + Co. She typically covers topics related to women's issues, politics, and lifestyle. When she's not buried behind her computer you'll find her exploring New York City or planning her next big adventure.
Style News
More From Style News