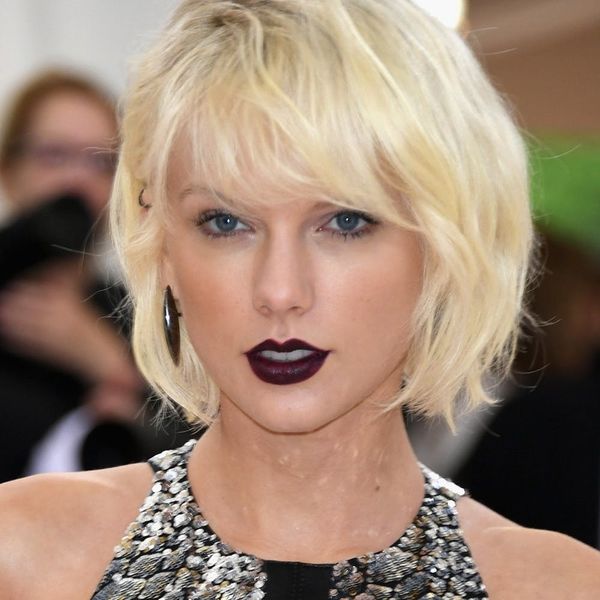 Celebrity style transformations tend to happen one of two ways: slow and subtle or overnight. In the recent case of Taylor Swift, it appears she’s chosen the latter. It all kicked off a few weeks ago with that Vogue cover, where she’s seen rocking bleach blonde hair. Everyone assumed it was a wig until she snapped a photo at Coachella still rocking the lightened locks. But paired with the new ‘do? Not those adorable high-waisted two-pieces we know and love her for. Instead, she’s now rocking black slip dresses, chokers, leather jackets and oh ya, the vampiest of vampy lips. If you had any doubt that Tay Tay is currently in the midst of a MAJOR style revamp, please allow us to show you the look she rocked at this year’s Met Gala.

Taylor, who is a co-chair at tonight’s event (AKA the biggest event of the year in the fashion industry), showed up in this silver Louis Vuitton dress that’s a far cry from the girly pink gown she wore to the same event in 2014. The look was inspired by the night’s theme: “Fashion in an Age of Technology.”

To top off the Bad Blood-esque outfit: some ultra dark (almost black) lips. This isn’t the first time Taylor has been spotted rocking this color. She also wore a similar get-up over the weekend to her BFF Gigi’s 21st birthday. Apparently, she’s as much of a fan of the contrast as we are. Hello, new Taylor. We love you already.