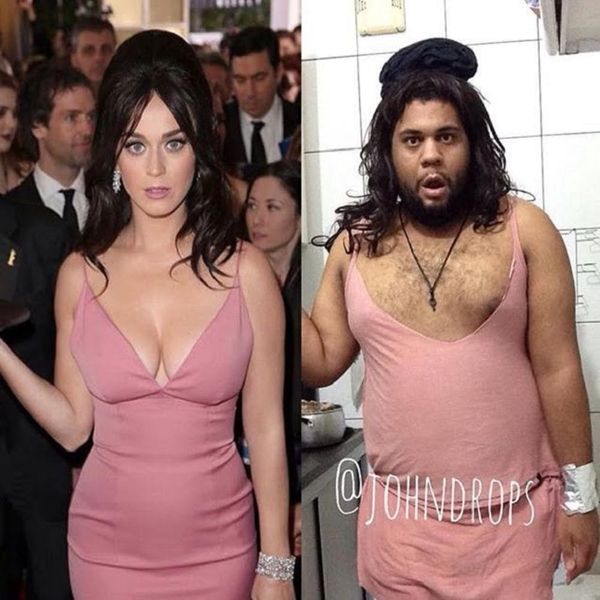 Advertising student John Urbani just proved to the world that it’s easier to get those red-hot celebrity looks at home than you think with his hilarious Instagram account, @johndrops. While Urbani has been parodying red carpet looks for a while (including THAT Miley Cyrus VMA hosting get-up), we’re dying over tonight’s nods to Katy Perry and JLo.

With a pot as a sub for her silver clutch and some tinfoil for a lariat, Urbani channels JLo in a towel-turned-cape. His expression completes the look.

Ripping a deep V into a pink piece of cloth, Urbani could basically be, um, Perry’s twin. Throw in some tinfoil for her sparkly bracelet and his very-own Bump-It, and you’ve got a red carpet stunner.

Hey, if you’ve got it (creativity, that is), flaunt it!

What’s your favorite of Urbani’s Looks? Let us know @britandco.

Nicole Briese
Nicole is the weekend editor for Brit + Co who loves bringing you all the latest buzz. When she's not busy typing away into the wee hours, you can usually find her canoodling with her fur babies, rooting around in a bookstore, or rocking out at a concert of some sort (Guns N' Roses forever!). Check out all her latest musings and past work at nicolebjean.com.
Golden Globes
Pop Culture
Golden Globes Red Carpet