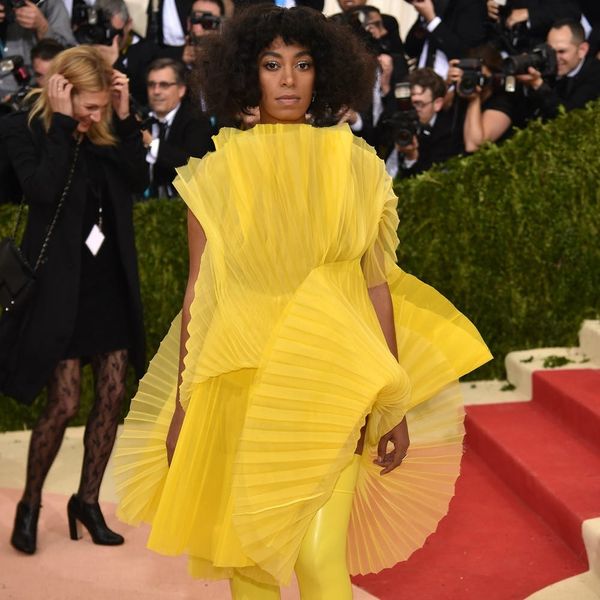 For nearly every magnificent, out-of-this-world dress we saw on last night’s red carpet, there was one that was just as equally (if not more!) insane: You know, the type of ensemble that definitely commands attention… and, well, that’s about it? While years prior have certainly had their share of crazy outfits, last night just may have taken the cake — but we’ll let you be the judge! Without further ado, behold, the 15 looks that had us scratching our heads in true “WTF” fashion.

1. Solange Knowles: We’ve gotta hand it to her — girl knows how to make an entrance! Do we dare even try to describe this David Laport insanity? Sesame Street couture? One part origami extravaganza, one part cupcake wrapper? (How’d we do?) (Photo via Dimitrios Kambouris/Getty)

2. Alicia Vikander: The Louis Vuitton spokesmodel has been knocking it out of the park with the brand all awards season long, but hey, even an-all star strikes out from time to time. This half-Lederhosen, half ice skater ensemble wasn’t our fave. *shrugs* (Photo via Larry Busacca/Getty)

3. Miranda Kerr: Is it just us, or do primary colors never seem to work past grade school? This colorblocked Louis Vuitton two-piece certainly seems to add fuel to that thought’s fire. (Photo via Dimitrios Kambouris/Getty)

4: Sarah Jessica Parker: We love us some SJP but we’ve gotta say… compared to some of the other looks we’ve seen tonight, her Met Gala look fell a little… flat? We’re having flashbacks to that time Carrie tried to go for understated with a vintage white suit over Vivienne Westwood couture — come to think of it, this Monse getup isn’t far off! Not terrible, per se, just… underwhelming. (Photo via Larry Busacca/Getty)

5: Demi Lovato: We’re always glad to see our gal feeling so confident on the red carpet, but this Moschino frock had us feeling a little… mixed up. (Photo via Larry Busacca/Getty)

6. Lady Gaga: You never know quite what you’ll get with Lady Gaga when it comes to fashion (whether it will be a meat dress or a super-chic pantsuit is really anyone’s guess), but this particular Versace pick was a bit of a letdown. We can’t help it — we were expecting more from mother monster. With such a cool theme, this was a chance to make fashion history, and instead, we feel like she played it safe with a throwback to some of her earlier escapades. The bodysuit, the crazed shoes… it’s been done, Gaga. And by you, no less! (Photo via Dimitrios Kambouris/Getty)

7. Grimes: Sans Taylor, Louis Vuitton was striking out left and right when it came to last night’s red carpet. This look in particular seemed far too casual for such a distinguished affair, and frankly, a bit out of place (although we’re totally digging those rose-gold tips!). (Photo via Larry Busacca/Getty)

8. Michelle Monaghan: While we applaud both Michelle Monaghan and Emma Watson for their efforts to be friendly to the environment — both gals incorporated recyclable materials into their looks —Michelle’s Rose Assoulin creation came a little too close to our Hefty bags for comfort. We prefer Earth-friendly and pretty pieces (it IS possible. See: Reformation for proof). (Photo via Dimitrios Kambouris/Getty)

9. Kendall Jenner: Perhaps Kendall Jenner was exhausted from slaying the red carpet at the White House Correspondents’ Dinner just two nights ago, where Obama roasted the young model, but we can’t quite “wrap” our heads around this Versace dress/ball of yarn. Hey, you win some, you lose some! (Photo via Dimitrios Kambouris/Getty)

10. Madonna: It was a battle of the buttcheeks between Madonna and Gaga last night with no clear winner in sight. In all fairness, not many could pull off this Givenchy showstopper (at least not in public)! (Photo via Dimitrios Kambouris/Getty)

12. Nicki Minaj: Hmmm. Maybe Nicki mistook ‘Machina’ for ‘Moschino’? That’s the only explanation we could come up with for… well, this. (Photo via Dimitrios Kambouris/Getty )

13. Tabitha Simmons: Uh, did anybody remember to tell Tabitha that China: Through the Looking Glass was last year’s theme, orr? (Photo via Andrew Toth/Getty)

14. Saoirse Ronan: Wait a minute… isn’t Emma Stone supposed to be playing Cruella de Vil in the upcoming Disney remake, or are Saoirse Ronan and Christopher Kane pulling a fast one on us? (Photo via Dimitrios Kambouris/Getty)

15. Julie Macklowe: Okayyyy, we we can at least appreciate where she was going with this one (hey, it does fit the evening’s theme, and rather well, might we add), but the execution left a bit much to be desired. (Photo via Larry Busacca/Getty)

Would you rock any of the looks above? Let us know @BritandCo!

Nicole Briese
Nicole is the weekend editor for Brit + Co who loves bringing you all the latest buzz. When she's not busy typing away into the wee hours, you can usually find her canoodling with her fur babies, rooting around in a bookstore, or rocking out at a concert of some sort (Guns N' Roses forever!). Check out all her latest musings and past work at nicolebjean.com.
Red Carpet
Style News
Red Carpet
More From Style News