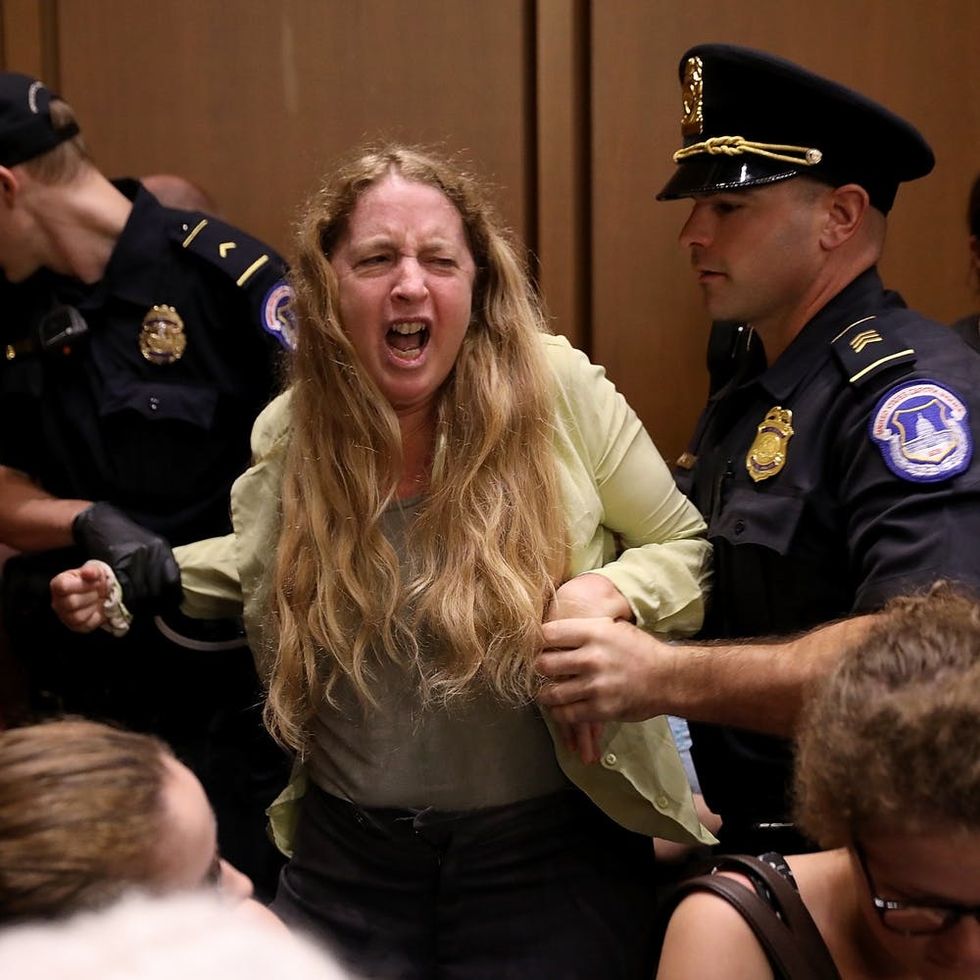 Supreme Court hearings for President Trump’s latest SCOTUS nominee, Brett Kavanaugh, began Tuesday. As senators proceed to question the right-wing judge on Capitol Hill, anxieties mount from the left over the fate of numerous constitutional rights and protections — especially Roe v. Wade — that could come into jeopardy if Kavanaugh is confirmed. While reproductive rights activists have been building momentum against his appointment for weeks, the tense first day of confirmation hearings turned up the volume on Kavanaugh’s opposition.

More than 100 lawyers from the Lawyers’ Committee for Civil Rights signed a letter Tuesday expressing concern over Kavanaugh’s willingness to interpret the law fairly. The Committee’s letter notes that members have reason to be worried about the impact Kavanaugh would have on “voting rights, criminal justice, fair housing, employment discrimination, economic justice, reproductive rights, and environmental justice.”

Almost immediately, the hearing was interrupted by protesters. At least 22 activists stormed the Senate floor and were arrested for disorderly conduct by 10:19 am local time, according to live tweets from NBC News producer and reporter Frank Thorp V. Protesters dressed as handmaids from Margaret Atwood’s The Handmaid’s Tale were also in attendance on Capitol Hill, in what has become a common feature of demonstrations that concern reproductive rights. (Though Kavanaugh has remained vague about his official position on the constitutional right to abortion, his record on reproductive rights has sounded alarms, particularly his dissent in an October 2017 DC Circuit court decision allowing a 17-year-old undocumented detainee to obtain an abortion.)

There is further concern from the left over the Trump administration’s decision to use executive privilege to withhold 100,000 documents with information about Kavanaugh, an unprecedented move in any SCOTUS candidate’s confirmation.

A number of Democratic senators have cited the stash of documents as the reason they’ll vote against Kavanaugh. Hawai’i Senator Brian Schatz tweeted on Tuesday that he “will note no,” calling the confirmation process “illegitimate” so long as Kavanaugh’s records remain blocked from Congress. New Jersey Senator Corey Booker tweeted similar remarks, implying that Kavanaugh must have something to hide.

Republicans hold a slim majority in the Senate (50-49 over the Democrats), enough to confirm Kavanaugh. Additionally, Arizona Governor Doug Ducey announced Tuesday that former Senator Jon Kyl will be taking the late John McCain’s seat in the Senate. Kyl and Kavanaugh, the New York Times reports, are friendly with one another.

Both Collins and Murkowski have previously said they would not vote to confirm a nominee who would overturn Roe v. Wade.

With several days to weeks ahead before the Senate will vote, it remains to be seen how many Republicans will listen to the growing number of voices who want to make sure Kavanaugh stays off the Supreme Court.

Elizabeth King
Elizabeth King is a politics, history, and culture writer based in the Twin Cities. She is generally pretty cranky but still enjoys traveling, music from the early 2000's, and plotting the resistance. Feel free to say hi on Twitter at @ekingc or check out some of her work at www.elizabethcking.com.
Activism
Politics
ActivismControversyPolitics

Using Personal Experience As A Springboard To Help Others