How to Fight Back After a Key Supreme Court Retirement Has Left Roe v. Wade in Peril 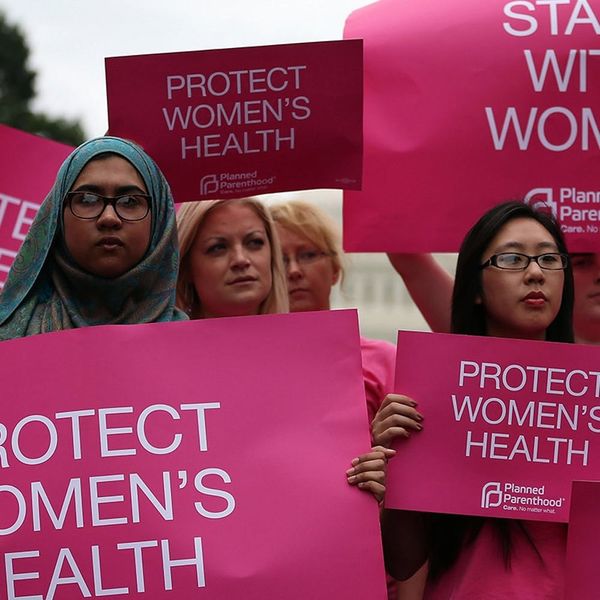 As of this week, it’s no exaggeration to say that abortion rights and women’s health are facing their greatest challenge in recent history. There is a path to reverse Roe v. Wade, the landmark decision that crucially established abortion as a valid, legal medical service in our health care system — and that path just became a lot clearer.

Why was this week such a big deal?

On Tuesday, the Supreme Court issued its decision on NIFLA v. Becerra, and in a 5-4 ruling, upheld the right of “crisis pregnancy centers” to lie to disproportionately low-income pregnant women, and obstruct their ability to make informed choices about their reproductive health. The deciding vote was President Trump’s first judicial appointee, Neil Gorsuch. Gorsuch was confirmed last year in place of President Obama’s failed attempt to appoint Merrick Garland in 2016.

Gorsuch’s vote in NIFLA was the first indicator this week of the precarious standing of safe, legal abortion in the US. But it wasn’t even the biggest one: On Wednesday, Justice Anthony Kennedy, who has served as a crucial swing vote throughout his decades-long career, announced his intent to retire. Since then, Trump has announced he will choose his next Supreme Court nominee from a list of 25 potential nominees. He has previously stated that whoever he chooses will be anti-abortion.

On multiple occasions, Trump and Vice President Pence have explicitly stated their intent to stack a Supreme Court of anti-choice justices who would reverse the precedent of Roe v. Wade. This would send the legal right to a safe abortion back down to the state level, which would mean that abortion would only be legal in states with existing laws that explicitly protect it. In states without these codified protections, women would either have to shoulder the costly, sometimes dangerous burden of traveling out-of-state for the procedure, or could be forced to carry to term or attempt to self-terminate.

Overturning Roe was essentially a campaign promise of this administration, and anyone who is chastising women for “fearmongering” about the future of reproductive rights is either ignorant to this reality, or simply gaslighting women. Even leading Democrats like Joe Biden, Nancy Pelosi and others have dismissed concerns and the urgency of protecting abortion rights by calling it a settled — or, in Pelosi’s words, “fading” — issue. But this week, that couldn’t be further from the truth.

As writer Hayley Macmillen put it in a Wednesday tweet, “If your first instinct is to insist things aren’t ‘that bad’ or to try to talk others out of their anger and fear, please ask yourself why you feel the need to minimize serious pain and real threats to safety, health, and rights. Then ask why you’re not doing something instead.”

If your first instinct is to insist things aren’t “that bad” or to try to talk others out of their anger and fear, please ask yourself why you feel the need to minimize serious pain and real threats to safety, health, and rights.

Then ask why you’re not doing something instead.

Outside of the courts, this administration has proposed slashing Title X funding to Planned Parenthood and all organization’s that offer abortion services, a domestic gag rule to allow doctors to withhold information about abortion, and the prioritization of abstinence-only sex ed programs, and successfully repealed the contraceptive mandate — which allowed 55 million women to access birth control copay-free, and saved women $1.4 billion in 2013 alone — last year.

Trump has already appointed an eighth of all circuit court judges, and as Republican-dominated state legislatures continue to pass extremist anti-abortion laws, these inevitably incite lawsuits that often make their way to circuit courts. This past year alone has seen Mississippi enact a 15-week abortion ban in March, only for it to be immediately, temporarily blocked by a federal judge. In the months that followed, Iowa’s Gov. Kim Reynolds signed a law that essentially bans abortion at six weeks (before many women realize they’re pregnant.) That law is also being challenged in court, while a law essentially banning medication abortion in Arkansas was also recently turned away from the Supreme Court after being upheld by the Eighth Circuit.

Extreme legislation like this often serves two key purposes — to either pass and dictate the reproductive decisions of women in that state or to trigger lawsuits that anti-choice lawmakers hope will make it to the Supreme Court. Any case about abortion, with a majority of Supreme Court justices opposed to Roe v. Wade, could trigger a reversal on the 45-year-old landmark decision.

If you’re wondering what happens next, be comforted in knowing that we can all take part in this fight, whether it’s through sharing content on social media, to showing up to rallies, to doing anything on this list:

1) Call your senators. Ask that they work to postpone voting for Trump’s nominees until after midterms, and reject any nominee who would reverse Roe v. Wade.

2) Call your state legislators. Ask them to support legislation to codify abortion rights into your state’s constitution.

3) Donate to abortion funds. Find the abortion fund that serves your region, and offer a donation that could help women pay for the procedure and travel and lodging fees.

4) Volunteer to be a clinic escort. Learn about volunteering opportunities at your local Planned Parenthood clinic here, or reach out to your local clinic about their needs and how you can support them.

5) Vote. Register to vote, help get other people registered to vote, and vote for representatives who will reject anti-choice judicial nominees and support abortion rights on the state level. This year’s midterms will decide the nation’s future — and as voters, we have the power to steer the course.