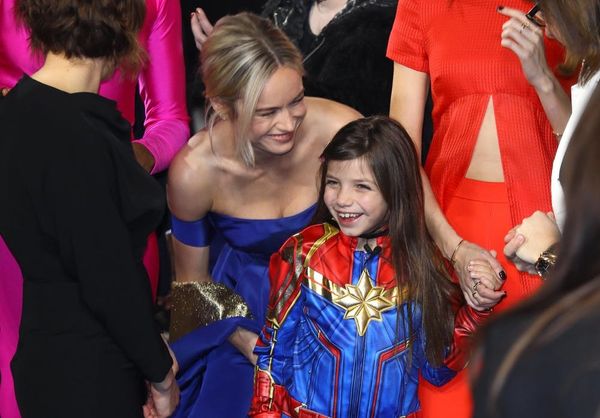 We are so ready to watch Brie Larson suit up as Captain Marvel in the first woman-led movie in the Marvel Cinematic Universe. And we’re not the only ones: A new photo from the film’s premiere shows exactly why it’s so important for kids to see female superheroes on the big screen.

As Larson walked the blue-and-gold carpet at the London premiere on Wednesday, February 27, she met and spoke with a young girl who was decked out in her superhero best, wearing a replica of the red, blue, and gold Captain Marvel suit that Larson’s character, Carol Danvers, wears in the film.

The 8-year-old, named, Illy, also had the opportunity to ask Larson some questions, and later posed for photos with the actress and Samuel L. Jackson, who also stars in the film.

Marvel UK and Ireland’s Twitter page shared some sweet snaps of the encounter, as Larson herself retweeted it and wrote of Illy, “She’s my hero!”

According to Entertainment Weekly, the memorable moment was set up by an organization called The Female Lead, a nonprofit organization that is “dedicated to making women’s stories more visible and offering alternative role models to those ever-present in popular culture.”

Larson’s historic role has been generating buzz since it was first announced more than almost three years ago. Captain America himself, fellow MCU star Chris Evans, recently shared his own excitement over the film, tweeting an epic photo of Larson in front of a massive billboard of her character. “What a photo!” he wrote.

What do you think of mini Captain Marvel? Let us know @BritandCo!