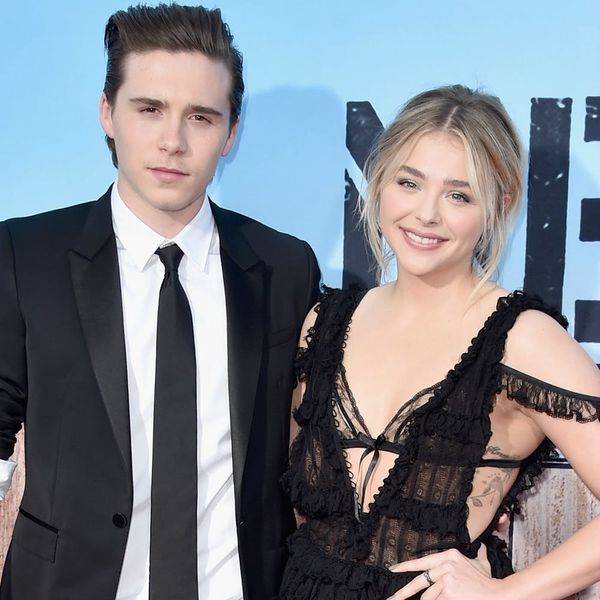 Chloe Grace Moretz and boyfriend Brooklyn Beckham have pretty much been making us swoon with their saccharine-filled romance ever since they got back together in May — from their awww-inducing red carpet debut to their sugary sweet LDR social media love notes, this couple is just TOO CUTE.

Her recent interview with Elle.com, however, in which she reveals the heart-melting advice her beau gives her on the reg regarding body image, just may take the cake.

Though she makes it clear she doesn’t NEED a man to validate her self-worth, Chloe does say that the support that Brooklyn gives her when she’s feeling less than perfect is invaluable. “When I’m feeling bad about myself, he’s like, ‘Stop. Look at what you say in interviews. Look at what you stand for. Listen to your own words, because you’re as beautiful as you say you are! All young women are more beautiful than they think, you know. And I like you more in sweatpants than I do when you’re on the red carpet.”

WOW. Are we sure he’s only 17? Those are some mighty wise words for such a young man. Posh and David did a bang-up job with that one, that’s for sure!

Hey @brooklynbeckham I like the way ya look at me, that's all :)

Judging by this photo, which Chloe sweetly captioned, “Hey @brooklynbeckham, I like the way ya look at me, that’s all,” we think it’s safe to say he means every word.

Chloe also says that she did some heavy self-reflection of her own in order to overcome those bad days. “When I was 16, I wanted a boob job. I wanted the fat pad under my chin to be removed. I wanted a butt reduction, or whatever. And my mom said ‘Absolutely not, you’re not allowed to have plastic surgery.’ And because of that, I found a lot of power through my insecurities. They’re what make me who I am now.”

Here, here, Chloe! Take it from your BF — you’re a total babe.

Do you think Brooklyn is the sweetest boyfriend ever? Tell us over @BritandCo!

Nicole Briese
Nicole is the weekend editor for Brit + Co who loves bringing you all the latest buzz. When she's not busy typing away into the wee hours, you can usually find her canoodling with her fur babies, rooting around in a bookstore, or rocking out at a concert of some sort (Guns N' Roses forever!). Check out all her latest musings and past work at nicolebjean.com.
Body Positive
Celebrity News
Body Positive Celebrity Couples love
More From Celebrity News