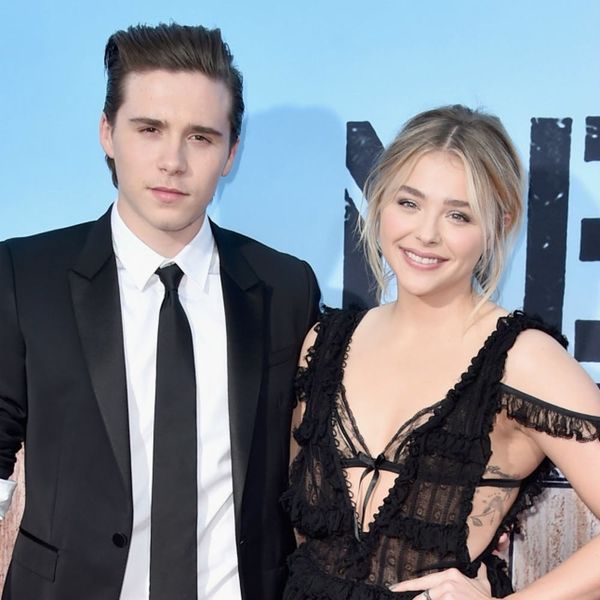 It’s always fun to play the are-they-aren’t-they guessing game when it comes to celebrity couples. Spotting them out at dinner or holding hands, or even just hearing rumors around Hollywood make it fun to imagine our fave celebs hanging out with a little Netflix + Chill when they aren’t rocking the red carpet. After officially announcing their relationship back in May, super cute teen couple Chloë Grace Moretz and Brooklyn Beckham are really letting their relationship become public in the most adorable way.

In an Instagram post, Brooklyn, oldest son of Becks and Posh, shared an adorable photo of his GF from their first ever red carpet as a couple at the premiere of her movie Neighbors 2: Sorority Rising, adding the caption, “When you’re missing bae :(.”

The teenage pair are long distance, since Chloë lives in LA and Brooklyn lives with his family in the UK, where he attends school. In an interview with L’Uomo Vogue, Beckham said being long distance is hard and that he can’t decide between LA and London, in large part, because of Chloë.

Hopefully, the pair will be reunited over the summer and they’ll share their Instagram-worthy moments with us!

Do you take romantic snaps with your S.O. for Instagram? Tell us @BritandCo!

Kat Armstrong
Kat has been a writer, social media maven and mom for longer than she's willing to admit. She's also spent time in front of and behind the camera, interviewing celebs, politicians and acting as a producer for fashion and artistic photography shoots. When she isn't writing for various orgs and publications, she's hanging with her kids, husband and French Bulldog, Peter, in Toronto, Canada.
Dating
Celebrity News
Dating love