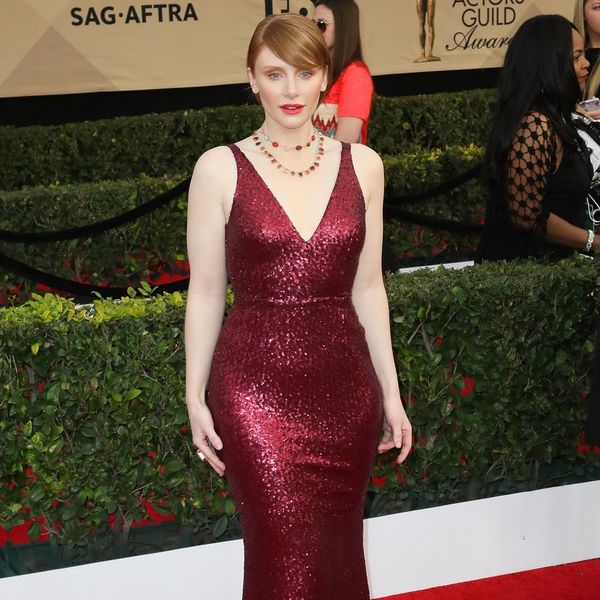 Bryce Dallas Howard continues to prove that she’s just like us. The Black Mirror actress has been super honest about frequenting department stores in the past to find gowns when she needs something fancy schmancy. She wore that navy blue Jenny Packham from Neiman Marcus to the Golden Globes 2017, then a mustard Topshop maxi dress to the People’s Choice Awards, and last night she took to the Screen Actors Guild Awards in a Dress the Population stunner.

Turns out, this is just the easiest way for her to have several options at her fingertips. “I like having lots of options for a size six, as opposed to maybe one option,” she said. “I always go to the department store for this kind of stuff.”

Every month, founder Franklin Morales picks a garment from his collection and donates five percent of its online sales to whatever charity customers and employees vote on. This month, half of the proceeds of the company’s Teresa gown will go to The Trevor Project, a national 24-hour toll-free confidential suicide hotline.

Good on Bryce for highlighting a brand that not only looks good but feels good to support too.

What did you think of Bryce’s dress? Tweet us @BritandCo!

Channing Hargrove
Channing Hargrove is a freelance fashion editor and writer in New York City. When she isn’t writing about clothing (or shopping, for research, of course), Channing is writing about life in a tiny studio apartment in a big city — and what she’s wearing — on her blog, Channing in the City.
Budget-Friendly
Celeb Style
Budget-Friendly Celebrity Style
More From Celeb Style