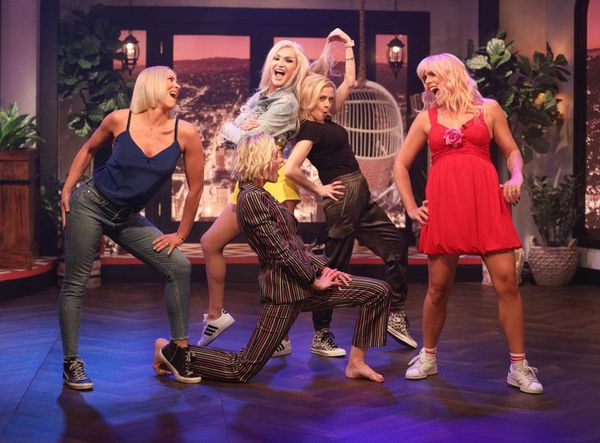 Talk about a perfect #TBT! On the Thursday, April 4, episode of Busy Tonight, Busy Philipps and her costars from the classic 2004 comedy White Chicks recreated their epic dance battle scene, and watching it will make you instantly nostalgic for the era.

Jaime King, Brittany Daniel, and Jessica Cauffiel all appeared on the show for the movie’s 15-year anniversary and were game to bust out their iconic moves from the Wayans brothers flick, with one slight exception: King had injured her foot and couldn’t join. Luckily, Philipps had a contingency plan.

“Jaime re-injured her foot that she had injured filming her TV show,” Philipps told the audience. “But luckily for us, let’s bring out Jaime Queen!” RuPaul’s Drag Race alum Sonique then appeared from backstage and stepped in, not missing a beat. King watched from a nearby chair and joined the squad for a final few small moves and a one-knee pose at the end.

The original scene found the crew squaring off against the “Wilson sisters” (Shawn and Marlon Wayans) in a dance battle to Beyoncè’s “Crazy in Love.” Unfortunately, the Wayans weren’t present for Thursday’s reunion, but we can pretend, right?

Philipps and her costars didn’t reveal whether they’d rehearsed extensively to recreate the scene or if it was done from memory, but watching it felt like no time had passed at all.