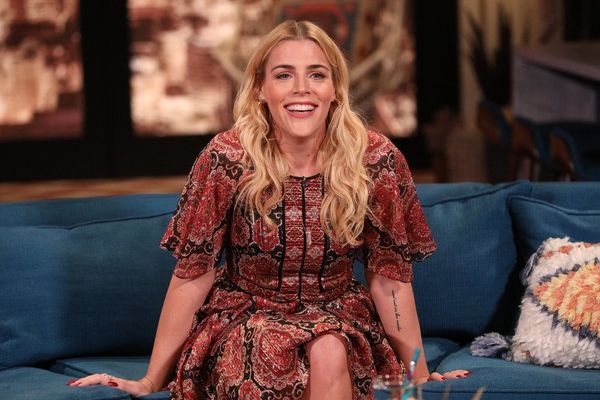 Busy Philipps is famously open and honest about many aspects of her life, including her undying love for Oprah Winfrey. So you can imagine how she reacted when the media mogul herself called in to Busy Tonight on Thursday, December 20.

Philipps, a self-professed Winfrey superfan, installed a special “Oprah phone” on the set of her late-night talk show when the show first premiered back in October 2018. The phone was set aside just in case Winfrey ever decided to call, and when she did just that, Philipps lost it.

“NO!” Philipps excitedly screamed in disbelief when the phone unexpectedly rang. “I’m not ready for this!” she continued, already in tears, as she made her way to the yellow Oprah phone.

“I’m calling to make sure this doggone phone works,” Winfrey said from the other end of the line.

“Oh my God, it does, it does,” Philipps said, wiping away her tears. “It does. It’s for you, anytime you want to call. We can talk about whatever. Harvest Day, or just, like, vegetables.”

Winfrey frequently shares Instagram updates about her massive fruit and vegetable garden, including regular harvest days. In fact, she just so happened to be harvesting on the day she called. “I just came in from the garden, I have some of the hugest tangerines I’ve ever seen,” she said.

When Philipps told the icon that the harvest photos brought her so much joy, Winfrey responded in kind, offering the actress some encouraging reciprocal words. “I’m so happy that you get joy from [them],” she said. “I’m so happy that you’re on late night — it’s so good to see a woman on late night!” She then told the Busy Tonight host to come and see her sometime, which, of course, we will totally be watching for on Philipps’ Instagram stories.

What would you do if Oprah called you? Let us know @BritandCo!