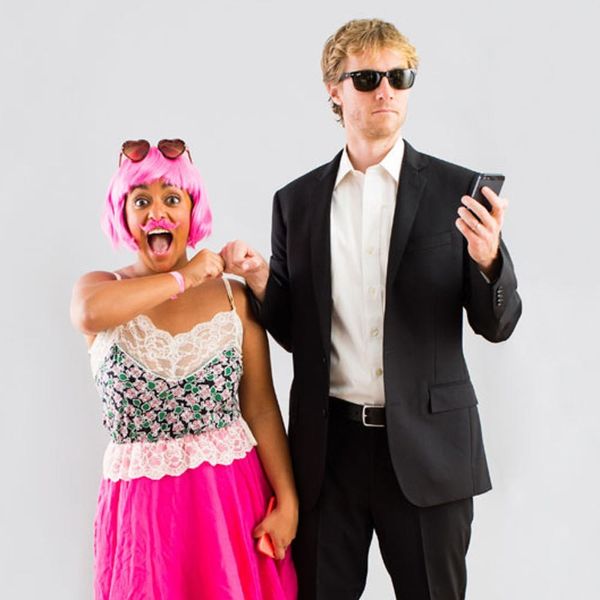 Couples costumes can be anything you want them to be. They can be punny, like the genius Netflix and Chill, they can feature your other better half — your bestie — heck, they can even be for you and your DOG. But to make a couples costume really work on Halloween you need one important thing: someone else to agree to your shenanigans.

To help us sift through the thousands of couples costume ideas out there and come up with a look you and your SO will say yes to, we enlisted the help of a member of the Bro + Co community. Canaan Smith is a country star who we’ve had our eyes and ears on ever since we first heard his hit “Love You Like That.” We have something deeper in common with Canaan than just an appreciation of good music and any/all things Nashville though. The singer songwriter (and wife Christy Hardesty — who he met at a concert — swoon, folks, swoon) also shares our love for Halloween.

As anyone who’s tried it knows, couples costumes are an art and Canaan admits he and Christy haven’t nailed it just yet. Their best look so far? “It wasn’t a real couples costume,” he shares with us. “but one year I went as Willie Nelson and she was dressed as a Google Map Dot. I would say that was probably our best year.”

For Halloween 2015, fate tried to steer the pair to a Star Wars-themed look. Canaan dishes: “This year, we got a package sent to our house accidentally that was meant for someone else. It had three storm trooper costumes in it, which was awesome, but they were all kids sizes! Trust me, if they were our sizes we’d be wearing them.”

To help the force be with you on last minute Halloween plans and to find inspiration of his own for this year, Canaan took a look through Brit + Co’s best couples costumes — both DIYs and our Internet faves — and selected his all-time favorites below!

1. Popeye + Olive Oil: The classic never gets old and is usually buyable or easily DIYable with a few basics and colorful felt pieces. (Photo via @ritacykim)

2. Party Animals: This easy, last minute costume only requires your Sunday best, your masks of choice and a couple flutes filled with Champs. (via Brit + Co)

3. Axl and Slash: It’s Halloween! Even a country star gets to switch genres ;) (via Brit + Co)

4. Pinata and Birthday Girl: Crazy creative. If we do say ourselves. (via Brit + Co)

5. Homer and Marge Simpson: Let’s call this one a new age classic — and props to anyone willing to go through all that yellow bod paint! (via Costume Works)

6. Uber and Lyft: This is the Halloween couples costume equivalent of modern romance. (via Brit + Co)

Before Canaan sets out on the road for his first headlining Stompin’ Grounds tour, (watch the video he just dropped for new single “Hole in a Bottle” here!) he and Christy have a genius Halloween date planned. “We’re going to go to one of those Zombie Hayrides where you shoot zombies with paintball guns. Perfect way to blow off steam and celebrate. Ha!” We’re picturing a “zombies in love” couples costume for this country couple… anyone else?